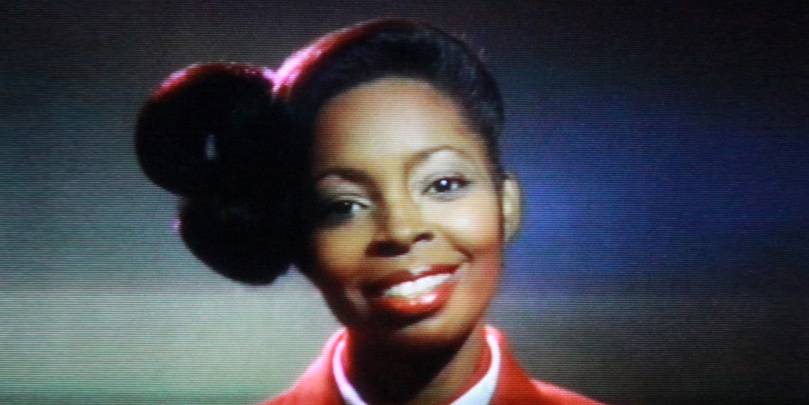 Although she only worked at Star Tours briefly, safety spokesperson Vesia Treacy is immortalized as the familiar face, gentle voice, and distinctive hairdo of the pre-boarding video announcer.

Born on Chandrila and raised on Alderaan, Vesia and her diplomat parents were luckily vacationing on Naboo when Grand Moff Tarkin demonstrated the first Death Star’s prime weapon for Leia Organa. This good fortune developed an understandable fondness for travel in the young Vesia. When the tyrannical Empire was overthrown and replaced by the New Republic, Vesia sought employment in the fledgling travel and tourism fields… though she channeled her outrage at Alderaan’s destruction and other Imperial cruelties into subtle political statements such as her traditional Alderaan hairstyle.

Her supervisors at Star Tours recognized in their newest Astro Attendant all the qualities that might make her a good holo-spokesperson: natural beauty, gentle manner, and remarkable poise and elegance for someone so young. Her knowledge of travel routes and safety procedures were equally impressive.

Shortly after the pre-boarding safety video was recorded, Vesia learned from internal debriefing memos (conducted with rookie pilot, spunky astromech, and shaken passengers) that the remnants of the Empire had built yet another Death Star. She resigned within days and began her new career, in politics, where she became an outspoken champion of causes such as refugee relocation and bans on the use of super-weapons.

To this day, Vesia says that people often recognize her in public and can quote her safety spiel to her from memory. She always smiles and thanks them for flying with Star Tours.

This entry is from the Imagination of Alex Newborn

Note: May have to adjust the sound on the video.

The actress in this video at Disneyland and Disney Hollywood Studios is Stephanie Taylor. (source WDI)

Alex Newborn
Alex is a lifelong fan of the Star Wars movies and everything Disney, so his obsession with Star Tours comes as no surprise. Born in 1970, Alex visited Walt Disney World for the first time in 1975, and saw the original Star Wars film in its first theatrical run in 1977. He returned to Disney in the 80’s and the 90’s… riding STAR TOURS (twice!) on one fateful day in 1991. He has yet to visit Disney in the new millennium, waiting for both his children to be the required 40″ tall to ride STAR TOURS. “What I’d really like to see is a Tour chartered for the planet New Bornalex,” says Alex with a smile. The planet, mentioned first in Cloak of Deception, is a Tuckerization of Alex’s name, an honor bestowed on him in print by author Jim Luceno. Alex is currently at work on a partial realisation of his childhood Disney-in-miniature wish– he is constructing a hyper-accurate 1:18 scale Star Tours diorama to showcase his collection of park-exclusive action figures. In the meantime, Alex is always on the lookout for more STAR TOURS video or audio files, and other STAR TOURS memoribilia. Alex also is our site’s researcher, and comes with never seen before goodies, for your entertainment. Give him a round of applause guys.
Read more from Alex Newborn
Tags: Safety Spokesperson
Loading Comments...