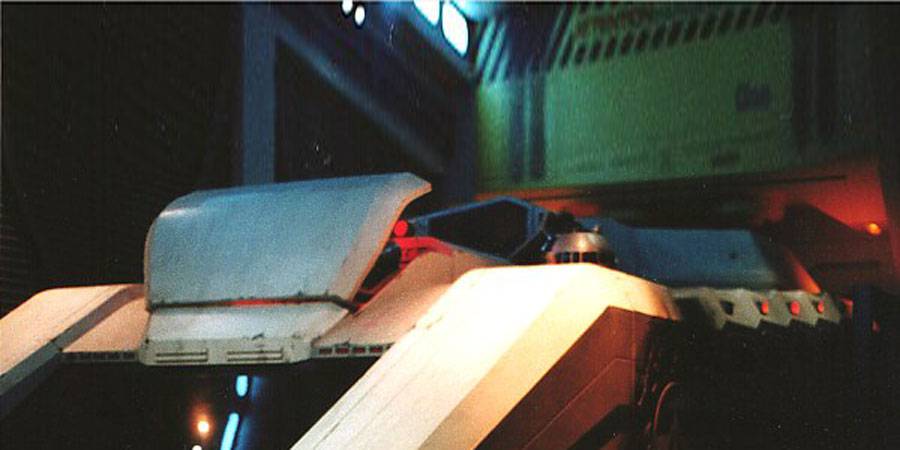 Star Tours is proud to introduce the StarSpeeder 3000, the most advanced transport of its kind in existence. With high-speed hyperdrive and a travel range of over one billion lightyears, the 3000 makes touring the galaxy safe and comfortable. And all our StarSpeeders are piloted by the newest, most reliable RX droids, so you can sit back, relax and enjoy the sights. Whenever your plans call for intergalactic travel, call on the best: Star Tours.
– Excerpt from the Star Tours Promotional Material

The ship is equipped with few amenities. The deflector shield is set at as minimum specifications as possible, while still conforming to BoSS safety regulations. The StarSpeeder also has a pair of forward-facing light blaster cannons, mostly designed for dealing with space debris.

Inside is not much better, featuring a spartan seating area, with only a single viewport at the front and not one SanFac (Sanitary Facility) to share amongst the 40 passengers. And the inertial compensator is practically non-existent, so be sure to fasten your safety restraints; it’s going to be a bumpy ride. With Star Tours, economy, not luxury, is the order of the day.

The Starspeeder 3000 is created using a Rediffusion Simulation (Later owned by Thomson-CSF) hydraulic motion base cabin featuring 4 degrees of freedom. The trade name for this simulator is Advanced Technology Leisure Application Simulator, or ATLAS. The Rediffusion ‘Leisure’ simulator was originally developed for a much simpler show in Canada called “Tour of the Universe”, where it featured a single entrance/exit door in the rear of the cabin and a video projector.

The film is front-projected onto the screen from a 70mm film projector located beneath the cockpit barrier.