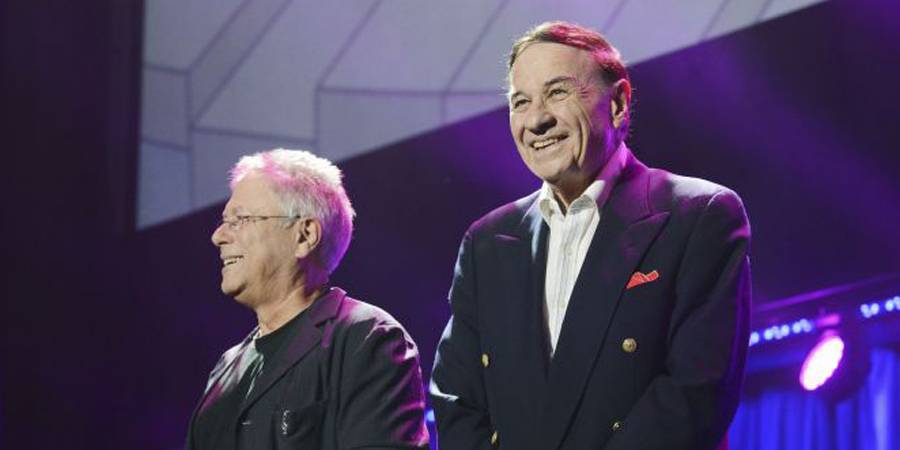 Brian Curran knows what a huge fan I am of Alan Menken. The first play I ever acted in was a 1989 production of Little Shop of Horrors; I’ve since played the Voice of the Plant three times as well as directed it as my first musical last October. I’ve also played the Genie in a production of Disney’s Aladdin Jr.; when the director asked if I wanted to replace the previous unsatisfactory Genie, I surprised her by singing “Friend Like Me” a cappella from memory, as I had used it as an audition piece many times.

So when Brian asked if I wanted to participate in a telephone conference call with Alan Menken, I was already saying yes before he even got to the icing on the cake, another Disney Legend would also be in the call: Richard Sherman. I’ve had Sherman Brothers songs recorded permanently in my brain for even longer than Alan Menken songs, ever since that first trip to Walt Disney World in 1976, especially that time we got stuck on ‘it’s a small world’! And despite the fact I’ve never set foot in Anaheim CA, the very first time I was researching the ride that Star Tours replaced, Adventure Thru Inner Space, I firmly believed I’d somehow ridden it partly because “Miracles from Molecules” was such a familiar and downright inevitable tune.

What follows is more or less the complete transcript of the conference call, which was held on Tuesday August 6th, just days before their Saturday night concert on the 10th. I have not credited individual question contributors for fear of misspelling their names, but if you wish to credit yourself in the comments feel free.
This will be uploaded in three parts.

Alex Newborn
Alex is a lifelong fan of the Star Wars movies and everything Disney, so his obsession with Star Tours comes as no surprise. Born in 1970, Alex visited Walt Disney World for the first time in 1975, and saw the original Star Wars film in its first theatrical run in 1977. He returned to Disney in the 80’s and the 90’s… riding STAR TOURS (twice!) on one fateful day in 1991. He has yet to visit Disney in the new millennium, waiting for both his children to be the required 40″ tall to ride STAR TOURS. “What I’d really like to see is a Tour chartered for the planet New Bornalex,” says Alex with a smile. The planet, mentioned first in Cloak of Deception, is a Tuckerization of Alex’s name, an honor bestowed on him in print by author Jim Luceno. Alex is currently at work on a partial realisation of his childhood Disney-in-miniature wish– he is constructing a hyper-accurate 1:18 scale Star Tours diorama to showcase his collection of park-exclusive action figures. In the meantime, Alex is always on the lookout for more STAR TOURS video or audio files, and other STAR TOURS memoribilia. Alex also is our site’s researcher, and comes with never seen before goodies, for your entertainment. Give him a round of applause guys.
Read more from Alex Newborn
Tags: Richard Sherman, Alan Menken