CIV: Rex Did It! Touchdown On Endor

If you wandered by Mark’s fantastic Star Tours diorama at C4, you might have noticed one day that his custom StarSpeeder 3000 had gone missing, and was replaced by a note that said: “Gone to Endor!”

Diorama builders Mark Patton and Frank D’iorio (aka Niubniub) had this special treat in store for convention attendees at Celebration IV … they briefly combined elements from their Star Tours and Endor dioramas to commemorate the 20th anniversary of Star Tours with something that many of us thought would simply never happen!

And sure enough, after a mere twenty years of wrong turns, the StarSpeeder piloted by Captain Rex had FINALLY made it to the Forest Moon of Endor!

I can just hear that See-Threepio action figure asking, “Artoo-Detoo, where are you?” Amazingly enough, for those of us who know Rex, he seems to have made a very soft landing. I’d have expected the ship’s nose to be buried in the dirt, or at least a few Endorian redwood trees to have had their bark scraped off as he descended.

I can just imagine those 40 tiny passengers, all the size of action figures, staring out the front viewport as their speeder was surrounded by curious Ewoks. Doubtless, some of them were thinking, “Well, this was rather sedated. I wish we’d booked that flight through the combat zone instead.”

All joking aside, we here at swstartours.net want to say a big thank-you to Mark and Frank for this perfect moment of wish-fulfillment. Apparently, Rex finally got “used to his programming”– if only for this one day.

And if you haven’t seen Mark Patton’s Star Tours diorama in all its glory yet, read on through our original report.

Thanks to Josh Eash for additional photo. 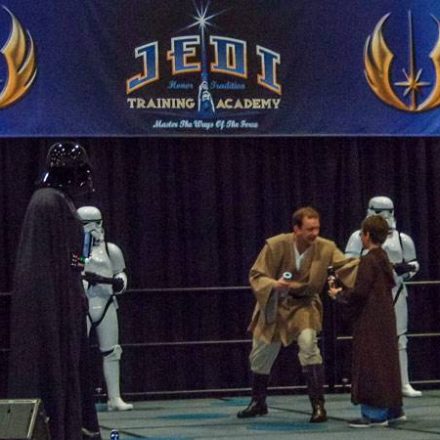 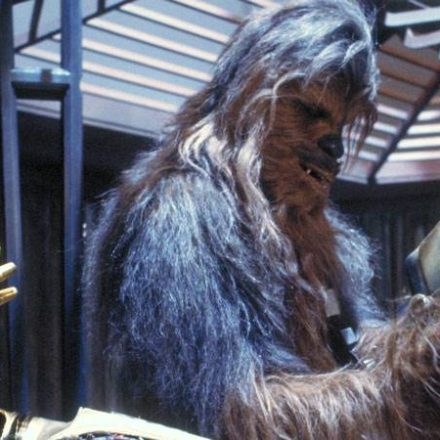 May 27, 2007 Brian Curran
Don’t always believe what you read on the IMDB. We showed Peter Mayhew this photo and asked if he was in the Chewie costume for the Star...