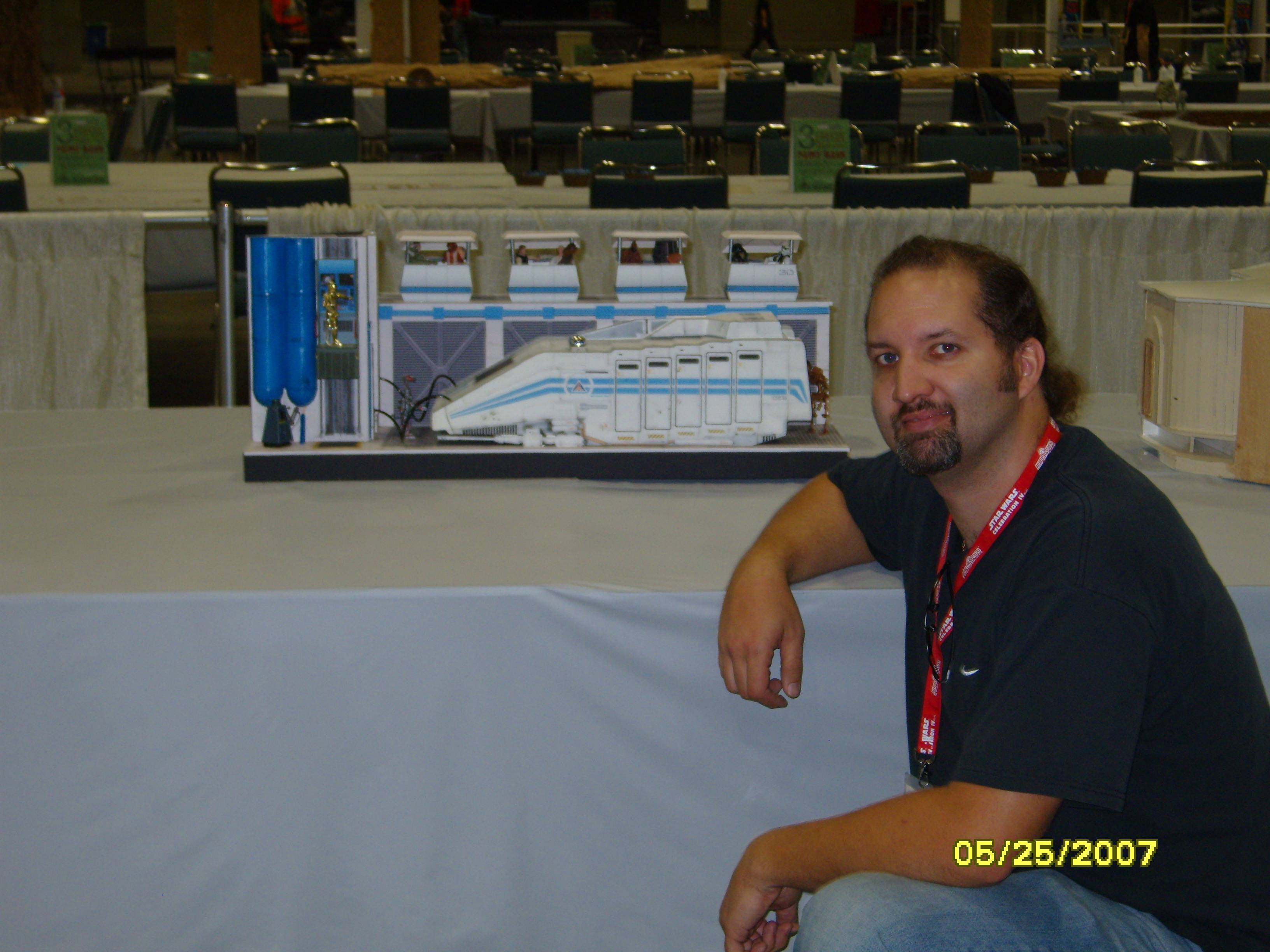 Here’s Mark Patton posing beside his diorama masterpiece, a miniature recreation of the Anaheim Starport scaled to Hasbro action figures.

Some of you may have met Mark while he was helping out Frank D’iorio (aka Niubniub) over at the Ewok Landscaping area.

For endorexpress.net’s coverage of the Ewok Landscaping diorama, click here

Mark told our own staff reporters/photographers Brian Curran & Paul Hruby that he finished this diorama Wednesday night… only a few hours before bringing it to CIV!

The number 30 on the Peoplemover Car is a tribute to Star Wars‘ 30th Birthday.

Note how all the figures in the People Movers are characters from 1977’s A New Hope?

Next are Rebellion heroes Luke, Han, and Chewie– dig the vacationing pose of Chewie achieved by use of the Dejarik Champion Chewbacca figure.

In the third car are some Jawas and a Gonk droid; and representing the Imperial forces in the final car are a TIE Pilot, Sandtrooper, and Stormtrooper. The use of figures specific to A New Hope is a nice attention to detail, as a tribute for the film that started it all.

A goose-droid from Sector 2 has ‘migrated’ into the main hangar bay to assist Threepio and Artoo with repairs on this StarSpeeder.

WEG-1618 has apparently borrowed Chewbacca’s welding tools and moved into the main hangar to check the thrusters on the SS3K. Note that Mr. Patton has even perfectly recreated the hinged roofs of the People Mover trams. Stay tuned for more info!

Thanks to Alex Newborn for help with this article. Additional photos by David Yeh.

Alex Newborn
Alex is a lifelong fan of the Star Wars movies and everything Disney, so his obsession with Star Tours comes as no surprise. Born in 1970, Alex visited Walt Disney World for the first time in 1975, and saw the original Star Wars film in its first theatrical run in 1977. He returned to Disney in the 80’s and the 90’s… riding STAR TOURS (twice!) on one fateful day in 1991. He has yet to visit Disney in the new millennium, waiting for both his children to be the required 40″ tall to ride STAR TOURS. “What I’d really like to see is a Tour chartered for the planet New Bornalex,” says Alex with a smile. The planet, mentioned first in Cloak of Deception, is a Tuckerization of Alex’s name, an honor bestowed on him in print by author Jim Luceno. Alex is currently at work on a partial realisation of his childhood Disney-in-miniature wish– he is constructing a hyper-accurate 1:18 scale Star Tours diorama to showcase his collection of park-exclusive action figures. In the meantime, Alex is always on the lookout for more STAR TOURS video or audio files, and other STAR TOURS memoribilia. Alex also is our site’s researcher, and comes with never seen before goodies, for your entertainment. Give him a round of applause guys.
Read more from Alex Newborn
Tags: Hasbro, action figures, Mark Patton, Diorama
Loading Comments...