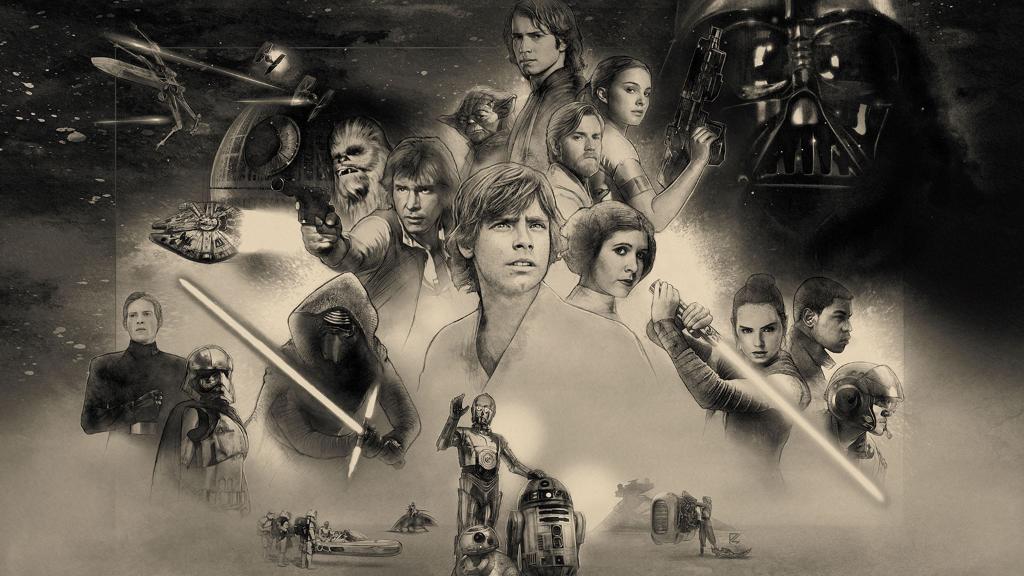 By now you’ve seen all the artwork shown for Star Wars Celebration Orlando as well as every single badge, remarkable sketches of our favorite Star Wars characters, beautifully rendered, that in itself a rarity these days. All of those incredible drawings are are through the hands of UK-based Illustrator Paul Shipper. When I first discovered the work of Paul, it was years ago at an art gallery in Los Angeles and I was blown away by a poster for Disney’s underrated The Lone Ranger. I bought It and I realized that it was my first movie poster purchase since the days of Drew Struzan. It was only by chance that I would later meet Shipper through a mutual friend, at Disneyland of all places, where we became friends with many of the same interests. Fast forward to now, where every Star Wars fan has seen his work. We caught up with Paul over the phone last week to talk Star Wars and Disney and the current state of movie posters.

EE: How excited are you for Star Wars Celebration?

Paul: Oh, very excited! Very excited. I can’t wait to fly over and geek out about Star Wars with all of the fans.

EE: It’s quite the experience! Have you gone to a previous Celebration?

Paul: I was lucky enough to get a ticket for Celebration in London last year. A friend of mine who lives in New Zealand couldn’t make it.

EE: That really worked out for you!

Paul: Yeah! And one of the great things to come out of that career-wise was that I got to meet the folks at Empire Magazine in person, and being a huge Empire Magazine fan, I met the creative director and we since stayed in touch. I did a gig for them late last year with the unfortunate news of Carrie Fisher’s passing, for which they contacted me to do an illustration for their tribute, which was a huge honor. If I hadn’t gone to Celebration, I don’t think that opportunity would have come either.

EE: A lot of fans go to these gatherings to meet their Star Wars heroes both in front of the screen and behind… and I have no doubt that you’ll become a new hero to many with all your work for Celebration Orlando. Can you talk about how that all came together?

Paul: Yeah, towards the end of last year I got an email out-of-the-blue from Lucasfilm asking if I’d be interested in creating the key art and badge art for Celebration Orlando. I literally thought about it for half a second and said “yes! I would love to!”

EE: You did every single badge…

Paul: That’s going to be quite surreal for me. I think this is going to be the most widely seen art work I’ve probably ever done. It’s a huge honor and priviledge to be asked.

EE: Let’s talk about the 40th Anniversary Poster, which will be available for purchase. Have many people commented on why certain characters aren’t present?

Paul: It was pretty difficult because the 40th anniversary is quite monumental. The galaxy in Star Wars is so huge and vast with so many loved characters, I went through a number of ideas and revisions – some were just too busy and there’s just too much going on. When we ended up doing the final, we talked about it a lot and some just ended up not being in the final. It was a case of deciding that it’s the Skywalker Saga in a way, from the Prequel Trilogy with young Anakin Skywalker to the Original Trilogy with Luke Skywalker onto the Force Awakens, with new characters like Rey and Finn and Kylo Ren – it has to encompass that into a family portrait in a way.

EE: What have fans said about the lack of Rogue One characters? Will there be more characters added on from say, The Last Jedi?

Paul: Yeah, there’s a lot of “where’s this character?” or “where’s that character?’ and they were in some of the drafts but it got fine-tuned. I also don’t know where The Last Jedi is going when making this and they didn’t want to suggest anything in it really. We got the Han Solo movie coming up which I asked “can we put the new Han Solo in the poster?” and they’re all “no”. It’s already so vast so it’s very difficult to nail something like this.

EE: Do you have a favorite character to draw? Doesn’t have to be Star Wars.

EE: And Harrison Ford is not the easiest likeness to get right!

Paul: I’ve been lucky enough to go on a few holidays with my mum and dad there in the early nineties – I’ve been to Orlando maybe three times, the last time was with a friend and we did all the parks as well. But it’s been a long time since I’ve been to Florida and to Disney World, so I know it changed a lot so it would be fun to see all the changes if I get to go again.

EE: How did you like the Indiana Jones Adventure in Anaheim?

Paul: Yeah, I really liked it! I thought Indiana Jones would be in it more, but even the queuing up is fun. I went with my daughter last time and she wanted a fedora and I bought myself one, I got like twelve now. [laughs]

EE: Let’s hop on a time machine back to when you were a kid – what posters did you have on your wall?

Paul: Whew, there were many. If I think back, the height of my poster collection at the time when I realized who Drew Struzan was, I had a lot of Indiana Jones posters. I also had Ansel’s Raiders of the Lost Ark poster on the wall as well. Hook, Cutthroat Island, which the movie wasn’t that great but the poster was really good. Currently, the 10th Anniversary Star Wars poster that Drew did and I don’t have that many up on the wall at the moment. I have the Martin Ansin The Rocketeer screen print and a few other Drew pieces that he sends out for Christmas.

EE: We all love Drew Struzan and he was clearly an inspiration for you. Did you guys ever meet?

Paul: I contacted Drew in the mid-90s by FAX! “How do I become a movie poster artist?” I asked and he faxed me back that very same night – I was blown away.

EE: First of all, how do you get his FAX number??

Paul: Haha that’s another story! When I was in art college my teacher at the time gave me a book that had an article with Drew Struzan in it. I held onto it and read it a lot, and one day I flipped to the back of the book and it had a ‘Contributor’ list. Drew’s phone and fax number was there. I held onto it for a few years and one day I just thought “what have I got to lose?” I told him that this is what I wanted to do and he was the reason why I wanted to do it. A couple of years after that when I graduated from university in 1997, a friend of mine suggested we go on a trip around the U.S. So we organized this trip along the West Coast and it turns out we were going to be in Los Angeles for a day and a half and I don’t know why but I decided to message Drew and sent him another FAX. He got back to me with a hand written fax to give him a call when we get into town and see if we could work something out. It was the most amazing day – we spent the whole afternoon in his studio and looked around. I took my portfolio with me just to show him and he was really gracious with his comments.

Paul: Another funny thing was that I had a 16 mm camera with me and towards the end of the day before we were about to leave I asked him, “Drew, do you mind if we got a picture?” He’s like, “Why? Couldn’t you just remember the day?” [laughs] I wasn’t expecting that kind of reaction! I felt a little uncomfortable, but my friend took a photo. It was a day I won’t ever forget.

EE: That’s hilarious. Now, Drew is retired but you’re staying pretty busy. What do you think is the current climate of movie poster making? Is it better or worse than it has been?

Paul: I think it’s changing for the better. There’s a lot of creative people that are from the era that love the illustrated movie poster, but even if the posters aren’t illustrated, the mindset of the people that are creating a lot of the posters are a lot better than they were ten years ago, fifteen years ago. I do feel bad when people diss the photoshop work… they use photoshop like it’s a dirty word but I use photoshop to create my posters these days – the program is so versatile. I think movie posters today, there’s a lot of amazing, great people working on them, and they’re incredibly complex and have to be used in different formats: billboards, websites, banners – it has to be used in so many different ways for all these applications. I really like the new Guardians of the Galaxy Vol 2 posters, and the first Guardians poster too. It was very reminiscent of the old Star Wars posters even though it’s photographic, it has the touch of creative people on it. It’s not just slapped on. I think a lot of the posters that are coming out get a bad rap but I like a lot of them. I can see how much effort goes into them and for me, the stuff I like to do has a certain aesthetic feel to them which is reminiscent of the Drew Struzan posters which is where I’m coming from. I worked with a few agencies – they’re wonderful people to work with and when a project comes along where an illustrative approach can work, they consider it. With limited edition posters in the last five-ten years, it’s also been a great boost. Collectors are getting into them as well. Some of the IMAX posters that are commissioned are pretty good too. That kind of thing, the studios feel less pressure and are willing to do something different. But when it’s a main theatrical campaign the pressure is so high that tend to play safe quite often. That Logan poster was apparently illustrated on an iPad Pro. The Stranger Things artwork he did on his iPad so it’s all changing and it’s for the best.

EE: Thanks so much for jumping on!

Paul: No, no it’s a pleasure, David! It was nice chatting!

Paul: Yeah, I’ll be there at the store signging – maybe I’ll take a picture of every badge that I sign!

David Yeh
A long time fan of both Disney and Star Wars, he has a hard time resisting the temptations of Disney’s merchandising force. If you see pictures of the toys and pins, you can bet they are from Dave, our resident collecting guru.
Read more from David Yeh
Tags: Art, Paul Shipper
Loading Comments...