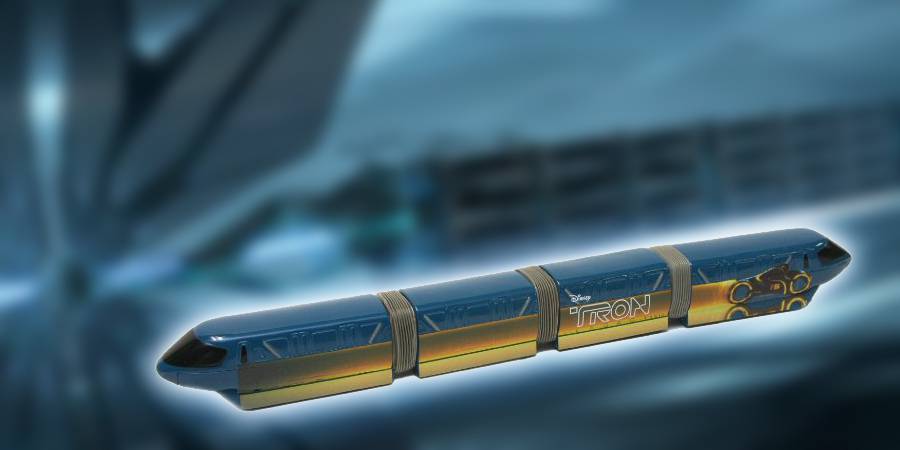 Today we have a sneak peek of the Disneyland Monorail play set and the die cast Tron Legacy Monorail “TRONorail” set. Where will they debut? How much will they cost?

This is a full working battery operated Monorail toy, similar to the Walt Disney World toy.  The Disneyland version features the new Disneyland Mark VII monorails.  This toy features select tracks of on-board audio that are heard while riding the Disneyland Monorail.  It also has an all new remote control feature.  You can start, stop, reverse, and activate sound from the remote.  It does have pop-open top passenger cabins and comes packed out with articulated micro-characters for additional play.

Disney will be releasing a small quantity “sneak peek” of the new Disneyland Monorail Play set at the D23 Expo. A full release date has not been confirmed yet, but it will likely be towards the end of this calendar year.

Since the original TRON debuted in theaters, the TRON franchise has always enjoyed a very passionate and dedicated fan following.  To market the new TRON Legacy film, the TRON Monorail (The “TRON-O-RAIL”) was created at Walt Disney World.  Since the launch of the Monorail, we have been repeatedly asked to create a toy replica of the TRON Monorail.  Although we never originally intended to do a toy version of the Monorail, D23 presented a very unique opportunity to create a LE toy, such as this, that would have strong Disney affinity appeal.  Even though the TRON Monorail does not run at Disneyland, the presence of ElecTRONica has given the TRON brand a strong presence at the west coast resort.  For a toy, the edition size is pretty small, but the Disney Theme Park Merchandise team is hopeful that there will be enough quantity to satisfy all of the guest requests that they have received over the last year.

The TRON Monorail is a limited edition push-a-long die-cast, approximately 12″ in length.  The edition size is 3000 pieces.  It is being introduced at D23.  If there are still quantities available after D23, it will be distributed among Walt Disney World and Disneyland park locations.

Thanks to Disney Theme Park Merchandise for the information and images.

Brian Curran
A Star Wars Fan since 1977 when he was just 2. Brian grew up in California where his family would often make trips to Disneyland. In 1987 he took his first “Trip to Endor” and doesn’t pass on a chance to go back! He also enjoys going to Conventions and meeting the actors from the Star Wars films.
Read more from Brian Curran
Tags: Tron Legacy, TRONorail, monorail, merchandise, Disney, D23 Expo, Tron
Loading Comments...