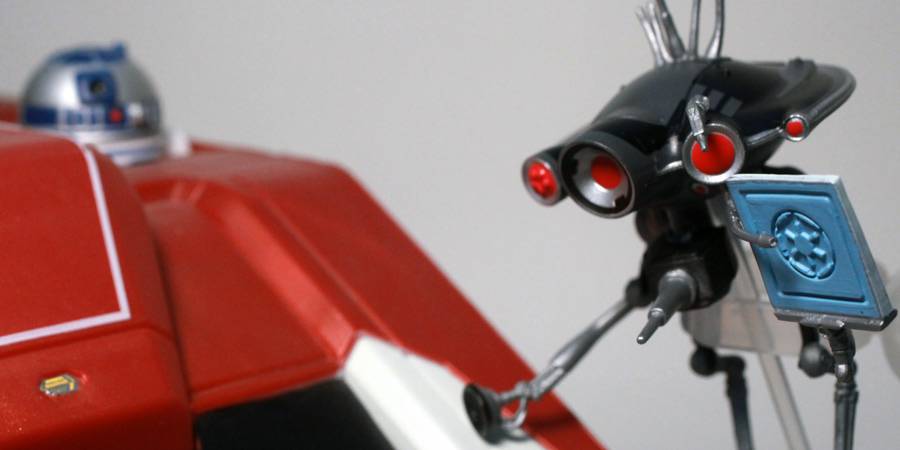 The Disney Theme Park Merchandise team has delivered another Star Tours action figure set for purchase.  The “Search for the Rebel Spy” arrived just in time for Star Wars Weekends in Florida to both U.S. Disney Resorts.  Made by Hasbro, these action figures are of the same quality that you would expect to find and in perfect scale with your other Star Wars figures and vehicles and of course with the Disney released Starspeeder 1000.

Included in this set is a Signal Droid, Seeker Droid, and Imperial Sky Trooper; but only the Seeker Droid is 100% new here.

We’ve seen the Imperial Sky Trooper released previously in the “Ambush at Star Tours” set but since you need four of these guys to complete the scene in Star Tours, this is a welcome troop builder.

The Signal Droid is a blue repaint of the original red released in the “Star Tours Travel Agency” set. The blue Signal Droid can be seen at the end of the Coruscant destination.

The Seeker Droid is a brand new design and new figure based on the droid seen in the Stormtroopers opening of Star Tours: The Adventure Continues.

This set can be bought for $34.95 at Disneyland, perhaps more at Walt Disney World.  Despite the price increase, this is a must have for Star Tours enthusiasts!

All photos by David Yeh

David Yeh
A long time fan of both Disney and Star Wars, he has a hard time resisting the temptations of Disney’s merchandising force. If you see pictures of the toys and pins, you can bet they are from Dave, our resident collecting guru.
Read more from David Yeh
Tags: Hasbro
Loading Comments...