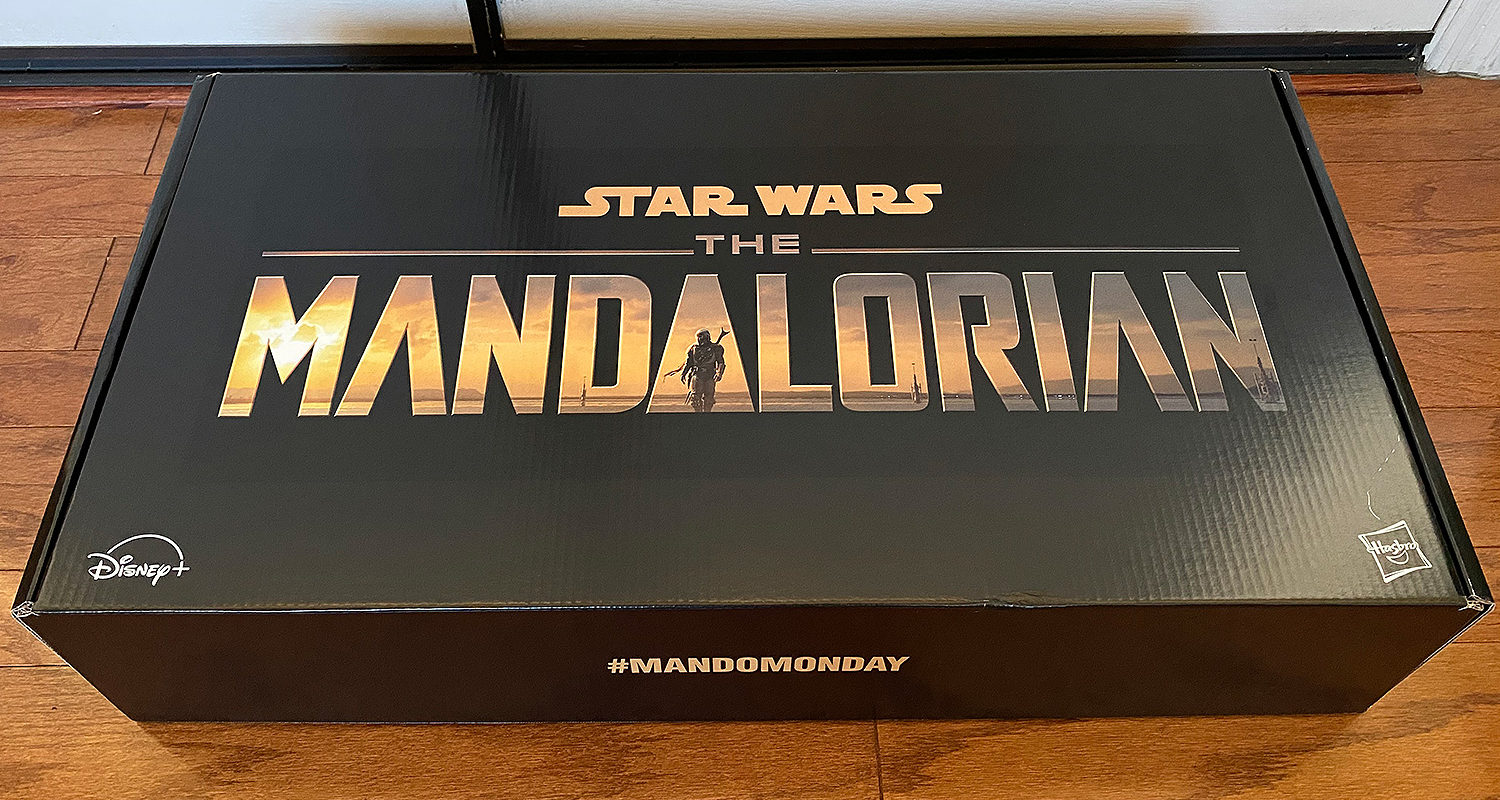 With every episode of The Mandalorian Season 2 dropping on Fridays, Monday has become the day where Hasbro and several other vendors are dropping new merchandise for purchase. To prove just how serious they are, Hasbro sent a free care package which we’ll show what’s inside below.

But while not everyone is lucky enough to receive this insane bounty, you too can celebrate Mando Monday every Monday through December 21st by visiting: MandoMondays.com to see all the latest reveals; as well as Hasbropulse.com and Hasbro Pulse on Instagram to see the latest Mandalorian-themed product from Hasbro.

Let’s take a look inside this Mando Monday box courtesy of Hasbro!

Imagine traveling around a dangerous galaxy where Imperial enemies threaten the safety of the Child, the character fans call “Baby Yoda”. In the MONOPOLY STAR WARS: THE MANDALORIAN Edition board game, players can play as The Mandalorian, Cara Dune, IG-11, or Kuiil. Getting the Child token lets players enhance their characters special ability and use the Child’s unique ability. Buy hideouts, win battles, and earn Imperial credits. The player with the most Imperial Credits wins, but be vigilant! If an Imperial enemy captures the Child, the game’s over for everyone!

Fans and collectors can recreate scenes from the Lucasfilm series The Mandalorian, on Disney+, with this premium STAR WARS: THE BLACK SERIES CREDIT COLLECTION 6-INCH Figure Assortment. As part of the STAR WARS: THE BLACK SERIES CREDIT COLLECTION these figures feature multiple points of articulation premium deco, a collectible Imperial Credit accessory, and packaging that has been treated with a weathered look inspired by the end credit images from The Mandalorian, making this a great addition to any STAR WARS collection. Includes figure, accessory, and Imperial Credit. Each figure sold separately.

Fans and collectors can recreate scenes from the Star Wars galaxy with the STAR WARS: THE VINTAGE COLLECTION CARBONIZED COLLECTION 3.75-INCH THE MANDALORIAN Figure Assortment, inspired by the Lucasfilm series, The Mandalorian, on Disney+. The STAR WARS: THE VINTAGE COLLECTION CARBONIZED COLLECTION features multiple points of articulation and is treated with a sleek metallic finish for a premium figure that really stands out. Highly possible with realistic detail, this 3.75-inch figure can be displayed with your STAR WARS action figure and vehicle collection. Includes figure and accessories. Each figure sold separately.

STAR WARS: THE BLACK SERIES 6-INCH THE MANDALORIAN FIGURE and THE ARMORER FIGURE

Fans and collectors can imagine scenes from the STAR WARS galaxy with this premium STAR WARS: THE BLACK SERIES 6-INCH THE MANDALORIAN figure and THE ARMORER figure.

Available for pre-order at Walmart.

From Hasbro is Series 2 of the STAR WARS: THE BOUNTY COLLECTION. THE CHILD 2.2-INCH Collectible figures, inspired by the super-cute character from the hit Lucasfilm series The Mandalorian, on Disney+! With 6 figures to choose from, kids and fans can collect fire 2-packs featuring fun poses such as “Child Pram” and “Mandalorian Necklace,” “Helmet Hiding” and “Stopping Fire,” and “Speeder Ride” and “Touching Buttons.” These 2.25-inch collectible are an awesome way to start a collection, swap with friends, give as gifts, or display in any STAR WARS collection.

Blast off into a galaxy of adventure with the STAR WARS MISSION FLEET vehicles and figures! These fun vehicles and figures allow kids to imagine action-packed battles between the dark side and the light side of the Force. Boys and girls will love pretending to race through deserts with the STAR WARS MISSION FLEET THE MANDALORIAN BATTLE FOR THE BOUNTY Vehicle and Figure, featuring a reposition able projectile launcher. The included 2.5-inch-scale the Mandalorian figure features multiple points of articulation, with design and detail inspired by the Lucasfilm series. Includes vehicle, figure and 12 accessories, featuring additional the Child and hover-pram accessories.

Another thanks to Hasbro for sending this along!