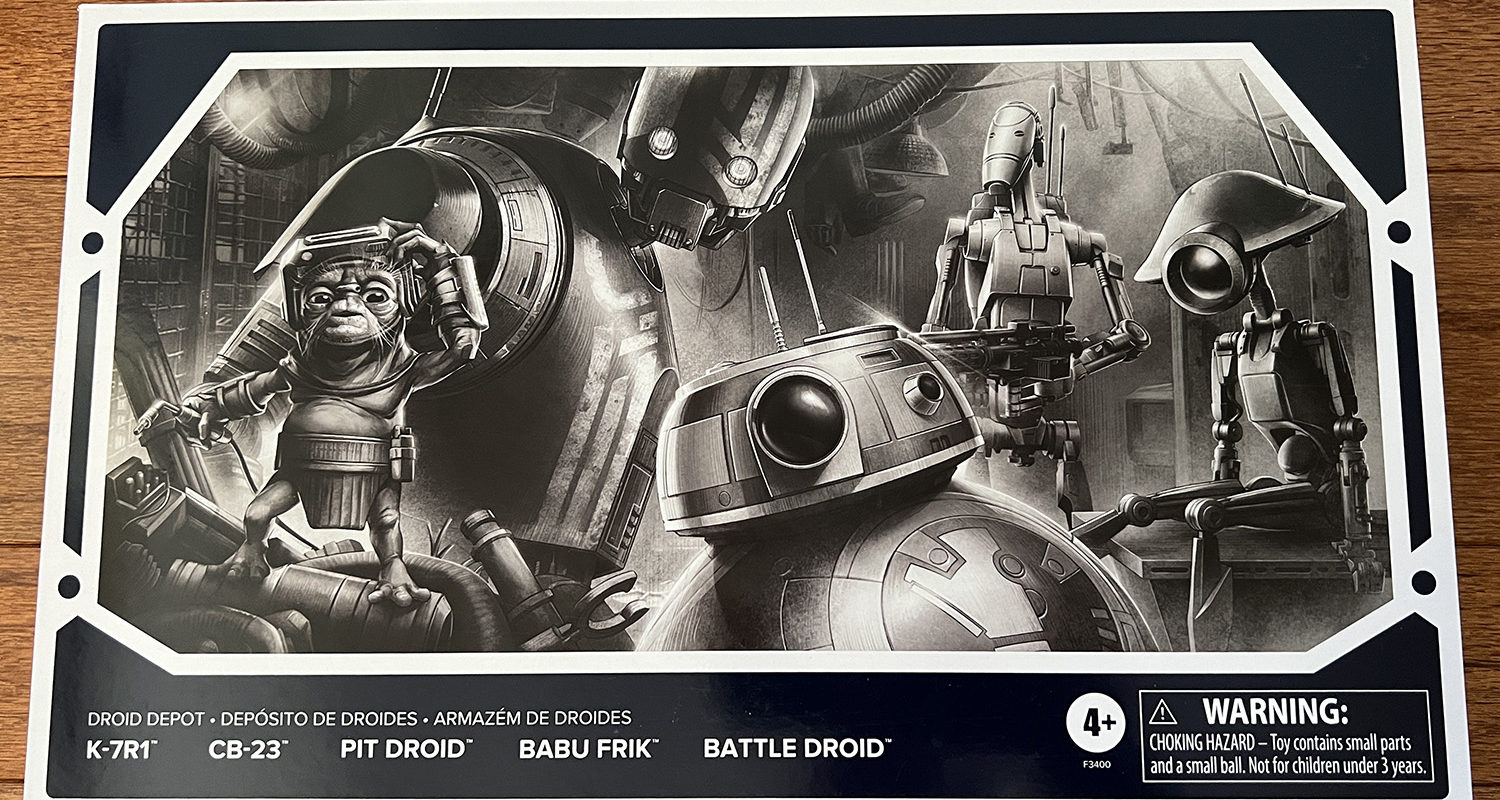 These sets should be appearing inside the parks soon enough, and if they’re like the previous figure sets, there should be plenty to go around. Let’s take a closer look at this set and whether or not it’s something you should be picking up for yourself…

K-7R1
Hoping to be reactivated, the KX security droid with black and white plating known as K-7R1 was dismantled and displayed in the Droid Depot by the proprietor Mubo.

K-7R1 is a direct repaint of the previous K-2SO figure and contains about 25 points of articulation. You can see some of the paint deco doesn’t exactly line up with the one in the parks but it’s a minor quip.

CB-23
A maroon and turquoise BB astromech unit, CB-23 is a member of the Resistance and serves as Poe Dameron’s co-pilot for a short period of time while BB-8 was on another mission.

CB-23 is unlike the BB-8 figure but has a newly sculpted head. CB-23 does not appear in Galaxy’s Edge.

PIT DROID
The cheap and expendable pit droids often bolt out to repair still cycling superheated pod racer engines with no regard to their personal safety.

This is the very first appearance of the Pit Droid in The Black Series featuring about 15 points of articulation. You can almost get it to collapse but not quite the same as it does in film.

BABU FRIK
A tiny droidsmith normally found working among the Spice Runners of Kijimi, the well-regarded Babu Frik can reprogram or modify virtually any droid, regardless of the security measures protecting its systems.

Babu is a reissue from the C-3PO and Babu Frik Target Exclusive. While Babu doesn’t make any appearance in Galaxy’s Edge, it still might be good way for collectors to access this figure. He has articulated arms and goggles that can be lowered into position.

BATTLE DROID
The soulless ranks of of the Separatist armies are dominated by tall, thin B1 battle droids controlled by a centralized command center. They often suffer programming glitches t hat manifest as personality quirks.

The Battle Droid is a refresh from the previous single release of the Battle Droid, and while you’ll find only a few Battle Droids collecting rust in Galaxy’s Edge, if you like army building droids, this is a good one to build. The Battle Droid has about 17 points of articulation and comes with two different back attachments and one blaster rifle that can be held or plugged into his backpack.

So what’s the verdict? On a set that perhaps the equivalent of three figure releases, you are paying about $25 each, which for an exclusive is about right. Whether this set holds any value depends on how much you need/want the figures provided. The Pit Droid is the winner in this set since it’s the only place to get it so far, and CB-23 is another unique character. It’s great to have the K-7R1 since you can see him inside the Droid Depot. The Battle Droid being an army builder is always welcome but could be a figure I could easily swap out first. Babu Frik, is more of an accessory, but if you missed out on the first exclusive, it’s not a bad to have another chance at it.

Ultimately, if you’re collecting Galaxy’s Edge, there’s enough here that makes it worth picking up. Sets are available at ShopDisney and eventually at the Droid Depot in Galaxy’s Edge.