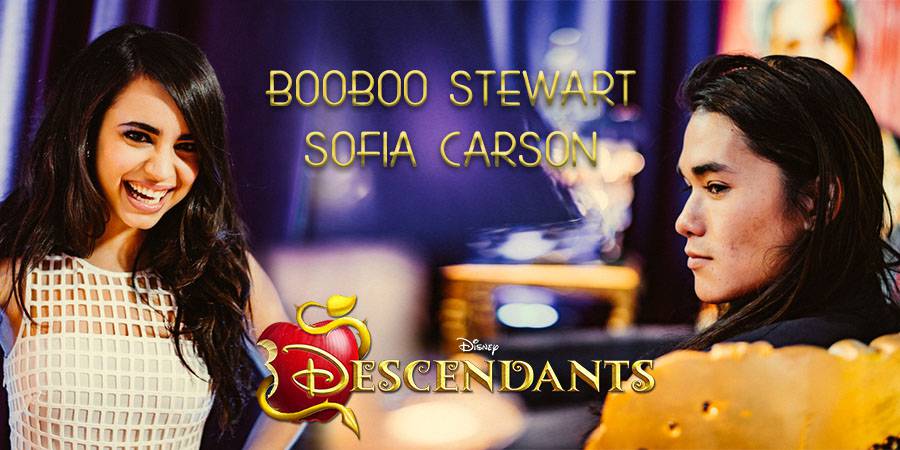 Disney Descendants, the brand new Disney Channel movie asks one big question: what if the children of the Disney Villains are allowed in Auredon Prep, the prestigious school where all the children of the Disney Royalty go to school. The movie can easily be described as the biggest Disney TV moment of the year, with an international release and merchandise in Disney Stores worldwide. We had the chance to travel to the Vondelkerk in Amsterdam to meet Booboo Stewart and Sofia Carson. Playing Jay (son of Jafar) and Evie (daughter of Snow White’s Evil Queen) they discuss life as an actor, playing the bad guys and pancakes. Pancakes? Well, read on!

What was your first Disney memory?

BBS: Mine was A Bugs Life. I kept watching it, I love that movie.

SC: do you wanted to be a bug?

BBS: I really wanted to be a bug!

SC: Did you like the grashoppers or the ants?

BBS: I liked the little flees that where part of the circus (imitates the flees)

Every kid dreams of being a Disney Prince of Princess, how does it feel of being a bit of a Disney Villain?

SC: We’re really evil villains. I mean, it’s cool because as a kid, no-one really thinks much of the villains, they are always set aside, and for once, the villains are in the foreground. So I’ve never thought as a child I would be playing one, in my mind I always ended up as the good princess. It’s even cooler to be the bad princess. The best of both worlds.

How quickly did the four of you got along?

BBS: Yeah, In the audition room!

SC: There was a photo of us on instagram, the first picture of the four of us together, and we where sitting on this carpet, pretending to be flying. And we where singing ‘A Whole New World’ from Aladdin. (starts singing .. ‘I can show you the world ..).

You are both being propelled to stardom with your face on about every bit of merchandise out there, do you collect them?

SC: Oh my God I have the funniest story about that. We where at Toys ‘R Us, and my grandparents where there to buy merchandise with my face on it, and we went and they bought everything. All the backpacks, all the lunch boxes, all the dolls. They moved all the toys and put the Evie dolls in front of the other ones.

BBS: That’s so epic! They can put the Evie doll in front of mine, because it looks like a girl!

SC: That was amazing! And then the lady at the cash register was looking at this pile of merchandise, and I was there in a hat. And with each item she scanned, she kept comparing the pictures on the merchandise to my face, and in the end he said: “you look a lot like her”. And I was just like “yeah .. I get that a lot”. And then my sister said: “well yeah, that’s because it IS her.”.

BBS: Of course she said that!

SC: it was so funny.

Booboo, you’ve been in Twilight and X-men, both worldwide phenomena, how do you compare that to working with Disney?

BBS: Honestly when I first came on the project and I heard Kenny (, director) was doing it. And all this hype about this film. I mean, there have been many different Disney Channel films before, ut this for some reason has this incredible excitement around it. And so between the excitement and Kenny directing it I just went to a read for the part and see what happens, and here we are now.

Can you still go out without hordes of fans following you?

BBS: Yeah, we still can!

SC: We get stopped occasionally, but it’s not like we can’t leave the house

BBS: If you went to Disneyland or any place with much children you are bound to be recognised of course. But walking around here, it’s nice.

Of course no-one expects you to walk around here

SC: True, no-one expects it, so we can just blend in.

Sofia, as an alumni of musical theatre, how do you compare that to the world of cinema?

SC: When I was younger I was mainly a singer and a dancer, and then I started acting a couple of years ago and start to go to auditions. So this was my first movie set, which is very different. There really is a big difference between standing in front of a camera compared to being on a stage. On stage you have one shot to do it. For a camera you have different takes, and the acting is different as well. It’s more subtle than theater, but it’s really cool. I fell in love with acting in front of a camera.

Booboo, with your martial arts background, did you do your own stunts?

BBS: Well, almost all of them! I’ve been doing martial arts since I was three, and I kept training. There was one stunt that I really wanted to do, but they wouldn’t let me, so I can’t take all the credit. It was a backflip of a pole that was 12 feet in the air on the roof, so they had to get an incredible stunt performer for that. He was one of the stuntmen in X-Men, so I already knew him, which was cool. He makes the best pancakes, so delicious.

What’s next for you guys?

SC: I just finished my second movie for Disney Channel, and it’s a remake of the classic 1987 movie ‘Adventures In Babysitting’ with Sabrina Carpenter, another Disney Channel Star. And that’ll come out next year. And I’m also working on my music. I’m working on my own album right now. So I’m writing that and I’m really excited about it.