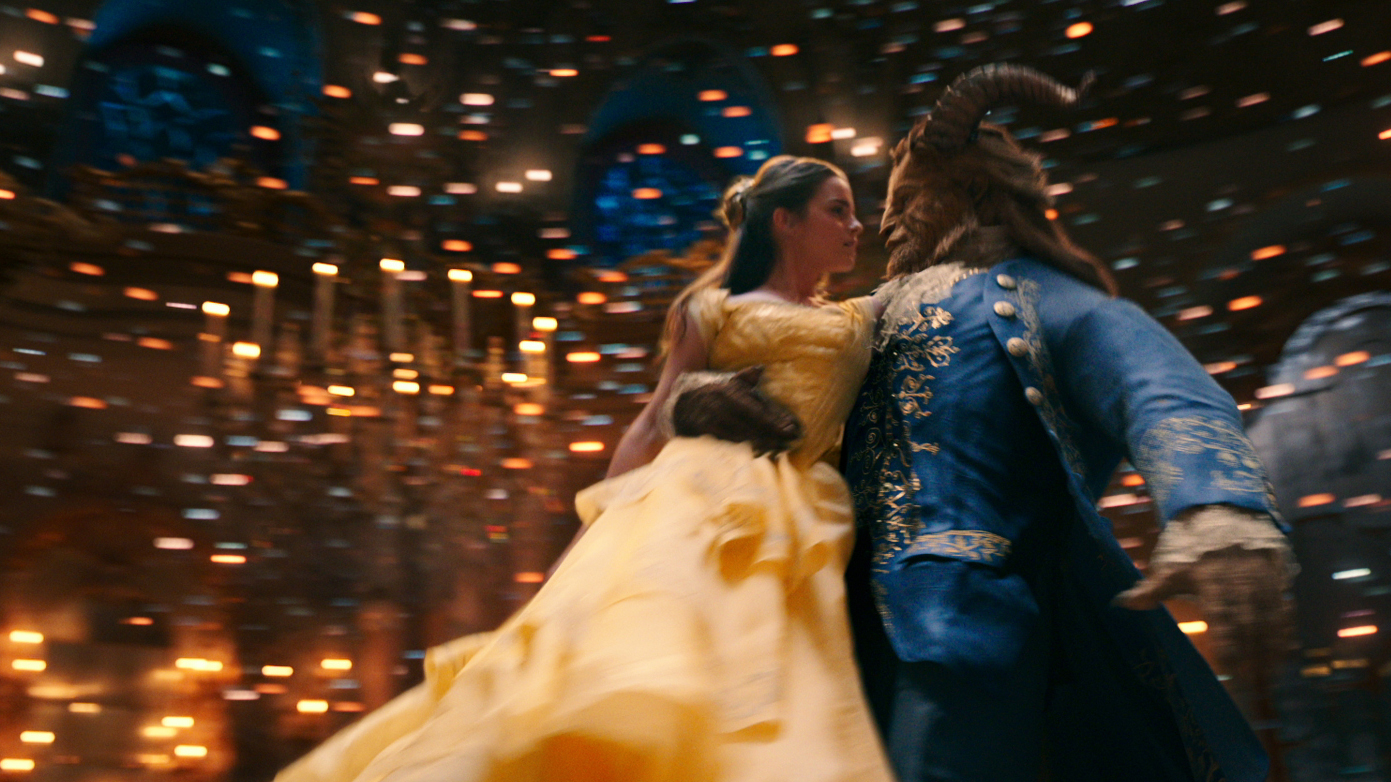 Disney’s updated Beauty and the Beast is coming to theaters and is sure to become a global hit – that’s why EndorExpress has two reviews from different part of the world. One is from site founder, Kris in Belgium, and the second is from staff reporter David in Los Angeles. Find out if a tale as old as time can reach as wide a net as Disney hopes for their latest animated live-action adaptation.

It really doesn’t feel like 1991 was that long ago. Still, 25 years ago, I was only 5 years old when the Disney’s animated Beauty and the Beast film was released, and it was one of those movies that has  always remained one of my all time favorite films (along with Aladdin and The Lion King).

The animated film, featuring a stunning cast, iconic music and an even more stunning visual look with cinematic sweeping movements,  was deservedly the first full-length animated movie ever to win a Golden Globe for Best Picture, and was even  nominated for Best Picture at the Academy Awards. Colours, mixed with great architecture, dramatic lighting and incredible scenery fill the stage with interesting characters that can all stand on their own. It really was the first movie that had a maturity that really connected with people.

We can all agree that this is a true perfect masterpiece. But, does it need an update? Showbusiness is a business after all and nothing is ever new in Hollywood. So for the past few years, Disney has been working on creating live-action versions of their classics, with Beauty and the Beast being  the latest installment. However, what sounded like a horrible business decision, somehow has turned out some great movies like Jungle Book and Cinderella. Did lightning strike again?

Well… yes. Having seen the original and all of its special features on the Blu-ray yesterday evening, I was prepared to be disappointed. Never have I been more glad that I was proven wrong.

One of the reasons director Bill Condon was interested in doing a remake, despite considering the original “a perfect movie” is the evolution of CGI. “It is 25 years later and technology has caught up to the ideas that were introduced in the animated movie,” he explains. “Now it is possible, for the first time, to create a photo-real version of a talking teacup on a practical set in a completely realistic live action format.”

To create a full-fledged live-action rendition of an animation film, additional depth is sometimes required. This can go from small things like suddenly naming the small village as Villeneuve to adding completely new characters like Stanley Tucci’s Maestro Cadenza, a harpsichord. But the biggest change is the introduction and backstories of characters.

One of those backstories is having Belle’s mother die of the Plague, in what feels like a sad parallel to songwriter Howard Ashman who died of AIDS during the production of the original movie.

On the  movie’s Blu-ray is the original 20 minute story-reel for the animated movie. It’s great to see Disney going back to their archives, and reuse all those ideas in a way that not only makes sense, but also truly enhances the movie. Some parts have been integrated from the original fairy tale as well.

The original cast of mostly Broadway-legends have been updated to A-list actors. However, the casting was spot-on.

Emma Watson has been shedding her Harry Potter history without losing her lovelyness and great talent, which makes her an almost obvious choice for the smart and independent Belle. In fact, Belle is more active than ever. Luke Evan’s Gaston on the other hand is even more of an evil bastard than he was before. The character that became gained not only a dimension in art, but also in personality is Josh Gad’s LeFou. And I don’t only mean that ‘one thing’.

Ewan McGregor and Ian McKellen have great chemistry together as well, making them great as Lumière and Cogsworth.

Hearing that classic music and song accompany the visuals just ads so much dimension to this movie. Something that I felt was lacking with movies like Cinderella and in some part The Jungle Book. Everyone in the cast has solid singing performances. It especially was great to hear Ewan McGregor bring out his Moulin Rouge singing voice again.

Something that you do feel isn’t there are the new songs, where we miss Howard Ashman deeply. Having Tim Rice come in with veteran Alan Menken does add a lot, but the new songs Days in the Sun and Forever More feel a tad odd. However, with some time and repeated listening, my opinion might change. That’s the sad thing about advance press screenings. You can’t line up again and see and hear things a second time to give it the full impression.

Interestingly enough, Forever More was created as a song for Beast, with the Broadway musical song If I Can’t Love Her reportedly not fitting in with the film’s events

One dubious honour that the animated classic has, is that it’s the first ever Disney movie to create a pop-version of their main song. No matter how popular she became, in my opinion, Celine Dion’s duet with Peabo Bryson is no match for Angela Lansbury’s iconic movie version. Same here, as Ariana Grande and John Legend’s single Beauty and the Beast doesn’t again come close to Emma Thompson’s Mrs. Potts.

The biggest problem is the same as with every remake. You know exactly what is going to happen, and how it is going to end. Something that even the trailers did not try to hide. But then again, we all know the Titanic is going to sink. That doesn’t mean retelling the tale will be any less exciting.

However if it’s not Baroque, don’t fix it.

So did this movie had to be made? No. But I’m glad they did, as it’s truly a tale as old as time.

Disney’s animated Beauty and the Beast debut in 1991 and became an instant classic. It was and still is a cinematic animated masterpiece. But could it be better? Twenty five years later, that’s what director Bill Condon (Dreamgirls) hopes to achieve in adapting the animated fairy tale into a live action musical. The announcement was met with both cheers and jeers, as many were excited to see Disney magic in live action, while others, including myself, were wondering “why mess with perfection?” Disney has had quite a history of adapting their animated classics into live action over the years with 101 Dalmatians, Maleficent, Cinderella, and the most recent The Jungle Book. Following Beauty and the Beast will be a live action adaption of Mulan, Aladdin, The Little Mermaid and The Lion King. Is nothing sacred? Fortunately for fans of Disney and big budget musicals, Beauty and the Beast soars quite elegantly for the most part with a only a few snags.

The tale as old as time has the rare blessing of having Alan Menken back as the composer and song-writer once again, following the animated feature and the broadway musical. If there’s anyone to deliver the music, there is no one better than Alan. All the usual favorites from the animated film are back again and expanded in some cases, plus the addition of a few new songs written for the film: “How Does a Moment Last Forever” sung by Kevin Kline (Maurice) and later by Emma Watson (Belle), “Days in the Sun” sung by the cast, and “Evermore” sung by Dan Stevens (Beast). All the new songs and moments may take some getting used to but they’re remarkable tunes on their own and in time, should become as memorable as the original tracks.

Watching a film with a story so familiar and yet so different is a peculiar experience. You know what’s coming and yet when things are changed or expanded, it throws you for a loop. Most distracting would be voices you’re not used to singing certain songs or dialogue that is almost the same yet not. But where the film does excel is taking the original story and giving it more depth and story where it was initially ignored or left out. The romance between Belle and the Beast is certainly more convincing in this adaptation, giving both characters more back story and a place of understanding, rather than simply falling in love after enough time passes. We also explore more of Maurice’s past, which sounds unnecessary at first, but becomes a very emotional story point later on.

All said and done, any one who doubted this picture should rest assured that this is like the animated feature yet different. Both can co-exist and both can be cherished. Both will bring a tear to your eye if you’re open to it. This new Beauty and the Beast isn’t perfect, but it’s certainly close. If anything at all, see it for Ian McKellen’s turn as Cogsworth. He is an absolute joy.

Kris Van de Sande
As an international commercial photographer with a passion for themed entertainment, Kris encounters and captures many sides of the entertainment industry. Passionated by Star Tours, he founded EndorExpress in 2002.
Read more from Kris Van de Sande
Tags: Alan Menken, Beauty and the Beast
Loading Comments...