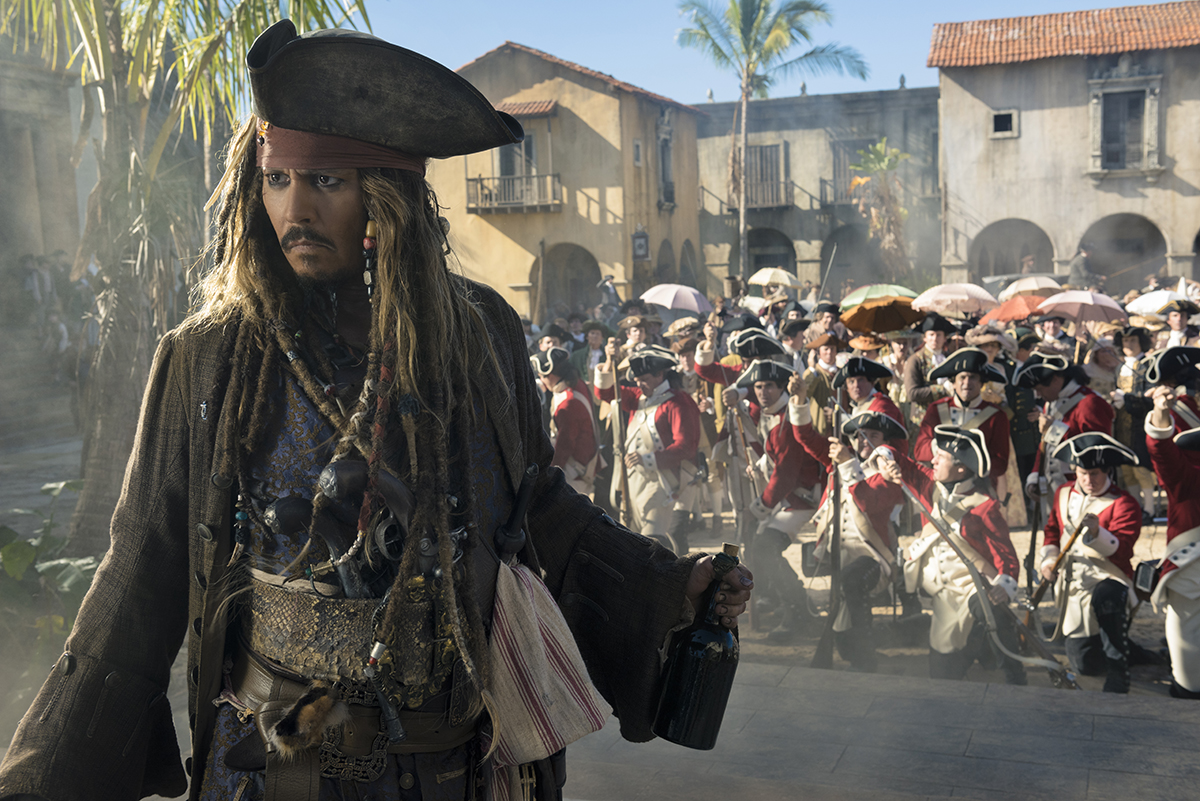 I’ve always been fond of The Pirates of The Caribbean series from the moment Captain Jack Sparrow stood on the mast of his sinking ship, making harbour in Port Royal. Swashbuckling pirates, drunk on rum having supernatural adventures in the tropical ocean, filled with references to one of my all-time-favourite Disneyland attractions. What’s not to love? And beyond that, it was a really great film!

Apart from the States and a few other countries, Dead Men Tell No Tales is called Salazar’s Revenge, which is the silliest title ever compared to the other name, cutting away the only Disneyland reference I could spot in the movie. – We wants the redhead, amiright?

Taking place fourteen years after the end of At World’s End, it mostly ignores whatever happened in On Stranger Tides, arguably the weakest of the series. We meet Elisabeth and Will’s son Henry, teased at the end-credit scene of At World’s End, on a quest. On his way, he encounters Carina Smyth, who also is on a quest. Joining forces, they encounter Captain Jack Sparrow, who of course, is also on a quest. Conveniently, they are chasing the same MacGuffin, all for their own reasons. Which is basically the second part of Dead Man’s Chest.

Though, despite these convenient story-shortcuts, the movies is more of a search for identity rather than treasure. In fact, you can replace the Trident of Poseidon with basically any other magical device, and the story would still work. But the new characters have heart, and rightfully own their place in the franchise. If I have one gripe, it’s getting Captain Barbossa back to further the plot of other characters, rather than his own real arc. Something that also plagued the second Guardians of the Galaxy movie. Though I must admit, Geoffrey Rush has some delicious moments to put his teeth in.

I’d also love to talk about Javier Bardem and his performance as Captain Salazar for a minute. Despite having a major film career, it seems like it was Skyfall that propelled Bardem to a leading antagonist. As the bad guy, Salazar might be up there with Davy Jones leaving Ian McShane’s Blackbeard as a mere afterthought. Having his own personal reasons to hate Jack Sparrow, Salazar is a truly threatening villain, despite not having any real reason to hate pirates, except that he does.

As the shortest film in the franchise, it doesn’t have any lagging moments, but it also means that sometimes a bit of exposition is lost in the speed of the movie, meaning you just have to accept why some characters are there, who they are, and why they are there. To make up for that, the movie comes with a lot of epic set pieces. Though you feel there is another director behind the camera. In fact, I do kinda miss Gore Verbinski’s iconic style of practical shooting instead of the big massive sweeping drone shots new directors Joachim Rønning and Espen Sandberg seem to be fond of.

Despite some jumping the shark moments, there are truly some butt clenching moments on the edge of your suspension of disbelief, but I think the movie pulls it off.

After a solid start, the franchise definitely took some weirder turns, perhaps by the pressure to always up the scale and make it even bigger and bolder. Something that perhaps is not needed. I’d love a great pirates film without anything supernatural. Just daring adventures. But just like Indiana Jones, the supernatural has been woven into the DNA of the series. Let’s just hope there won’t be aliens .. or at least inter-dimensional beings in the next one.

Who has been the real creator of the Pirates music always is a debate, but we can all agree it’s all talent from Hans Zimmer’s studios that has stepped forward. For this movie, credit goes to Geoff Zanelli, incorporating music we heard before, with some lovely new music written. However, it’s the ending of the movie, with some really familiar music and visuals that tug the heartstrings, and make you feel nostalgic and even perhaps emotional.

Pirates of the Caribbean: Dead Men Tell No Tales has some flaws, but I’m glad that there is a Pirates movie back in theatres that we can enjoy.

And again, stay for an excellent post-movie credit.

Kris Van de Sande
As an international commercial photographer with a passion for themed entertainment, Kris encounters and captures many sides of the entertainment industry. Passionated by Star Tours, he founded EndorExpress in 2002.
Read more from Kris Van de Sande
Tags: Pirates of the Caribbean
Loading Comments...