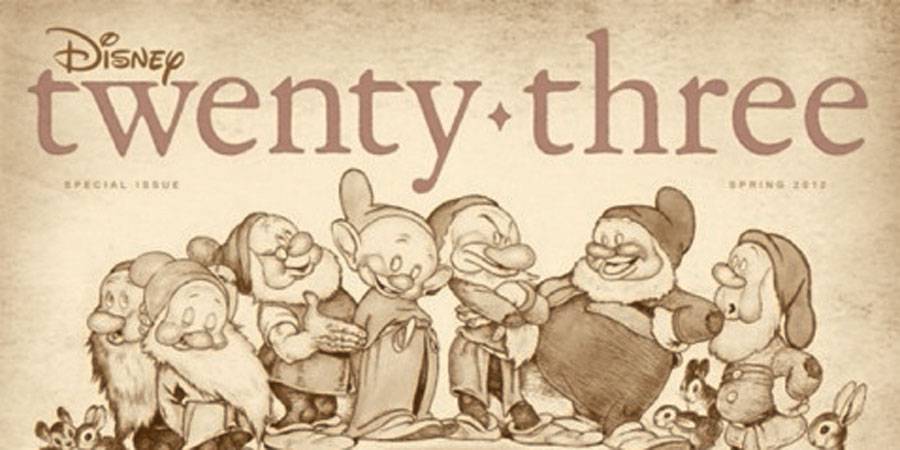 D23 has sent us highlights of the spring 2012 issue of Disney Twenty-Three Magazine and details of new additions to the growing list of discounts offered to D23 Members.

BURBANK, Calif. – January 26, 2012 – D23 devotes its entire Spring issue of Disney twenty-three magazine to the remarkable legacy and influence of Disney animated films. From Snow White and the Seven Dwarfs to the animated classics of tomorrow, the official Disney fan club takes readers on a fantastic journey from the drawing board to the silver screen.

Available nationwide on February 14, this special issue of Disney twenty-three magazine is an extraordinary treasure trove of fascinating stories, insights and details of Disney animation’s heritage. From pre-production to music composition, every facet of making classic Disney animated features is explored—including the transcriptions from Walt’s story meetings with his animation team as they developed such classics as Fantasia, Pinocchio and Cinderella.

“It’s often been said that animation is the heart and soul of Disney, so we knew we needed to do something truly spectacular with our magazine in this milestone year,” said Steven Clark, head of D23. “Whether you’re interested in the first Golden Age of Disney animation or you’re looking forward to the next beloved classic, there’s something in this issue for every Disney fan.”

Fittingly, the magazine’s first story examines the legacy of Walt Disney himself and the vision he set forth even before Snow White and the Seven Dwarfs hit the screen. FiIm historian and Academy-Award® winner John Canemaker looks at how Disney animated films have continuously raised the bar for three quarters of a century, since audiences were first enchanted by the “fairest of them all.”  Also included in the Spring issue are:

There’s even more to discover—including spectacular photography and artwork—in the Spring issue of Disney twenty-three, which will be delivered directly to all Gold-level D23 Members beginning in early February with the limited-edition Snow White reproduction cel as their collectible gift.

Disney twenty-three magazine is available at retail locations across the country for $15.95, and can also be purchased online at DisneyStore.com and throughout the Disneyland® and Walt Disney World® Resorts. Gold-level members of D23: The Official Disney Fan Club are treated to each issue delivered directly to their mailbox, accompanied by a special collectible gift.

D23: The Official Disney Fan Club celebrates the remarkable past, present and future of Disney, taking its name from 1923, the year Walt Disney founded his world-famous company. D23 brings its members a host of exclusive benefits, including a bi-weekly e-mail newsletter; an array of discounts and special offers; free gifts throughout the year; and exclusive, member-only special events.

Disney fans can join the world’s only Official Disney Fan Club by visiting www.Disney.com/D23, or at select shops at the Disneyland® Resort, the Walt Disney World® Resort and www.DisneyStore.com/D23.

From Disney Artwork to Hotel Rooms, Movie Tickets to Science Centers, Dining and More, Members Have More Than Two Dozen Ways to Save

BURBANK, Calif. – January 24, 2012 – From Broadway to Hollywood, from the Big Easy to the Aloha State, D23: The Official Disney Fan Club has added a bevy of new benefits and special discounts to bring new ways for its members to save when shopping, traveling, dining, entertaining… even decorating their homes.

From Disney collectibles to accommodations near the Disneyland Resort, D23’s most recently added special discounts include:

In addition to these special discounts, Disney Vacation Club® — Disney’s innovative approach to vacation ownership since 1991 — is celebrating the opening of Aulani, Disney Vacation Club Villas in Ko Olina, Hawai‘i, with a special limited-time offer.  Starting February 1, 2012, D23 Members have an exclusive opportunity to receive a vintage work of custom-matted art from Walt Disney’s 1937 animated short “Hawaiian Holiday” by simply learning more about the magic of Disney Vacation Club membership by phone.*

The newest D23 Member discounts and offers are in addition to ongoing special deals, a full list of which can be found online at http://d23.disney.go.com/special-offers-and-discounts-by-experience/. Continuing D23 Member offers also include:

This is just a sample of available the D23 Member discounts and offers–with more coming throughout 2012, saving members literally hundreds of dollars a year.

All new and renewing D23 Members, including Silver D23 Members ($34.99 a year), also receive a member-exclusive gift from the Walt Disney Archives Collection, and specially priced admission to the bi-annual D23 Expo, the largest Disney fan event in the world.

* THIS PROMOTIONAL MATERIAL IS BEING USED FOR THE PURPOSE OF SOLICITING SALES OF TIMESHARE INTERESTS. Exclusive merchandise – no retail value. DVC-GIFT-31-A.

Brian Curran
A Star Wars Fan since 1977 when he was just 2. Brian grew up in California where his family would often make trips to Disneyland. In 1987 he took his first “Trip to Endor” and doesn’t pass on a chance to go back! He also enjoys going to Conventions and meeting the actors from the Star Wars films.
Read more from Brian Curran
Tags: Wreck-It Ralph, Snow White and the Seven Dwarfs, Fantasia, Pinocchio, Cinderella, Thomas Kinkade, House of Blues, El Capitan Theatre, Press Release, D23 Magazine
Loading Comments...