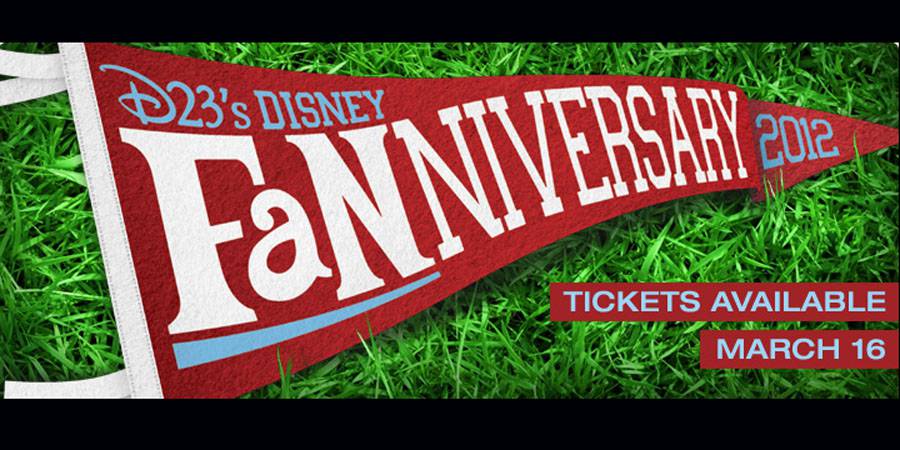 A KALEIDOSCOPE OF MAGICAL MEMORIES TRAVELS
TO SIX CITIES AROUND THE U.S. THIS SPRING IN
D23’S DISNEY FANNIVERSARY CELEBRATION

BURBANK, Calif. – March 1, 2012 – From EPCOT Center to Oswald the Lucky Rabbit, from Pirates of the Caribbean to Pete’s Dragon, more than 40 unforgettable Disney creations come together as never before when D23: The Official Disney Fan Club brings D23’s DISNEY FANNIVERSARY CELEBRATION to six cities across the U.S. in April, May and June.

FANNIVERSARY is a fun-filled showcase of magical milestones celebrating Disney anniversaries in 2012.  Produced and hosted by D23 and the Walt Disney Archives, the nearly two-hour show is an engaging blend of video, archival footage and never-before-seen artwork for Disney fans of all ages.

The kick-off of the FANNIVERSARY celebration will be at the Walt Disney Studios in Burbank, California, on April 27, then travel to San Francisco, Boston, New York City, Orlando and Chicago.

The touring schedule is as follows:

“Fanniversary is a incredible opportunity to celebrate more than 40 beloved Disney anniversaries with our fans across the country. From the fairest of them all—Snow White—to Star Tours, which continues to take guests to a galaxy far, far away,” said Steven Clark, head of D23: The Official Disney Fan Club.

More details about the full program for the D23 FANNIVERSARY celebrations can be found online at www.disney.com/D23.

D23: The Official Disney Fan Club celebrates the remarkable past, present and future of Disney, taking its name from 1923, the year Walt Disney founded his world-famous company. D23 brings its members a host of exclusive benefits, including a bi-weekly email newsletter; an array of discounts and special offers; free gifts throughout the year; as well as exclusive events created especially for its members.

Disney fans can join the world’s only Official Disney Fan Club by visiting www.Disney.com/D23, or at select shops at the Disneyland® Resort, the Walt Disney World® Resort and www.DisneyStore.com/D23. To keep up with all the latest D23 news and events, follow “DisneyD23” on Twitter, YouTube and Facebook.

Brian Curran
A Star Wars Fan since 1977 when he was just 2. Brian grew up in California where his family would often make trips to Disneyland. In 1987 he took his first “Trip to Endor” and doesn’t pass on a chance to go back! He also enjoys going to Conventions and meeting the actors from the Star Wars films.
Read more from Brian Curran
Tags: Walt Disney Family Museum, Fanniversary, Fantasmic!, D23 Expo, Star Tours, Tron, Pirates of the Caribbean, Press Release
Loading Comments...