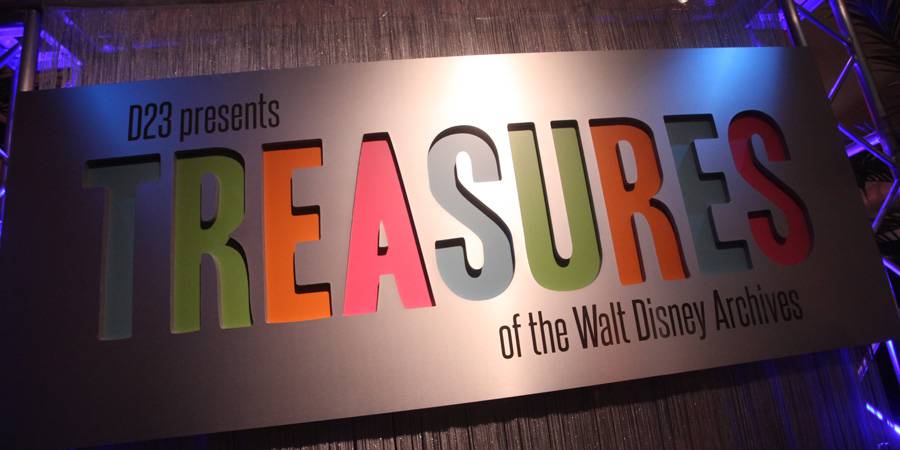 Fans of all things Disney can rejoice as D23: The Official Disney Fan Club and the Walt Disney Archives join forces with the Ronald Reagan Presidential Library and Museum to assemble hundreds of items never before displayed to the public.  The exhibit located in Southern California opens today, July 6th and will remain open during regular museum operating hours.

EndorExpress has already given you a sneak peak at some Star Tours and Tron items found in the exhibit, but here today we will showcase some items from Walt’s earlier days before his first feature.  Stick around as we will post several more photos throughout the coming week!

Presented by D23: The Official Disney Fan Club and The Ronald Reagan Presidential Foundation and Library, D23 PRESENTS TREASURES OF THE WALT DISNEY ARCHIVES is the largest exhibition ever curated by the Walt Disney Archives, at 12,000 square feet. From Oswald the Lucky Rabbit and Mickey Mouse to Captain Jack Sparrow and Captain America, the exhibition features more than 500 artifacts, at least half of which have never been seen by the public— including models, props, costumes, set pieces, and artwork from throughout Disney history.

“Ronald Reagan and Walt Disney were longtime friends, two optimists who shared an unwavering belief in the essential goodness of the American way of life,” said Bob Iger, chairman and CEO, The Walt Disney Company. “We’re proud to partner with the Reagan Library and the National Archives to showcase Disney’s rich entertainment legacy. This extraordinary exhibit will offer visitors an unprecedented look into Disney’s history and celebrate the connection between these two American originals.”

Among the extraordinary items to be featured are:

The exhibition also pays tribute to the long personal friendship and professional collaboration between Walt Disney and Ronald Reagan, which began many years before President Reagan’s political career.

On July 17, 1955, Ronald Reagan was one of the co-hosts of ABC Network’s live coverage of the opening of Disneyland, and as governor of California, he frequently visited Disney’s first theme park. After leaving the Oval Office, one of his first public events was a return to Disneyland, where he officiated at the park’s January 1990 35th-anniversary celebration, proclaiming it “one of America’s national treasures.”

“Walt Disney and Ronald Reagan shared a passion for America, a belief in the human spirit, and an innate optimism that, in both men, galvanized the public,” said John Heubusch, executive director of the Ronald Reagan Presidential Foundation. “President Reagan was a great admirer of Walt Disney, and we are tremendously proud to host this wonderful exhibition of Disney treasures, and to honor the bond between Walt and President Reagan.”

For exhibit hours and additional information, visit the Ronald Reagan Presidential Library & Museum online at www.reaganlibrary.com, or www.Disney.com/D23. Admission to the exhibition is included with the purchase of admission to the Ronald Reagan Presidential Library & Museum.  Through April 2013, when the exhibition is scheduled to end, members of D23: The Official Disney Fan Club also save $2 on every adult admission.

“At 12,000 square feet, this is the largest special exhibit the Reagan Library has ever put on,” said Duke Blackwood, director of the Ronald Reagan Presidential Library. “It is a testament to the relationship between Walt Disney and our nation’s presidents, as well as the story of Disney, itself. The Reagan Library and National Archives are honored to host this extraordinary exhibit.”

The Ronald Reagan Library & Museum is located in Simi Valley, Calif., about 60 minutes north of downtown Los Angeles and approximately two hours north of the Disneyland Resort in Anaheim.

D23: The Official Disney Fan Club celebrates the remarkable past, present, and future of Disney, taking its name from 1923, the year Walt Disney founded his world-famous company. D23 unlocks the magic of Disney with a host of exclusive benefits, including a quarterly publication, Disney twenty-three, a rich website at www.disney.com/D23, a weekly e-mail newsletter; an array of discounts and special offers; free gifts throughout the year; as well as exclusive events created especially for its members.

Disney fans can join the world’s only Official Disney Fan Club by visiting www.Disney.com/D23, or at select shops at the Disneyland Resort, the Walt Disney World Resort and www.DisneyStore.com/D23. To keep up with all the latest D23 news and events, follow “DisneyD23” on Twitter, YouTube and Facebook.

About The Ronald Reagan Presidential Foundation and Library

The Ronald Reagan Presidential Foundation is a non-profit, non-partisan organization dedicated to the preservation and promotion of Ronald Reagan’s legacy of individual liberty, economic opportunity, global democracy, and national pride. It sustains the Ronald Reagan Presidential Library and Museum, the Center for Public Affairs, the Presidential Learning Center and The Air Force One Pavilion. Located in Simi Valley, Calif., the Library houses over 55 million pages of Gubernatorial, Presidential and personal papers and more than 60,000 gifts and artifacts chronicling the lives of Ronald and Nancy Reagan. It now also serves as the final resting place of America’s 40th President. www.reaganfoundation.org, www.reaganlibrary.com.

David Yeh
A long time fan of both Disney and Star Wars, he has a hard time resisting the temptations of Disney’s merchandising force. If you see pictures of the toys and pins, you can bet they are from Dave, our resident collecting guru.
Read more from David Yeh
Tags: Ronald Reagan, Star Tours, Tron, Pirates of the Caribbean, Treasures of the Walt Disney Archives
Loading Comments...