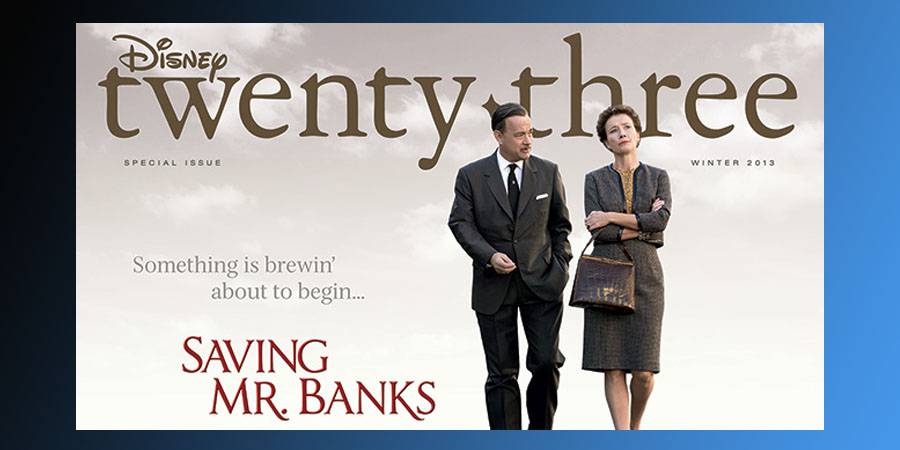 Plus, D23.com online exclusives include video of the 1964 Mary Poppins premiere, galleries of the film’s matte paintings, and an interactive map of the Walt Disney Studios featuring locations used in Saving Mr. Banks.“

BURBANK, Calif. – November 4, 2013 – To celebrate the release of Saving Mr. Banks and the upcoming 50th anniversary of Mary Poppins, D23: The Official Disney Fan Club has dedicated the entire winter issue of its flagship magazine, Disney twenty-three, to our beloved nanny. The publication, available exclusively to Gold Members of D23, includes exclusive interviews with Saving Mr. Banks stars Tom Hanks, Emma Thompson, and Bradley Whitford, as well as director John Lee Hancock. It takes readers behind the scenes of the making of this spectacular new film, which opens this Christmas and looks at the creation of Disney’s Mary Poppinsand the sometimes combative but respectful relationship between the character’s creator, P.L. Travers (Thompson), and Walt Disney (Hanks).

Disney twenty-three’s Winter issue also offers a look inside the fascinating life of P.L. Travers, with a personal reminiscence by her friend, author Brian Sibley, whom she once told, “I don’t feel for a moment that I invented her. I feel visited by her.” And original film composer Richard M. Sherman, visual consultant Tony Walton, and choreographers Marc Beaux and Dee Dee Wood offer exclusive insight into the creation of the 1964 Disney classic, which will officially celebrate its 50th anniversary next August.

Also included in the Winter issue of Disney twenty-three:

·         An in-depth look at the film’s groundbreaking special effects

All D23 Members are invited to visit www.D23.com, where the fan club is kicking off its year-long celebration of Mary Poppins’ 50th anniversary with a unique video reconstruction of the Mary Poppinsworld premiere, containing five minutes of never-before-released material. Although the original telecast of the event appears to have been lost forever, this 22-minute segment includes audio from the premiere’s two separate interview locations, combined with all the surviving color film and black-and-white newsreel footage—re-creating the excitement and glamour of this stellar premiere at Grauman’s Chinese Theatre on August 27, 1964.

Other features planned for D23.com’s online celebration include:

·         Extensive Mary Poppins galleries, including a look at the film’s breathtaking matte paintings.

·         An interactive map of the Walt Disney Studios with photo locations from Saving Mr. Banks

·         Rarely heard audio files from the making of Mary Poppins

·         A look at the sodium screen/traveling matte process, which gave the film its unique visual look

Also in the Winter issue, D23 Gold Members will receive a reproduction of the ticket mailed to invitees for the Mary Poppins premiere at Grauman’s Chinese Theatre.

The name “D23” pays homage to the exciting journey that began in 1923 when Walt Disney opened his fledgling studio in Hollywood. D23 is the first official club for fans in Disney’s nearly 90-year history. D23 gives its members a greater connection to the entire world of Disney by placing them in the middle of the magic through its quarterly publicationDisney twenty-three; a rich website at D23.com with members-only content; member-exclusive discounts and special events for D23 Members throughout the year.

Brian Curran
A Star Wars Fan since 1977 when he was just 2. Brian grew up in California where his family would often make trips to Disneyland. In 1987 he took his first “Trip to Endor” and doesn’t pass on a chance to go back! He also enjoys going to Conventions and meeting the actors from the Star Wars films.
Read more from Brian Curran
Tags: Saving Mr. Banks, Richard Sherman, Mary Poppins, Tom Hanks
Loading Comments...