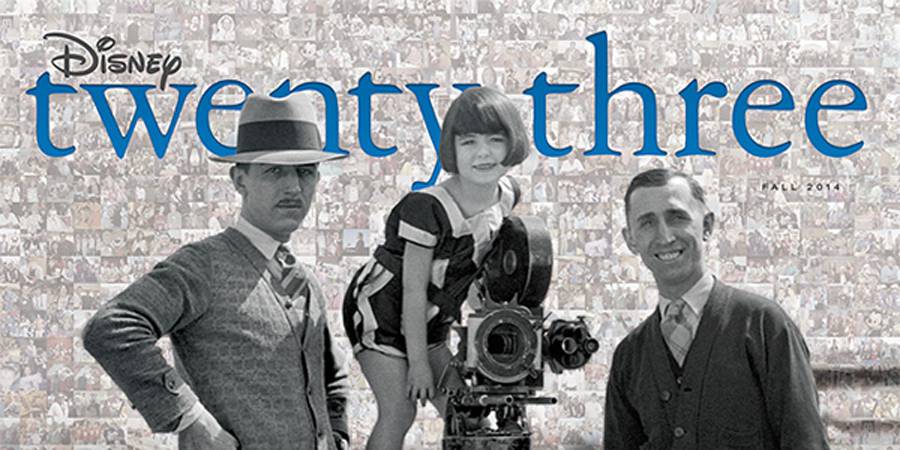 Readers will journey to France to experience Ratatouille: The Adventure, Japan for a special Treasures of the Walt Disney Archives Exhibition, and San Fransokyo to explore the new universe of Big Hero 6.

D23.com sits down for exclusive interviews with Marvel icon Stan Lee and the creators of Once Upon a Time.

BURBANK, Calif. – JULY 29, 2014 – To celebrate 23 issues of its collectible publication, Disney twenty-three, D23: The Official Disney Fan Club circles the planet to experience Disney’s worlds from Europe, South America, and Asia to the fantastical fictional realms of San Fransokyo and Once Upon a Time’s Enchanted Forest. The cover of the issue features a spectacular photo mosaic with a classic image of Walt and Roy O. Disney with Margie Gay of the Alice Comedies shorts series, courtesy of images of D23 Members from around the globe.

Disney twenty-three’s Fall issue, available exclusively to Gold Members of D23, starts the journey with a visit to France for an in-depth look at how the creative team at Walt Disney Imagineering brought the spectacular world of Ratatouille to life at Disneyland Paris for Ratatouille: The Adventure. Then it’s off to Japan where Treasures of the Walt Disney Archives is touring the country with a dazzling exhibit featuring more than 70 props, costumes, images, and artifacts. In “It’s A Disney World After All,” D23 goes on a non-stop tour from Latin America to the Middle East to look at Disney’s indelible mark on the rich cultures of many nations. And, in true Disney fashion, we visit the stunning and sleek fictional city of San Fransokyo for a look at spectacular concept art that inspired the upcoming Walt Disney Feature Animation release Big Hero 6.

Also included in the Fall issue of Disney twenty-three:

All D23 Members are invited to visit www.D23.com for additional members-only content, including an in-depth video interview with Stan Lee who sits down to talk about Marvel’s 75-year legacy.

Disney twenty-three, which is delivered directly to fans’ doorsteps, is offered exclusively to D23 Gold Members as a benefit of their membership. The publication will begin arriving mid-August.

Brian Curran
A Star Wars Fan since 1977 when he was just 2. Brian grew up in California where his family would often make trips to Disneyland. In 1987 he took his first “Trip to Endor” and doesn’t pass on a chance to go back! He also enjoys going to Conventions and meeting the actors from the Star Wars films.
Read more from Brian Curran
Tags: Michael Giacchino, D23 Magazine, Marvel’s Agents of S.H.I.E.L.D.
Loading Comments...