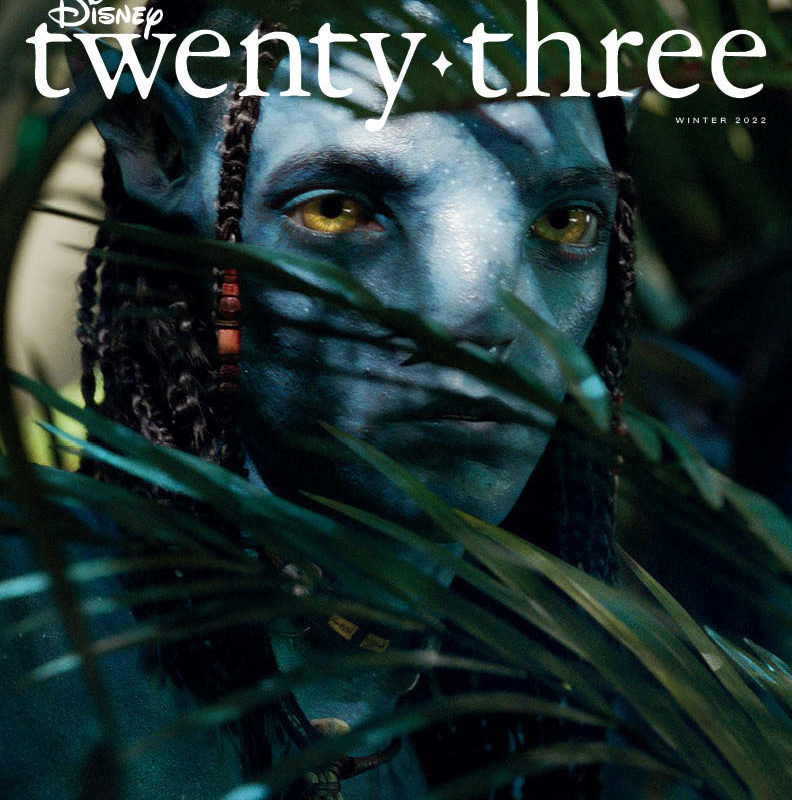 ©Disney
Winter 2022 issue of Disney twenty-three
DISNEY TWENTY-THREE Journeys to Pandora, Going behind the scenes of the nest-level storytelling of AVATAR: THE WAY OF WATER.
By Brian Curran

DISNEY TWENTY-THREE Journeys to Pandora, Going behind the scenes of the nest-level storytelling of AVATAR: THE WAY OF WATER.

GET THE INSIDE SCOOP WITH THE STARS AND CREATORS OF UPCOMING DISNEY+ FILMS AND SERIES INCLUDING DISENCHANTED, WILLOW, THE SANTA CLAUSES, AND NATIONAL TREASURE: EDGE OF HISTORY

BURBANK, Calif. – November 3, 2022 – In 2009, James Cameron’s Avatar transported audiences to a completely new world, exploring a dazzling landscape of colorful characters and unique species, while touching the hearts of millions. The Winter issue of Disney twenty-three takes readers back to Pandora for a new set of adventures that await fans in Cameron’s Avatar: The Way of Water. The much-anticipated sequel to the highest-grossing movie of all time opens in theaters December 16, and Disney twenty-three goes behind the scenes on the next chapter in this groundbreaking story with stars Sam Worthington (Jake), Zoe Saldaña (Neytiri), and Sigourney Weaver (Kiri), as well as producer Jon Landau. “At its core, Avatar: The Way of Water is about family, about survival, about our Na’vi and human family, and about the greater family with our fellow creatures and our flora and fauna,” says Weaver.

D23 Expo 2022 gave fans a first look at Disney 100 Years of Wonder. The new issue explores some of the highlights of the celebration, including new theme park spectaculars, incredible films, and an immersive touring exhibition from the Walt Disney Archives.

Ever since Giselle (Amy Adams) and Robert (Patrick Dempsey) got their “happily ever after” in 2007’s Enchanted, fans have been dreaming about what happens next. On November 18, Disney+ is granting that wish with the new film Disenchanted. Stars Maya Rudolph, Gabriella Baldacchino, James Marsden, and Disney Legend Idina Menzel, along with director Adam Shankman, reveal the true meaning of “happily ever after” and what’s in store for this fairytale family after Giselle and Robert share true love’s kiss. Plus, Warwick Davis talks about bringing back his iconic character Willow Ufgood, who is tasked once more with saving the world in Lucasfilm’s Willow, an Original series coming November 30 to Disney+.

Disney Legend Tim Allen revisits key moments from his acting career, including what it was like to reprise his classic role as the “man in the red suit” in the upcoming Disney+ Original series, The Santa Clauses, recounting favorite memories from sleigh bells and toolbelts to infinity and beyond. And stars of the upcoming Disney+ Original series National Treasure: Edge of History share their own book of secrets about what’s in store for this next generation of treasure hunters.

The new issue, available exclusively to Gold Members of D23: The Official Disney Fan Club, also takes a boat ride down memory lane with Disney Park historians to commemorate 25 years of “it’s a small world” Holiday. As a special bonus, each issue of the publication, available exclusively to D23 Gold Members, will include a set of holiday-themed gift tags as part of D23 Season of Magic presented by Target.

Also in the Winter 2022 issue of Disney twenty-three:

Disney twenty-three is delivered directly to fans’ doorsteps and is offered exclusively to D23 Gold Members as a benefit of their membership. The latest issue will begin arriving before the end of November.

About D23
The name “D23” pays homage to the exciting journey that began in 1923 when Walt Disney opened his first studio in Hollywood. D23 is the first official club for fans in Disney’s nearly 100-year history. It gives its members a greater connection to the entire world of Disney by placing them in the middle of the magic year-round through its quarterly publication, Disney twenty-three; the latest news and stories on D23.com; member-exclusive offers and discounts; the popular D23 Inside Disney podcast; and special experiences for D23 Members throughout the year.

Brian Curran
A Star Wars Fan since 1977 when he was just 2. Brian grew up in California where his family would often make trips to Disneyland. In 1987 he took his first “Trip to Endor” and doesn’t pass on a chance to go back! He also enjoys going to Conventions and meeting the actors from the Star Wars films.
Read more from Brian Curran
Tags: Lucasfilm, Press Release, D23 Magazine, Willow, D23, Avatar
Loading Comments...