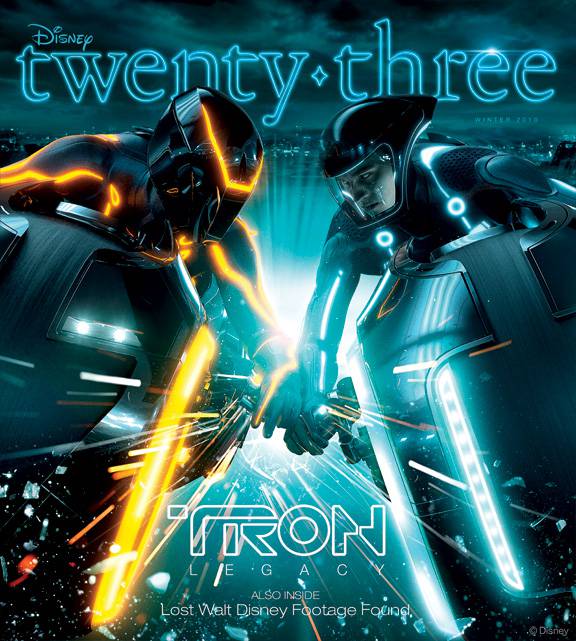 WINTER ISSUE OF DISNEY TWENTY-THREE
GETS INSIDE THE GAME GRID FOR AN EXCLUSIVE SNEAK PEEK AT TRON: LEGACY

BURBANK, Calif. – October 22, 2010 – Readers will have an exclusive all access sneak peek at the upcoming Disney feature film TRON: Legacy (in theatres December 17, 2010) when Disney twenty-three’s Winter issue debuts November 1. Featuring one of the first comprehensive filmmaker interviews for TRON: Legacy, the Winter issue of Disney twenty-three magazine, produced by D23: The Official Disney Fan Club, is loaded with stories to delight Disney fans and the general public alike.

This issue of Disney twenty-three offers in-depth discussions with TRON: Legacy filmmakers and features two highly collectible covers. One cover is sent exclusively to D23 Members and the other is available for purchase at select Barnes & Noble and Borders bookstore locations, online at DisneyStore.com and throughout the Disneyland® and Walt Disney World® Resorts.

Director Joseph Kosinski and Producer Sean Bailey offer commentary on everything from behind-the-scenes moments and the personal memories that inspired participation in this cult-classic-sequel to the technical details that breathed life into the project. Writer Steven Lisberger even addresses the nearly thirty year gap between this film and the original release, saying: “The reason it took the 25 to 28 years is because we needed the ten-year-olds to grow up and be powerful enough to make this movie so that they could take their ten-year-old sons to see it.”

TRON: Legacy co-stars are also interviewed in the nine-page spread. Bruce Boxleitner reprises his role from the original 1982 film, admitting that he is “the biggest TRON fan there is,” while newcomer Garrett Hedlund discusses his take on his role as the character that inherits the TRON legacy.

Packed with gorgeous photos, extensive content and splendid artwork, the Winter issue of Disney twenty-three also gives readers an incredible opportunity to explore the architecture of the new Aulani Resort & Spa, Disney’s first resort in Hawaii , appropriately planted in the midst of a culture alive with history and a rich storytelling tradition.

Disney twenty-three also looks back at classic Disney with two very special pieces. The first displays the Holiday Season through the eyes of Walt and his family. A perfect fit for the Winter issue, the piece gives fans the privilege of an intimate look at Walt’s home life. The second is the result of newly-discovered footage that chronicles Walt’s last time in front of the camera in the Studio’s legendary Stage 1.

There’s much more in the Winter issue of Disney twenty-three, including:

And there’s even more for Disney fans to explore in the Winter issue of Disney twenty-three magazine.  As with every issue of Disney twenty-three, D23 Members receive an added bonus. This issue, which features a specially designed collectible cover, also comes with an exclusive TRON: Legacy gift that will be shipped to members. To become a D23 Member, visit www.disney.com/D23.

Beginning November 1, Disney twenty-three is available at select retail locations for the suggested retail price of $15.95.

The name “D23” pays homage to the wonder and excitement that began in 1923 when Walt Disney opened his fledgling studio in Hollywood .  D23 is the first official community for fans in Disney’s 85-year history.  D23 gives its members a greater connection to the entire world of Disney by placing them in the middle of the magic through its quarterly publication Disney twenty-three; a rich website at www.disney.com/D23; a collectibles line, The Walt Disney Archives Collection; and special events for D23 members throughout the year. Fans can join D23 at www.Disney.com/D23, select shops at Disneyland® Resort and Walt Disney World® Resort, and www.DisneyStore.com.

Brian Curran
A Star Wars Fan since 1977 when he was just 2. Brian grew up in California where his family would often make trips to Disneyland. In 1987 he took his first “Trip to Endor” and doesn’t pass on a chance to go back! He also enjoys going to Conventions and meeting the actors from the Star Wars films.
Read more from Brian Curran
Tags: Dave Smith, Bruce Boxleitner, George Lucas, D23 Expo, Tron Legacy
Loading Comments...