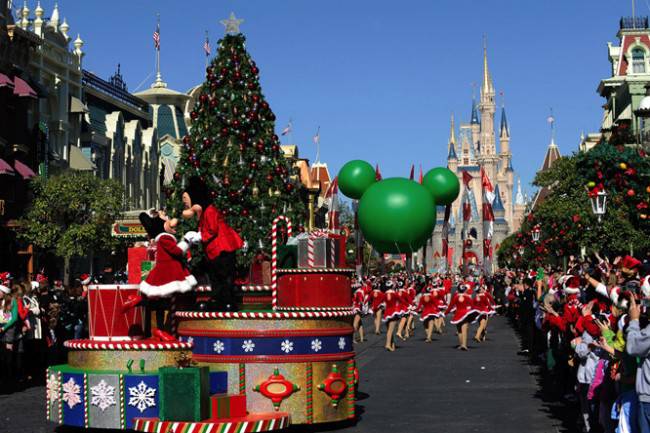 Be sure to check your local listings for The Disney Parks Christmas Day Parade.

” Even the dark side can’t resist the spirit of the season as Darth Vader and his legion of Stormtroopers from the Star Wars film saga march down Main Street, U.S.A. Their first-time appearance in Magic Kingdom is in celebration of the new Star Tours 3-D attraction, coming soon to Disney parks. The “reimagined” Star Tours attraction will open at Walt Disney World Resort and Disneyland Resort in 2011. “

The annual holiday television special airs Dec. 25 on ABC-TV. Viewers can check online at DisneyChristmasDayParade.com for broadcast times in their area and to find out more information about the parade telecast.

Chart-topping Celebrities Ring in the Magical Holiday Spirit
From start to finish, the 2010 “Disney Parks Christmas Day Parade” is packed with festive musical performances from Walt Disney World Resort in Florida and Disneyland Resort in California.
(Please note: all talent subject to change)

• Global pop superstar Mariah Carey gives fans a tuneful taste of her brand-new holiday album, “Merry Christmas II You,” with a new song, “Oh Santa,” and her perennial holiday smash, “All I Want For Christmas Is You.”

• Amber Riley, who portrays Mercedes Jones on the hit TV series “Glee,” stars in a balcony performance above Main Street, U.S.A. as Disney princesses and princes join in a regal dance below.

• Ten-year-old soprano sensation Jackie Evancho sings “Pie Jesu,” one of Andrew Lloyd Webber’s songs that she wowed audiences with this year on the TV show “America’s Got Talent.”

• Direct from Disney Channel, “The Suite Life on Deck” star Debby Ryan rocks the parade route with her modern take on “Deck the Halls.”  The song is from the all-new Disney holiday movie, “The Search for Santa Paws.”  She’ll be joined by little Santa Paws himself, the star of the film, which is now available on Disney Blu-ray Combo Pack, DVD and Movie Download.

Disney Stars & More Gather for this Annual, Family-Friendly Television Extravaganza
Dressed in their holiday best, Mickey Mouse, Minnie Mouse, Pluto, Donald Duck and Goofy take to Main Street, U.S.A. to celebrate this special time of year and invite the entire Disney character family to join in the fun. And the fun doesn’t stop there.  Straight from the North Pole, Gingerbread Men, steadfast Toy Soldiers and prancing reindeer spread cheer during the festive parade, concluding with a very jolly guest of honor.

Also joining in the festivities:
(Please note: all characters/floats subject to change)

• Silly stepbrothers Phineas and Ferb, from the popular Disney Channel animated series, pack the parade with their playful antics.

• Even the dark side can’t resist the spirit of the season as Darth Vader and his legion of Stormtroopers from the Star Wars film saga march down Main Street, U.S.A. Their first-time appearance in Magic Kingdom is in celebration of the new Star Tours 3-D attraction, coming soon to Disney parks. The “reimagined” Star Tours attraction will open at Walt Disney World Resort and Disneyland Resort in 2011.

• The famous Disney Parks Toy Soldiers,lead the way during “The Toyland March.”  The brightly colored toys will be joined by the very merry Gingerbread Men.

• Wrapping up the TV special, the one-and-only Santa Claus, along with his regal reindeer, glide down Main Street, U.S.A. to spread the message of giving and joy this holiday season.

As Buzz Lightyear Might Say, “To Disney Parks, and Beyond!”
In addition to the parade fun at Disneyland Resort and Walt Disney World Resort, expert travel correspondent Samantha Brown will give viewers a taste of what’s coming soon around the globe. First, she checks in from Papenburg, Germany, with an exclusive preview of the Disney Dream, the newest Disney Cruise Line ship. The Disney Dream will launch in January 2011 from Port Canaveral, Fla. She also will give viewers a taste of the all-new Disney Destination, Aulani, a Disney Resort & Spa, Ko Olina, Hawai’i. The new resort opens Aug. 29, 2011.

What Time Does It Air?
The 27th annual “Disney Parks Christmas Day Parade” airs Christmas Day on ABC-TV.  Viewers are also asked to check their local listings or go online to DisneyChristmasDayParade.com for times and more information about the parade telecast.

The show is scheduled to air at the following times:

Text Updates Available
Fans are invited to join our parade mobile text alert program to get fun information about the parade.  Also, your holiday greeting could appear on the “Disney Parks Christmas Day Parade” broadcast!  Sign up now.  Text PARADE to 37275 (DPARK)*
(*Msg. & data rates may apply. If you’re under 18, get your parent’s permission first.)

Brian Curran
A Star Wars Fan since 1977 when he was just 2. Brian grew up in California where his family would often make trips to Disneyland. In 1987 he took his first “Trip to Endor” and doesn’t pass on a chance to go back! He also enjoys going to Conventions and meeting the actors from the Star Wars films.
Read more from Brian Curran
Tags: Walt Disney World, Disney Parks Christmas Day Parade, Mariah Carey
Loading Comments...