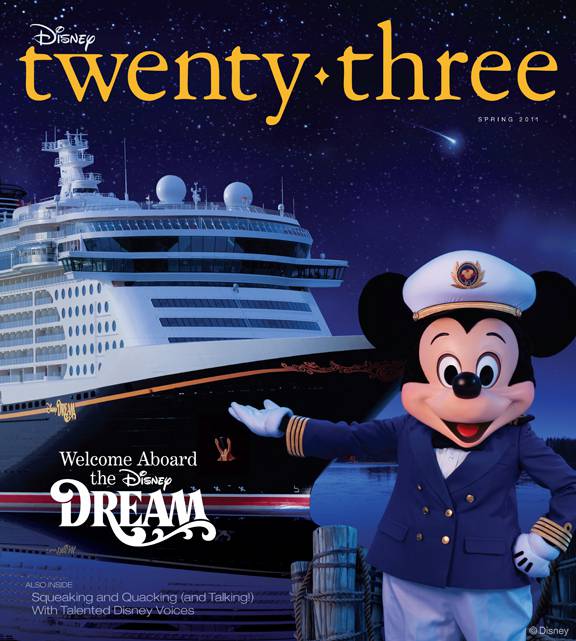 The cover story gives readers a stem-to-stern tour of Disney Cruise Line’s awe-inspiring new ship, Disney Dream, a mighty 4,000 passenger vessel equipped with cutting-edge technology and activities and entertainment for ultimate family fun on the high seas. Featuring an exclusive guided exploration of this third and largest ship in the Disney fleet, the spring issue of Disney twenty-three lets readers learn exciting details from the Imagineers who helped transform their creative vision into one of the world’s most spectacular floating vacation spots.

Imagineer Joe Lanzisero steers readers through the ideas that percolated early on in the minds of his fellow Imagineers as the seemingly impossible details for the Disney Dream took shape and became reality. Readers will discover how the design team conquered new cruise challenges such as providing every stateroom on board with an ocean view (even the interior cabins!) as well as giving guests a way to safely steal a look 12 feet over the side of the ship itself. In talking about the design process, Lanzisero claims it was “…like watching a great musician or a great dancer create. It just happens before your eyes; you never think about what goes into it.”

Disney twenty-three’s spring issue also includes an exclusive interview with Sir Elton John discussing his participation in Disney’s new animated feature film, Gnomeo & Juliet, a picturesque and comedic retelling of Shakespeare’s traditional love story that now stars garden gnomes. Sir Elton talks about how the film inspired him to spoof his own music, adding that “every artist should have a sense of humor about himself. Nothing is sacred. I think poking fun at yourself is one of the greatest things you can do.” He also chats about recording a duet with Lady Gaga called ‘Hello Hello” and provides surprising insight about other songs included in the film.

The spring issue also celebrates the 25-year collaboration between composer Danny Elfman and filmmaker Tim Burton, presenting fans with a retrospective of the quirky fruits of their collaborations. Elfman reveals the creative process behind their sometimes funny and sometimes eccentric, but always unforgettable, creations.

There’s much more in the spring issue of Disney twenty-three, including:

And there’s even more for Disney fans to explore! As with every issue of Disney twenty-three, D23 Members receive an added bonus. This issue comes with an exclusive D23 Expo 2011 luggage tag featuring the beloved chipmunks Chip and Dale that will be shipped to members exclusively. To become a D23 Member and learn more about membership and the spring issue of Disney twenty-three, visit www.disney.com/D23.

The name “D23” pays homage to the wonder and excitement that began in 1923 when Walt Disney opened his fledgling studio in Hollywood . D23 is the first official community for fans in Disney’s 88-year history. D23 gives its members a greater connection to the entire world of Disney by placing them in the middle of the magic through its quarterly publication, Disney twenty-three; a rich website at www.disney.com/D23; a collectibles line, The Walt Disney Archives Collection; and special events for D23 Members throughout the year. Fans can join D23 at www.Disney.com/D23, select shops at Disneyland® Resort and Walt Disney World® Resort and www.DisneyStore.com.

Brian Curran
A Star Wars Fan since 1977 when he was just 2. Brian grew up in California where his family would often make trips to Disneyland. In 1987 he took his first “Trip to Endor” and doesn’t pass on a chance to go back! He also enjoys going to Conventions and meeting the actors from the Star Wars films.
Read more from Brian Curran
Tags: D23 Expo, Bob Gurr, Tim Burton, Danny Elfman, Sir Elton John, Disney Dream
Loading Comments...