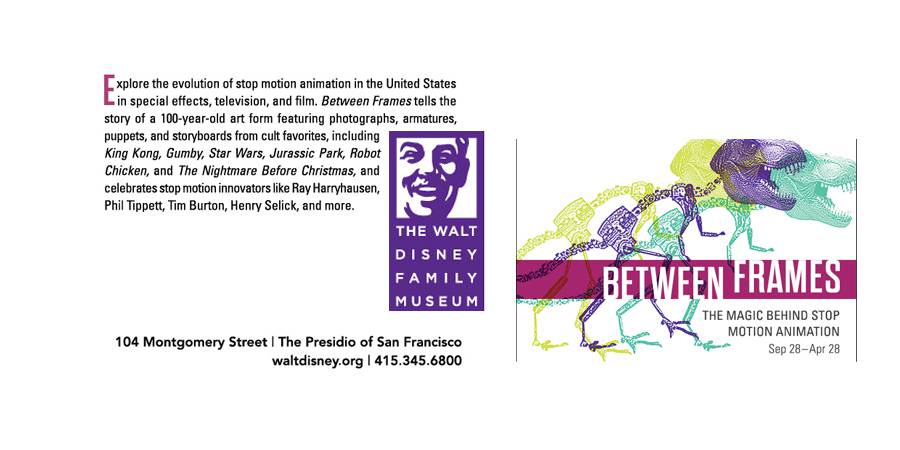 To celebrate the opening of the new exhibit. The Walt Disney Family Museum is having a after hours party. Friday (September 28 from 7pm – 10pm). “Where it’s AT-AT” includes a screening of The Empire Strikes Back!

For all the details on the new exhibit and The Walt Disney Family Museum please read the Press Release posted below.

Between Frames: The Magic Behind Stop Motion Animation

San Francisco, CA – August 16, 2012—The Walt Disney Family Museum (WDFM) is pleased to present the special exhibition Between Frames: The Magic Behind Stop Motion Animation, on view from September 27, 2012 to April 28, 2013 in the Museum’s Theater Gallery. Curated by WDFM Registrar and Curatorial Assistant Anel Muller, the exhibition explores the evolution of stop motion animation in the United States—especially in special effects, television, and film—while examining some of the key milestones and innovators including Willis O’ Brien (King Kong), Tim Burton (The Nightmare Before Christmas), Art Clokey (Gumby), Ray Harryhausen (It Came From Beneath the Sea), Henry Selick (Coraline and James and the Giant Peach), Phil Tippett (Star Wars and Jurassic Park), and more.

Between Frames tells the story of a 100-year-old art form that has been used in special effects, television, and film, and launched Walt Disney’s career in animation. The exhibition includes behind-the-scenes photographs from films such as The Lost World (1925) and Jason and the Argonauts (1963),   replicas of the original armatures from King Kong (1933) and Mighty Joe Young (1949), along with a Digital Input Device (DID) created just for Jurassic Park (1993). Puppets from the Robot Chicken (2005) opening sequence and a puppet mold from Gumby, as well as original armatures from The Nightmare Before Christmas (1993), Coraline (2009), and original storyboards from James and the Giant Peach (1996) will also be on view.

Visitors will be invited to manipulate and touch armatures at a special interactive station. A film loop of great moments in stop motion animation will also be running in the gallery.

The origins of stop motion animation are rooted in special effects. Discovered accidentally, stop motion was the key for filmmakers to open the door to fantastical realities. Stop motion animation enabled films like The Lost World (1925), King Kong (1933), It Came From Beneath the Sea (1955), and the original Star Wars (1977) trilogy to transport the audience into worlds where anything was possible and the unexpected was certain.

Shorts were and still are the laboratories for most stop motion animators to test out new tools and techniques to improve the art form. Not only has this format launched the careers of many filmmakers like Tim Burton but it is has been the only format of stop motion animation to be awarded an Academy Award® for Closed Mondays (1974).

Commercials and television series have both made use of stop motion animation. Commercials from cigarettes to band-aids and even memorable characters like the California Raisins (1986) were all brought to life with stop motion. Stop motion animated television series in the United States are limited in comparison to Europe and Asia; it remains a great platform for the art form with characters like Gumby, which appeared in over 234 episodes over four decades beginning in the 1950s. While more recently, Robot Chicken (2005) has revived interest in stop motion animated series while sparking the imaginations of a new television generation.

Between Frames: The Magic Behind Stop Motion Animation was organized by The Walt Disney Family Museum.

In conjunction with Between Frames: The Magic Behind Stop Motion Animation, the Museum is hosting a suite of special programs, screenings, and events.

Muren, Tippett, St. Amand, and Berg have created visual effects using stop motion in some of the most famous films of the last three decades. The holographic chess pieces in the original Star Wars, the Hoth snow battle in The Empire Strikes Back, the dragon Vermithrax in Dragonslayer, the mine car chase in Indiana Jones and the Temple of Doom, the flying rocket man in Rocketeer, and the deadly ED 209 robot in Robocop are just a few examples of their amazing craft.

Film of the Month: HallowScreen!

The Nightmare Before Christmas

In celebration of our special exhibition Between Frames: The Magic Behind Stop Motion Animation, the Museum will be screening the 1993 Disney stop motion musical fantasy film by producer and co-writer Tim Burton.

Animate Your Night: Where it’s AT-AT™

Join us as we celebrate the opening of Between Frames: The Magic Behind Stop Motion Animation, which reveals the magic behind movie creatures such as King Kong, the Jurassic Park Velociraptors, and the revered Star Wars AT-AT! Experience the galleries in a whole new light and illuminate your imagination with music, performance, film screenings, and hands-on art activities. Complimentary bites, a cash bar featuring a thematic signature cocktail, and much, much more.

Experience the galleries in a whole new light and illuminate your imagination with music, performance, film screenings, and hands-on art activities. Complimentary bites, a cash bar featuring a thematic signature cocktail, and much, much more.

The Presidio of San Francisco

Brian Curran
A Star Wars Fan since 1977 when he was just 2. Brian grew up in California where his family would often make trips to Disneyland. In 1987 he took his first “Trip to Endor” and doesn’t pass on a chance to go back! He also enjoys going to Conventions and meeting the actors from the Star Wars films.
Read more from Brian Curran
Tags: The Nightmare Before Christmas, Robot Chicken, Indiana Jones, Rocketeer, Dennis Muren, Phil Tippett, Tom St. Amand, Jon Berg, Hal Hickel, Ray Harryhausen
Loading Comments...