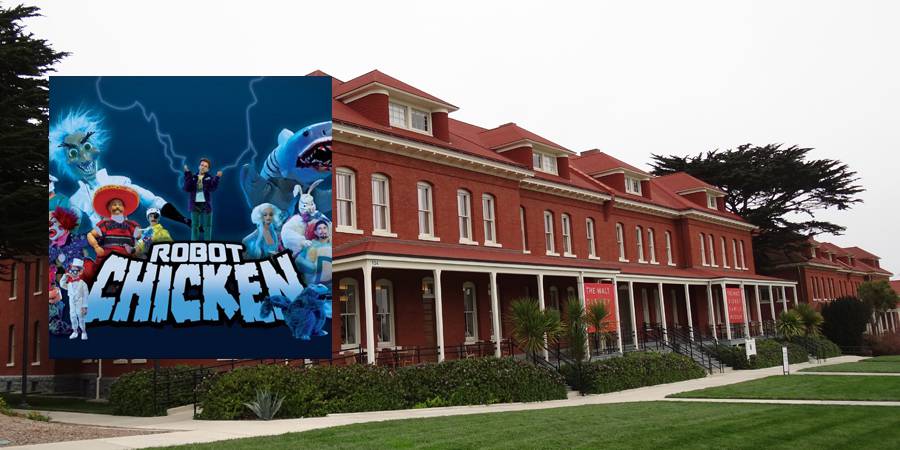 Join the creators of Robot Chicken and the founders of Stoopid Buddy Stoodios at The Walt Disney Family Museum in San Francisco, CA next weekend for an after-hours party, programs and a workshop! Continue reading for the details of next weekend’s events.

San Francisco, CA (April 1, 2013)—Celebrate the closing of exhibitionBetween Frames: The Magic Behind Stop Motion Animation with a lineup of events featuring the creators of Robot Chicken and the founders of Stoopid Buddy Stoodios! Join the team comprised of Seth Green (creator), Matthew Senreich (creator), John Harvatine IV (owner), Eric Towner (owner), and Alex Kamer (animation supervisor) for an after hours party, programs, and a workshop, exclusive to The Walt Disney Family Museum the last weekend of April.

AFTER HOURS PARTY
Animate Your Night: The Island of Misfit Toys
Friday, April 26 | 7–10pm | Museum-wide
Party with us after hours for a night full of misfit adventure! Join the creators of Robot Chicken and the founders of Stoopid Buddy Stoodios as they present behind the scenes footage and episode clips, followed by a Q&A. Enjoy eats from Adam’s Grub Truck and Me So Hungry, then have a hair-raising sip of our signature cocktail: The Evil Doctor.

PANEL DISCUSSION
The Making of Robot Chicken
Saturday, April 27 | 2pm | The Theater
Join the crew from Stoopid Buddy Stoodios, the masterminds behind the stop motion TV show Robot Chicken, for a behind-the-scenes look at the making of this modern cult favorite.

Between Frames: The Magic Behind Stop Motion Animation

Free for members or with Museum admission

Hours:             10am to 6pm, Wednesdays through Monday; closed on Tuesdays and the following public holidays: New Year’s Day, Thanksgiving, and Christmas.

Brian Curran
A Star Wars Fan since 1977 when he was just 2. Brian grew up in California where his family would often make trips to Disneyland. In 1987 he took his first “Trip to Endor” and doesn’t pass on a chance to go back! He also enjoys going to Conventions and meeting the actors from the Star Wars films.
Read more from Brian Curran
Tags: Walt Disney Family Museum, Robot Chicken, Seth Green
Loading Comments...