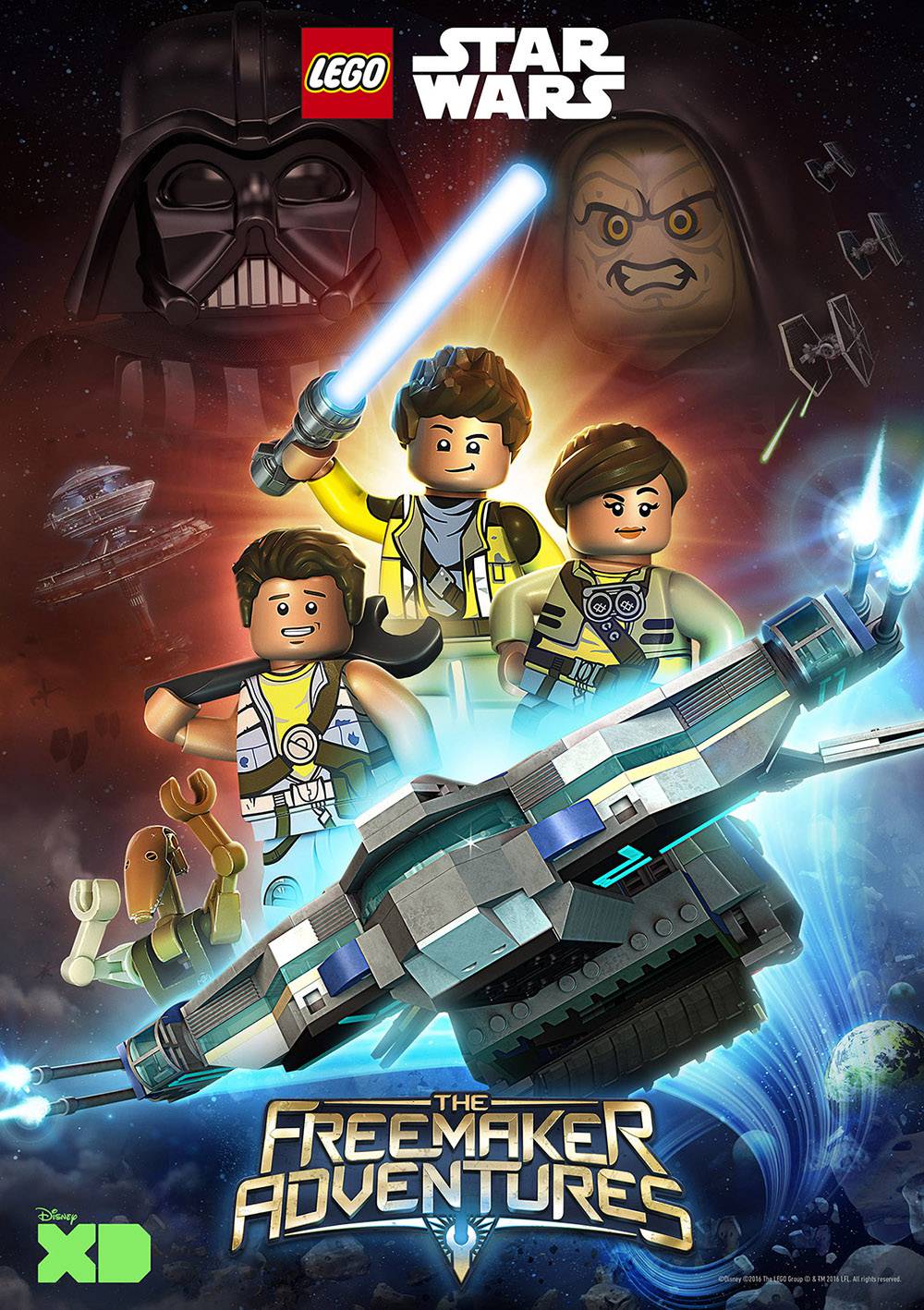 LEGO Star Wars: The Freemaker Adventures” is an all-new animated television series scheduled to debut this summer on Disney XD in the U.S. The fun-filled adventure comedy series (set between Star Wars: Episode V The Empire Strikes Back and
Star Wars: Episode VI Return of the Jedi) will introduce all-new heroes and villains in exciting adventures with many familiar Star Wars characters.

IS COMING TO DISNEY XD THIS SUMMER

“LEGO Star Wars: The Freemaker Adventures” is an all-new animated television series scheduled to debut this summer on Disney XD in the U.S. The fun-filled adventure comedy series will introduce all-new heroes and villains in exciting adventures with many familiar Star Wars characters.

Told in the whimsically-charged style that audiences have come to expect from LEGO Star Wars entertainment, the series stars the Freemakers, a family of scavengers who build and sell starships from the scoured debris of space battles strewn throughout the galaxy.  When their youngest discovers a natural connection with the Force through an ancient artifact – the Kyber Saber – his world is turned upside down, and he and his family are thrown into an epic struggle against the Empire to restore peace and freedom to the galaxy. Throughout their adventures, the Freemakers explore new worlds, meet new and familiar characters, and learn the true value of what it means to be a family.

“We are very excited to launch for the first time a TV series with Disney XD,” said Jill Wilfert, vice president, licensing & entertainment at the LEGO Group. “The creative team behind ‘The Freemaker Adventures’ is extremely talented, and the series is a great testament to our longstanding and successful partnership with Lucasfilm and Disney. The show masterfully combines the rich heritage of storytelling, great characters, action and adventure in a galaxy far, far away with the creativity, imagination and humor that only LEGO Star Wars can deliver. We are sure fans young and old are going to love the show.”

“With ‘The Freemaker Adventures’ we are thrilled to bring all new stories to life that could only be realized in the LEGO Star Wars universe,” said Carrie Beck, vice president, animation development at Lucasfilm. “We are embarking on an unprecedented collaboration that will allow us to extend the narrative experience of the Star Wars saga with the same playful spirit that’s always made LEGO Star Wars so much fun to watch. We are so thankful to have such great partners in the LEGO Group, Disney XD and series developers Bill Motz and Bob Roth.”

Disney XD is a basic cable channel and multi-platform brand showcasing a compelling mix of live-action and animated programming for kids age 6-11, hyper-targeting boys and transporting them into worlds full of humor, unexpected fun and inspiring action-filled adventures. Disney XD-branded content spans television, online, mobile and VOD platforms. The programming includes series, movies and short-form, as well as sports-themed programming developed with ESPN. In the U.S., Disney XD is seen on a 24-hour, advertiser supported network that reaches over 77 million households via its basic cable and satellite affiliates. In total, there are 31 Disney XD channels available in 25 languages around the world.

Lucasfilm Ltd., a wholly owned subsidiary of The Walt Disney Company, is a global leader in film, television and digital entertainment production. In addition to its motion-picture and television production, the company’s activities include visual effects and audio post-production, cutting-edge digital animation, interactive entertainment software, and the management of the global merchandising activities for its entertainment properties including the legendary STAR WARS and INDIANA JONES franchises. Lucasfilm Ltd. is headquartered in northern California.

Lucasfilm, the Lucasfilm logo, STAR WARS and related properties are trademarks and/or copyrights, in the United States and other countries, of Lucasfilm Ltd. and/or its affiliates. © & TM Lucasfilm Ltd.

About the LEGO Group

The LEGO Group is a privately held, family-owned company with headquarters in Billund, Denmark, and main offices in Enfield, USA, London, U.K., Shanghai, China, and Singapore. Founded in 1932 by Ole Kirk Kristiansen, and based on the iconic LEGO brick, it is one of the world’s leading manufacturers of play materials.

Guided by the company spirit: “Only the best is good enough”, the company is committed to the development of children and aims to inspire and develop the builders of tomorrow through creative play and learning. LEGO products are sold worldwide and can be virtually explored at www.LEGO.com.

For more news from the LEGO Group, information about our financial performance and responsibility engagement, please visit http://www.LEGO.com/aboutus.

Brian Curran
A Star Wars Fan since 1977 when he was just 2. Brian grew up in California where his family would often make trips to Disneyland. In 1987 he took his first “Trip to Endor” and doesn’t pass on a chance to go back! He also enjoys going to Conventions and meeting the actors from the Star Wars films.
Read more from Brian Curran
Tags: Lego, Disney XD
Loading Comments...