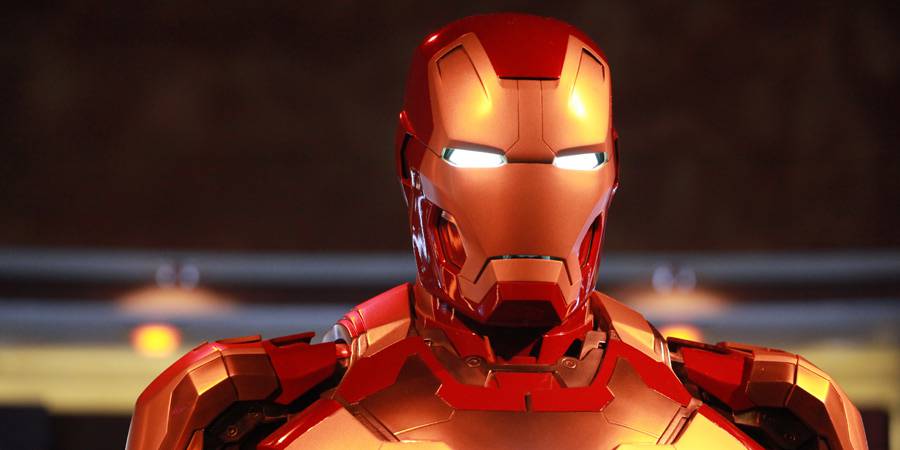 Marvel fans coming to Disneyland this Summer will be just a little bit happier now that Stark Industries Presents: Iron Man Tech has taken up residence in Tomorrowland’s aging Innoventions attraction.  While this isn’t a full blown ride, it’s a nice cross-promotion for Iron Man 3, arriving in U.S. theaters May 3rd.

Innoventions hasn’t seen this kind of attention since… ever, with waits reaching as long as one hour on peak days.  If you plan your day accordingly and visit Innoventions later in the afternoon, there is virtually no wait for this exhibit, which is the more appropriate wait-time for Tony Stark’s Hall of Armor.

While you’re in the Hall of Armor, a short narration by Paul Bettany playing Jarvis can be heard.  That extra bit of authenticity makes the exhibit even more awesome than it already is.  I mean, it’s a whole mess of Iron Man suits, from Mark I through Mark VII and the latest one standing dead center, the Mark 42.  If this doesn’t tickle your comic book geek bone, I’m not sure what will.

As an extra bit of fun, guests can “suit up” in a virtual Iron Man suit of their own in an interactive Kinect display.  Two guests go at a time with three minutes of game play each.  If you do the math, you might be waiting in line for quite a while.  Lining up for this begins through a corridor of still photographs from Iron Man 3.

Iron Man 3 posters were distributed opening weekend of “Iron Man Tech” but it’s not clear if this will be continued practice.

Stark Industries Presents: Iron Man Tech will be on display at Disneyland through September so make sure to make some time out of your day to check it out. And don’t you worry, you can still check out ASIMO the robot and the Dream Home exhibits in Innoventions while you’re there.

David Yeh
A long time fan of both Disney and Star Wars, he has a hard time resisting the temptations of Disney’s merchandising force. If you see pictures of the toys and pins, you can bet they are from Dave, our resident collecting guru.
Read more from David Yeh
Tags: Tomorrowland, Iron Man 3, Innoventions
Loading Comments...