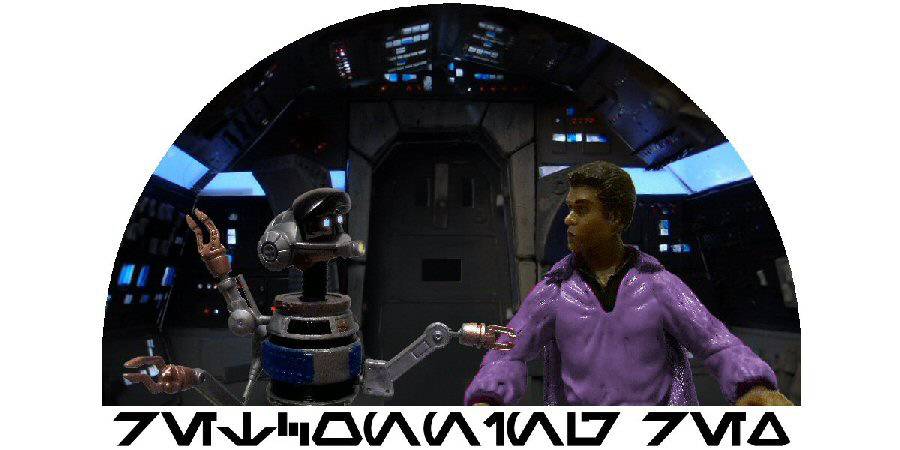 If you’re like me, up until Star Tours: The Adventures Continue, you believed that the RX pilot droid was a brand-new model shortly after the end of Return of the Jedi.

But now we know that RX’s were actually in existence prior to A New Hope, which led me to reconsider an obscure passage from L. Neil Smith’s 1983 novel Lando Calrissian and the Mindharp of Sharu. And the traits of the 1986 Rex pilot dovetail pretty nicely with the descriptions from the older novel.

The book is set approximately four years prior to the Battle of Yavin, as things are reckoned in the Star Wars chronology; a young and so far clean-shaven Lando has recently won a starship called the Millennium Falcon in a game of sabacc, but he’s still an “abysmally amateurish astrogator and ship-handler”.

Within the first twenty pages, he “hastily” rents a pilot droid while making a fast getaway from an asteroid in the Oseon system. This requires both a substantial deposit at the rental agency and the removal of the right-hand copilot seat, because the droid’s base is bolted straight to the deck.

Unfortunately, the pilot-bot is glitchy, and Lando must do the flying himself, skidding onto the tarmac in the Rafa system. Clad in a mauve outfit, Lando exits the ship and spots mynocks on the thrust-intermix cowling, and rushes back to the cockpit to ask Teguta Lusat Ground Control for advice on dealing with the problem.

This wakes up the robotic pilot, which Smith describes as a ‘glittering and useless Class Five pilot droid, its monitor lights blinking idiotically’ before giving it a single, truncated line of dialogue:

“Good evening, ladies and gentlemen,” the robot smirked, despite the daylight pouring through the vision screens from outside, “and welcome aboard the pleasure yacht Arleen, now in interstellar transit from Antipose IX to—“

Lando snarls and deactivates the “brainless rent-a-bot”. After the mynock situation is dealt with, he glibly asks Ground Control, “Would anyone care to purchase a practically new pilot droid? Over?”

Alas, it’s a sales pitch they’re all too familiar with, and they reply, “That rental outfit in the Oseon may not maintain offices here, but they’ve got treaty rights. You’ll have to send it back fast-freight. Expensive. Over and out.”

Lando craftily realizes that it’s cheaper to rent it for longer and ship it back slower, and vows to do nothing on his first night in the Rafa system but relax, feeling he’s earned it after dealing with “that confounded robot.”

So, to sum up, it’s a pilot droid with a non-humanoid design and a large base which precludes a regular chair. It’s notorious for breaking down, it gets shipped around as freight frequently, and it even says the words “Welcome aboard!” in its introductory speech.

If that doesn’t sound like an RX unit, I don’t know what does!

Special thanks to Roy Reeves for the photo of his fabulous scratch-built, scaled-to-the-figures Falcon cockpit!

Alex Newborn
Alex is a lifelong fan of the Star Wars movies and everything Disney, so his obsession with Star Tours comes as no surprise. Born in 1970, Alex visited Walt Disney World for the first time in 1975, and saw the original Star Wars film in its first theatrical run in 1977. He returned to Disney in the 80’s and the 90’s… riding STAR TOURS (twice!) on one fateful day in 1991. He has yet to visit Disney in the new millennium, waiting for both his children to be the required 40″ tall to ride STAR TOURS. “What I’d really like to see is a Tour chartered for the planet New Bornalex,” says Alex with a smile. The planet, mentioned first in Cloak of Deception, is a Tuckerization of Alex’s name, an honor bestowed on him in print by author Jim Luceno. Alex is currently at work on a partial realisation of his childhood Disney-in-miniature wish– he is constructing a hyper-accurate 1:18 scale Star Tours diorama to showcase his collection of park-exclusive action figures. In the meantime, Alex is always on the lookout for more STAR TOURS video or audio files, and other STAR TOURS memoribilia. Alex also is our site’s researcher, and comes with never seen before goodies, for your entertainment. Give him a round of applause guys.
Read more from Alex Newborn
Tags: RX-24, Lando Calrissian, Millennium Falcon
Loading Comments...