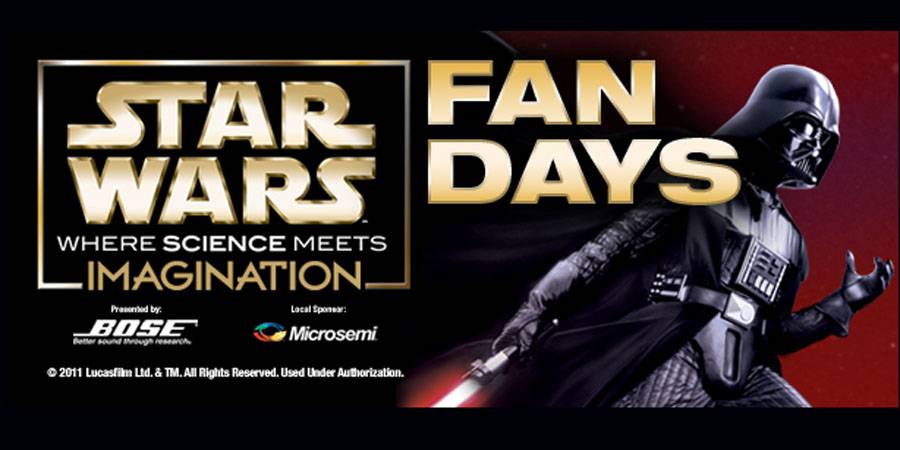 The Discovery Science Center sent out the following to announce the final Star Wars “Fan Day” and the upcoming Bubblefest.

SANTA ANA, CA – Visit Discovery Science Center (DSC) this Saturday for the final Star Wars: Where Science Meets Imagination ‘Fan Day’ as we take family fun to a galaxy not so far away. This ‘Fan Day’ features unique programs and activities, Star Wars character photo ops, and a costume parade for the kids! Plus, match trivia wits against Star Wars characters and fans to demonstrate mastery of the “Force.”  There are only a few weeks remaining of this blockbuster exhibit, so grab your lightsaber and take part in this epic experience before it’s too late. Also, kids ages 3-14 get free general admission when they wear a Star Wars costume on any Fan Day.*

WHAT
Join us for a day of exciting presentations and activities featuring photo opportunities with costumed characters, hands-on activities and more. Plus, bring the kids in Star Wars costume for our costume parade and brush up on your Star Wars trivia for our Trivia Challenge.

WHO
Discovery Science Center and Star Wars fans from across Southern California.

ABOUT DISCOVERY SCIENCE CENTER
Imaginations run wild through more than 100 hands-on exhibits at Discovery Science Center, Orange County’s leading destination for hands-on science fun. Take the Eco Challenge and become a green superhero, feel the power of a real rocket engine “launch”, explore the inner workings of a two-story tall dinosaur and try your best slap shot against the Anaheim Duck’s goalie! Traveling exhibits and annual events such as Bug Invasion and Bubblefest throughout the year ensure that there is always something new to discover.  Since 1998, Discovery Science Center has been a non-profit organization dedicated to educating young minds, assisting teachers and increasing public understanding of science, math and technology through interactive exhibits and programs. It is a community-wide resource where families come together to learn and have fun and school districts can use as an educational resource. Discovery Science Center welcomed its one-millionth visitor in 2003 and now hosts over 400,000 guests each year.

OC’S Most Amazing Spring Break Bubble Spectacular is Back and Better than Ever!
Deni Yang headlines Bubblefest XVI March 31-April 22

Bubblefest, the Science Center’s most popular annual event is designed to help visitors appreciate and understand the scientific principles and mathematics of bubbles, and to let them explore the world of bubbles in a fun, hands-on environment. At the science learning stations, guests can create a bubble mini-wall, bubble domes and much more, while learning about math and science principles like surface tension, elasticity, air pressure, and geometry.

This year’s Bubblefest will be the biggest and most impressive outdoor festival in the Center’s history! With an inflatable play zone, water spheres, and interactive science zones Bubblefest is truly fun for the entire family.  “Me in a Bubble”* offers the opportunity for guests to step inside a giant bubble and have their picture taken.

And if that’s not enough fun, make sure to bring an appetite, because some of the top gourmet food trucks in Southern California will be in attendance during the three week festival. Chow down on delicious food from Dogzilla Dogs, Lobsta Truck, Lee’s Philly, Calbi Truck, The Lime Truck and many more!  In addition, Orange County’s own Zov’s Bistro/Café will add to the experience as they serve selections of their mouth-watering Mediterranean cuisine.

*Bubblefest XVI is included with general admission to Discovery Science Center.
**The daily Mega Bubblefest Laser Show requires a separate fee of $7 for the general public
***“Me in a Bubble” also requires an additional charge.

NOTE: A special Media Preview of the Mega Bubblefest Laser Show is set for Friday, March 30, 2012 at 5:30 p.m.  Any interested members of the press should RSVP to Dan Nasitka.

ABOUT DENI YANG
Deni Yang has been combining entertainment, art and science performing in bubble shows for the most of his young life. Following in the footsteps of his parents Fan and Ana Yang, Deni has entertained audiences around the world with his marvelous stage performances. His first live appearance was at the age of four on RAI 1 Italian Television where he fascinated millions of viewers across Europe. It was the beginning of what would eventually bring Deni international acclaim at the Monte Carlo International Circus Festival (Monaco) in 1997, where he solidified his career as a bubble artist.

Deni has toured the globe with his spectacular stage show and has been featured at the National Museum of Science and Technology (Ottawa, Canada) and the Pacific Science Centre (Seattle, WA). He has also made numerous appearances on television shows around the world in Italy, Greece, France, and USA. Most recently Deni starred in the “White Bubble Show” in Seoul, Korea. For more information on Deni, visit http://bubbleart.com/

To set up an interview with Deni Yang contact Dan Nasitka, Manager of Public Relations at Discovery Science Center, at 714-913-5018 or by email at dnasitka@discoverycube.org.

Brian Curran
A Star Wars Fan since 1977 when he was just 2. Brian grew up in California where his family would often make trips to Disneyland. In 1987 he took his first “Trip to Endor” and doesn’t pass on a chance to go back! He also enjoys going to Conventions and meeting the actors from the Star Wars films.
Read more from Brian Curran
Tags: Discovery Science Center, Press Release, Star Wars: Where Science Meets Imagination
Loading Comments...