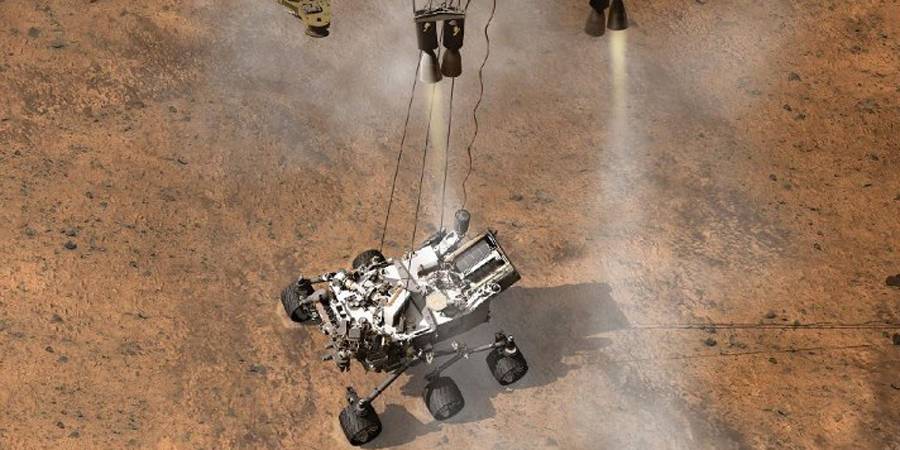 The Discovery Science Center in Santa Ana, California has a full size replica of the Mars Curiosity rover on display through Labor Day Weekend. The exhibition is included in the Science Center’s price of admission.

For more details on the Mars Curiosity rover and The Discovery Science Center, please continue reading…

The $2.5 billion project made its way onto the Martian terrain using a sky crane and the world’s largest supersonic parachute. The one-ton rover makes history as the largest and most sophisticated mobile laboratory ever launched to another planet.  Curiosity will be used to determine whether Mars could ever have supported life, study the climate and geology of the planet, and plan for possible human missions to Mars.

Young budding scientists can get a closer look at the Curiosity Mars rover by visiting DSC’s full-scale replica. The exhibit is on display through Labor Day and features four sections exploring the rover and its mission on Mars.

The sections for guests to explore include:

About Discovery Science Center
Imaginations run wild with 120 hands-on exhibits at Discovery Science Center (DSC), Orange County’s leading destination for hands-on science entertainment. Take the Eco Challenge and become a green superhero, feel the power of a real rocket engine launch and explore the inner workings of a two-story tall dinosaur! Plus, the Science Center’s signature events don’t just foster science education, but also provide entertainment for the whole family. From our annual Bubblefest and Rocket Launch to blockbuster traveling exhibits such as Star Wars™: Where Science Meets Imagination, there is always some new to experience.  DSC is a non-profit organization dedicated to educating young minds, assisting teachers and increasing public understanding of science, math and technology through interactive exhibits and programs. It is a community-wide resource where families come together to learn and have fun and school districts can use as an educational resource. For further information, visit www.discoverycube.org or call (714) 542-2823.

Brian Curran
A Star Wars Fan since 1977 when he was just 2. Brian grew up in California where his family would often make trips to Disneyland. In 1987 he took his first “Trip to Endor” and doesn’t pass on a chance to go back! He also enjoys going to Conventions and meeting the actors from the Star Wars films.
Read more from Brian Curran
Tags: Discovery Science Center, Discovery Cube, Mission to Mars, NASA