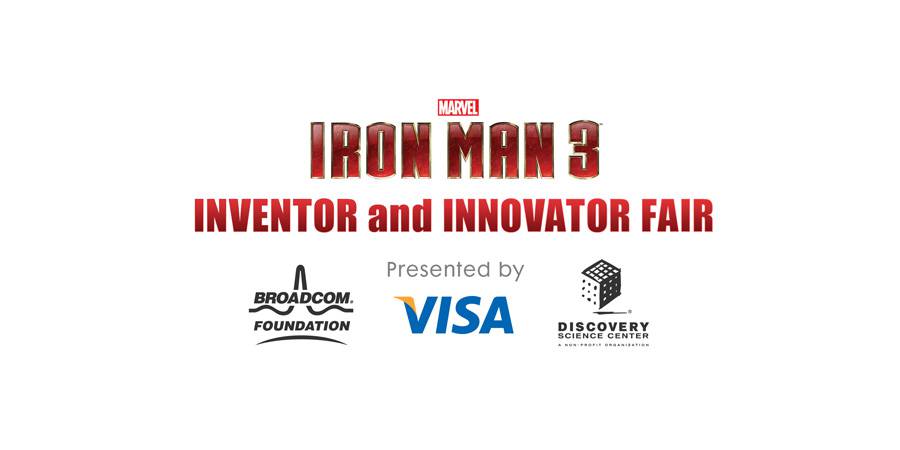 “Discovery Science Center, Broadcom Foundation and Marvel Studios, along with Visa Signature and the famous El Capitan Theatre in Hollywood, are proud to team up to sponsor a nationwide Marvel’s IRON MAN 3: INVENTOR and INNOVATOR FAIR in conjunction with the May 3rd release of Marvel’s “Iron Man 3,” starring Robert Downey Jr.”

Continue reading for all the details!

The 12 finalists of the Marvel’s IRON MAN 3: INVENTOR and INNOVATOR FAIR will win a trip to Southern California, provided by Visa Signature. The trip includes a behind-the-scenes tour of Disney Studios, a meeting with Disney Imagineers, a trip to Disneyland, a visit to Discovery Science Center, and more! INVENTOR and INNOVATOR FAIR finalists will also have their projects on display at the famous El Capitan Theatre in Hollywood, California, from May 3rd – June 20th. The competition concludes at the El Capitan Theatre on May 3rd when four Grand Prize winners will accept their awards at a special ceremony, on stage prior to the showing of Marvel’s “Iron Man 3.”

Sixth through ninth-grade girls and boys across the nation are invited to participate, including those who have competed in Broadcom MASTERS®, a program of Society for Science & the Public (SSP). For more information, rules and how to apply, visit www.discoverycube.org/ironman3.

“Marvel’s Iron Man 3: Inventor and Innovator Fair participants are the next generation of forward thinkers and innovators that will lead us into the future with scientific breakthroughs, engineering feats and technological advances. They are the real-life Tony Starks of tomorrow!” said Mike Pasciullo, Marvel’s SVP, Brand Planning & Communications.

Participating students are being asked to produce innovative, inventive projects based on themes from Marvel’s “Iron Man 3” —science, technology, engineering and math-related concepts and practices. Marvel’s IRON MAN 3: INVENTOR and INNOVATOR FAIR competition is encouraging students to submit projects that align with the National Academy of Engineering’s (NAE) Grand Challenges for Engineering™.

Some of the themes of the NAE Grand Challenges related to Marvel’s “Iron Man 3” are: (1)Develop Carbon Sequestration Methods, including projects involving themes of eco-friendly car development; (2) Engineer Better Medicines, with projects that focus on global disease prevention, limb regeneration and the study of body armor that protects injured body parts such as the heart; (3) Secure Cyberspace, inspiring projects that can lead to the development of new technologies that can redefine innovative security measures; and (4) Engineer the Tools of Scientific Discovery, in fields such as micro-technology, aeronautics or robotics.

About Marvel Entertainment
Marvel Entertainment, LLC, a wholly owned subsidiary of The Walt Disney Company, is one of the world’s most prominent character-based entertainment companies, built on a proven library of over 8,000 characters featured in a variety of media over seventy years. Marvel utilizes its character franchises in entertainment, licensing and publishing. For more information visitmarvel.com.

About El Capitan Theatre
Step into Hollywood’s glittering past at the legendary El Capitan Theatre, which made its debut on May 3, 1926 as Hollywood’s first home of Spoken Drama. This grand theatre has been restored to its original elegance of Spanish Colonial exterior and boasts a colorful and lavish East Indian interior designed by renowned San Francisco architect G. Albert Lansburgh. In 1941, Orsen Welles’ Academy Award® winning CITIZEN KANE made its World Premiere at the El Capitan. As an exclusive first run theatre for Walt Disney Studios, today the El Capitan Theatre sets a new standard for World Premieres, live stage shows, Disney attractions, and other special events that have helped restore showmanship to Hollywood Boulevard. For more information, visit www.elcapitantickets.com or call 1-800-DISNEY6.

About Discovery Science Center
Imaginations run wild with over 120 hands-on exhibits at Discovery Science Center (DSC), Orange County’s leading destination for hands-on science entertainment. Take the Eco Challenge and become a green superhero, feel the power of a real rocket engine launch and explore the inner workings of a two-story tall dinosaur! Plus, the Science Center’s signature events don’t just foster science education, but also provide entertainment for the whole family. From our annual Bubblefest and Rocket Launch to blockbuster traveling exhibits such as Indiana Jones™ and the Adventure of Archaeology, there is always something new to experience. DSC is a non-profit organization dedicated to educating young minds, assisting teachers and increasing public understanding of science, math and technology through interactive exhibits and programs. It is a community-wide resource where families come together to learn and have fun and school districts can use as an educational resource. For further information, visit www.discoverycube.org or call (714) 542-2823.

About Broadcom Foundation
Broadcom Foundation was founded to inspire and enable young people throughout the world to enter careers in science, technology, engineering and mathematics (STEM) through partnerships with local schools, colleges, universities and non-profit organizations. Broadcom Foundation is the proud sponsor of the Broadcom MASTERS®, a program of Society for Science & the Public – a national science and engineering competition for middle school children. The Foundation’s mission is to advance education in STEM by funding research, recognizing scholarship and increasing opportunity. Learn more atwww.broadcomfoundation.org.

Brian Curran
A Star Wars Fan since 1977 when he was just 2. Brian grew up in California where his family would often make trips to Disneyland. In 1987 he took his first “Trip to Endor” and doesn’t pass on a chance to go back! He also enjoys going to Conventions and meeting the actors from the Star Wars films.
Read more from Brian Curran
Tags: Discovery Science Center, Press Release, Robert Downey Jr., Discovery Cube, Iron Man 3, Marvel Studios, El Capitan Theatre