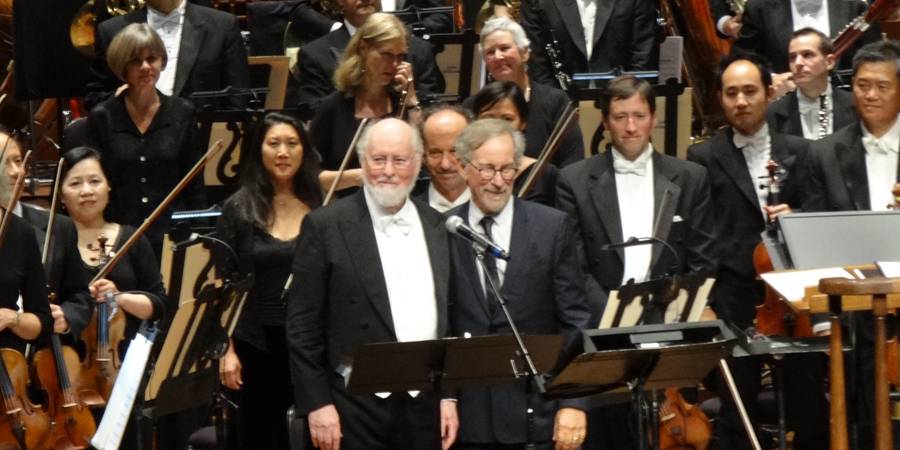 The legendary maestro of the movies, John Williams conducted the San Francisco Symphony on September 16 at the Davies Hall.  Iconic film director and friend Steven Spielberg served as the guest host for the night. Davies Hall is located across the street from San Francisco city hall. Ironic because that is where Spielberg filmed the “Fools! Bureaucratic fools!” scene from Raiders of the Lost Ark.

The moment John Williams took a step on stage he was greeted with the first of several well deserved standing ovations. The show began with Hooray for Hollywood with a video montage. The first half of the program also featured music from the films Far and Away, Harry Potter and Star Wars. The crowd erupted when the first few notes of the Star Wars main title began.

“Movies will bring us to tears, but music will make them fall.”  Steven Spielberg

Steven Spielberg spoke about how important the music for Close Encounters was because that was how humans communicated with the visitors in the film. The symphony played along to a few scenes from the film.

Mr. Spielberg then introduced the circus train scene from Indiana Jones and the Last Crusade. The scene was first showed with only dialogue and a few sound effects. Then scene was then showed again with the music played live to illustrate how important the film score is.

“The Duel” from The Adventures of Tintin was up next with video from several “swashbuckling” films playing above the orchestra, including clips from Pirates of the Caribbean.

Following the action-packed scores came a different mood.  An emotional performance of the Schindler’s List theme still has an effect on Spielberg and to the audience as well.

The program was set to end with “Adventures on Earth” from E.T. The Extra-Terrestrial. Once the last note hit the crowd erupted with a loud and long standing ovation.

Mr. Williams and Mr. Spielberg returned to the stage where Steven Spielberg said “We’re definitely coming back to San Francisco!” and John Williams nodded in agreement. The crowd loved that!

The first of two encore selections was “With Malice Toward None” from Spielberg and Williams latest collaboration Lincoln. The show ended with the Raiders March from Indiana Jones and another standing ovation from the audience and the SF symphony for John and Steven.

It was an amazing show, in a beautiful venue with music I love and have grown up listening to. Special thanks to Amelia Kusar and the San Francisco Symphony.

Hooray for Hollywood (with film)

Suite from Far and Away

Theme from Jaws (not listed in the program)

Excerpts from Close Encounters of the Third Kind (with film)

“The Duel” from The Adventures of Tintin (with film)

“Adventures on Earth” from E.T. The Extra-Terrestrial

From Lincoln “With Malice Toward None”

Brian Curran
A Star Wars Fan since 1977 when he was just 2. Brian grew up in California where his family would often make trips to Disneyland. In 1987 he took his first “Trip to Endor” and doesn’t pass on a chance to go back! He also enjoys going to Conventions and meeting the actors from the Star Wars films.
Read more from Brian Curran
Tags: John Williams, Steven Spielberg, San Francisco Symphony
Loading Comments...