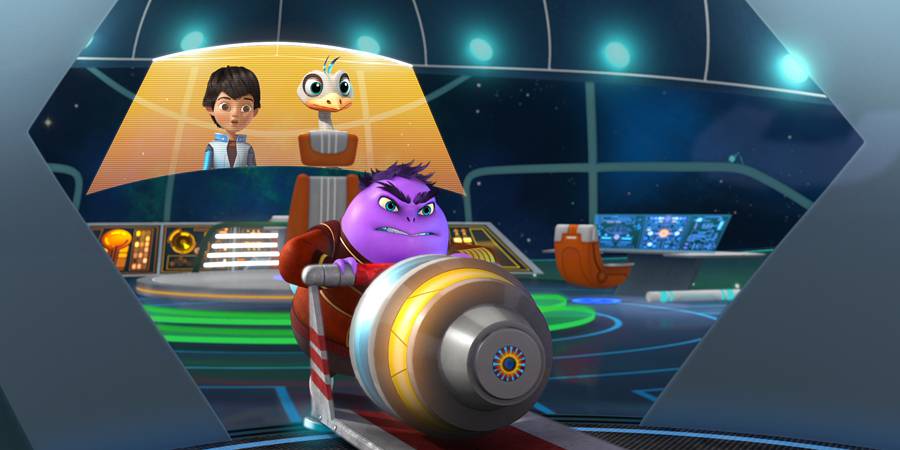 Miles from Tomorrowland “Who Stole the Stellosphere?” – When space thief Gadfly Garnett (voiced by Mark Hamill) sneaks onboard the Stellosphere and blasts away with Miles and Merc still inside, Miles’ uncle Joe (voiced by Adrian Grenier), captain of the SpaceGuard, comes to the rescue.

Disney Junior’s “Miles from Tomorrowland,” an intergalactic adventure series, blasts off FRIDAY FEBRUARY 6 on Disney Channel (9:00 a.m., ET/PT). Launching with four back-to-back episodes, it incorporates unique space and science facts into the storylines that chart the outer space missions of young adventurer Miles Callisto and his family as they help connect the galaxy on behalf of the Tomorrowland Transit Authority.

The series follows the explorations of Miles and his family – mom and ship captain, Phoebe; mechanical engineer dad, Leo; tech-savvy big sister, Loretta; and best friend pet robo-ostrich, Merc. Together, they explore new galaxies filled with peculiar aliens, space-age vehicles and high-tech gadgets, taking young viewers and their families on a futuristic journey designed to fuel kids’ natural interest in space and at the same time reminding them of the importance of what lies close to home – the family bond.

Space, science and technology experts from NASA and NASA’s Jet Propulsion Laboratory (JPL), the Space Tourism Society and Google serve as consultants on the series, which is designed to inspire young children’s interest in the exhilarating world of space exploration and the world that lies beyond their own. Curiosity and discovery is central to the show’s STEM curriculum and throughout the series, Miles and his family model friendship, teamwork, critical thinking, exploration of their environment and the celebration of family.

A “Miles from Tomorrowland: Missions” app for iOS and Android devices launches in conjunction with the show premiere in early February. Game players will rocket through the galaxy with Miles and Merc exploring mysterious planets and completing critical missions. Disney|ABC Television Group’s ground-breaking WATCH Disney Junior app will launch a Miles-branded game featuring a 3D virtual reality space simulator that enables kids to control Miles’ Photon Flyer by physically moving their handheld device to navigate a variety of planetary environments​.  An episode of “Miles From Tomorrowland” is being adapted into an Appisode for the popular Disney Junior Appisodes app, which allows fans ages 2-7 to touch, tap, swipe, tilt, shake and talk their way through various activities embedded into full episodes of Disney Junior shows. Additionally, a stand-alone microsite featuring character profiles, videos, and both online and offline planetary activities for the whole family has launched atDisneyJunior.com/Miles.

The multiplatform premiere schedule is as follows:

Preview of “Miles from Tomorrowland” is available on the WATCH Disney Junior app and WATCHDisneyJunior.com.

“Journey to the Frozen Planet/Attack of the Flickorax” – During a mission on an ice-covered planet, Miles must save Loretta as she is swept down a river towards a waterfall. Then, when lights go out on the planet Calpurnia, Miles and Loretta must protect their ship from light-eating Flickorax aliens.

This series of one-minute shorts, which launched on the popularWATCH Disney Junior app in December, spotlight Miles and Merc as they share helpful tips on navigating life in outer space, including everything from how to handle floating food in an anti-gravitational atmosphere to words of caution when dealing with alien life.

“Runaway Shuttle/Surfin’ the Whirlpool” (9:00 a.m. ET/PT) – Miles and Merc rescue a trapped pilot before his ship crashes into Jupiter’s moon Io. Then, Miles and Leo must work together to escape the Zuma Whirlpool waves on a father/son surf trip.

“Ocean in Motion/Explorer Exchange” (9:30 a.m. ET/PT) – The Callisto family is visited by alien Blodger Blopp as part of the Cosmic Explorers exchange program. Then, Miles and his family must figure out why a probe on a dry planet has sustained water damage.

“Game On/How I Saved my Summer Vacation” (10:00 a.m. ET/PT) – Miles’ skill at the game of Galaxias becomes crucial when the Callistos are captured by an alien queen. Then, while vacationing on the dried-out planet Alarbus, Miles and Loretta uncover an ancient secret.

“Journey to the Frozen Planet/Attack of the Flickorax”(10:30 a.m. ET/PT) – During a mission on an ice-covered planet, Miles must save Loretta as she is swept down a river towards a waterfall. Then, when lights go out on the planet Calpurnia, Miles and Loretta must protect their ship from light-eating Flickorax aliens.

Brian Curran
A Star Wars Fan since 1977 when he was just 2. Brian grew up in California where his family would often make trips to Disneyland. In 1987 he took his first “Trip to Endor” and doesn’t pass on a chance to go back! He also enjoys going to Conventions and meeting the actors from the Star Wars films.
Read more from Brian Curran
Tags: Dee Bradley Baker, Mark Hamill, George Takei
Loading Comments...