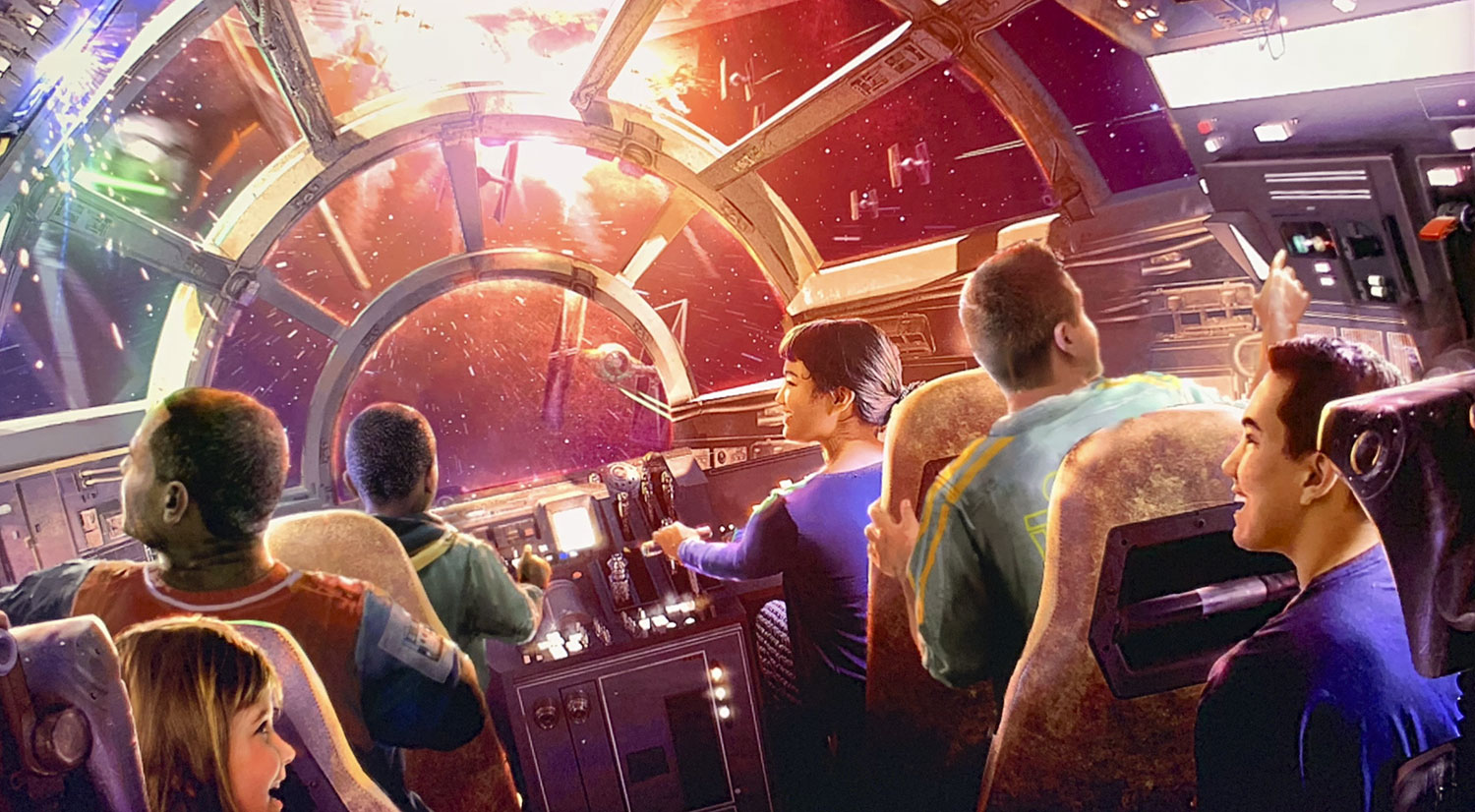 “And now the Millennium Falcon is flying to our Galaxy.” Star Wars: Galaxy’s Edge is just around the corner in 2019, and more details about one of the signature attractions was revealed on the Target exclusive bonus feature from SOLO: A STAR WARS STORY. In “The Falcon Through the Millennium”, the team behind the new attraction sit down to offer a taste of what’s to come. Below are just some of the highlights from the featurette…

“The Millennium Falcon that’s at Galaxy’s Edge… IS the Falcon.” – Pablo Hidalgo

“When we first started development of Star Wars: Galaxy’s Edge, one of the things we knew on day one was, we have to make the Millennium Falcon a key part of this experience. It’s a fan favorite ship, some would even say it’s a character, it has that kind of an iconic status in the world of Star Wars. When guests arrive at Black Spire Outpost, this remote, frontier trading port on the planet Batuu, there in nestled in one of the docking bays you’ll find the Millennium Falcon.”

“What we’ve created here will really give you the chance to see every detail, fully at scale and brought to life.”

“For guests visiting Black Spire Outpost, we’re going to give them this amazing opportunity to step aboard the Millennium Falcon.  You can turn 360 degrees around you and every last detail is exactly where you remembered it, how you remembered it.”

“You can explore the main chess room, you can really be immersed in the environment. You can actually push buttons and just kind of soak it all in.”

“The local spaceport is run by a somewhat shifty character named Hondo Ohnaka.”

“What he really needs is flight crews, that’s where we come in and we’re given our opportunity to pilot the Millennium Falcon on a one-of-a-kind interactive mission.”

“When it’s your turn, your flight crew gets called up and you get to make your way down that iconic corridor into that cockpit. You are truly in control of the fastest and most iconic ship in the entire galaxy. And Hondo, he’s gone ahead and added a couple extra seats so he can get as many of those flight crews through as possible. There are two hundred some odd buttons, knobs and switches and they all do stuff. The gunners in the center there, if you don’t fire back on the TIE Fighters fast enough, they’re gonna riddle the hull with laser bolts. The engineers in back, it’s really up to them to keep the whole Falcon in working order, so they’re back there furiously working away at their various systems.”

“You fly left and smash into that building, you’re gonna fly left and smash into that building. Go under that thing vs over that thing, that’s completely up to you! You bring back all the loot, and Hondo’s really happy with you and there’s not a scratch on the ship when you bring it back, you might find yourself with some extra galactic credits in your account.  But, do a poor job, you lose the cargo, you smash up the ship, you might come back owing more money than you started with. The boss man might not be too happy. When you roll across to the local cantina, the bartender might lean over and say, “hey, word on the street is that your name has been put on the list of a local bounty hunter, I’d watch out if I were you.” So, how well you do on this mission really does have an impact on your overall land wide story.

When our fans, when our guests, when our visitors to this planet, have an opportunity to not just see the Falcon but step inside, my hope is that their reaction is very similar to mine, which is: “Oh my gosh, here it is! For real! And I get to be a part of its story and make it a part of my story.”

“A visit to Galaxy’s Edge is basically the closest you can come to buying a ticket on some sort of spaceship and landing yourself in a galaxy far, far away.”

SOLO: A STAR WARS STORY is now available for digital download and wherever Blu-Ray and DVDs are sold.

David Yeh
A long time fan of both Disney and Star Wars, he has a hard time resisting the temptations of Disney’s merchandising force. If you see pictures of the toys and pins, you can bet they are from Dave, our resident collecting guru.
Read more from David Yeh
Tags: Millennium Falcon, Star Wars, Disneyland, Batuu, galaxy's edge, Black Spire Outpost, Disney Parks
Loading Comments...