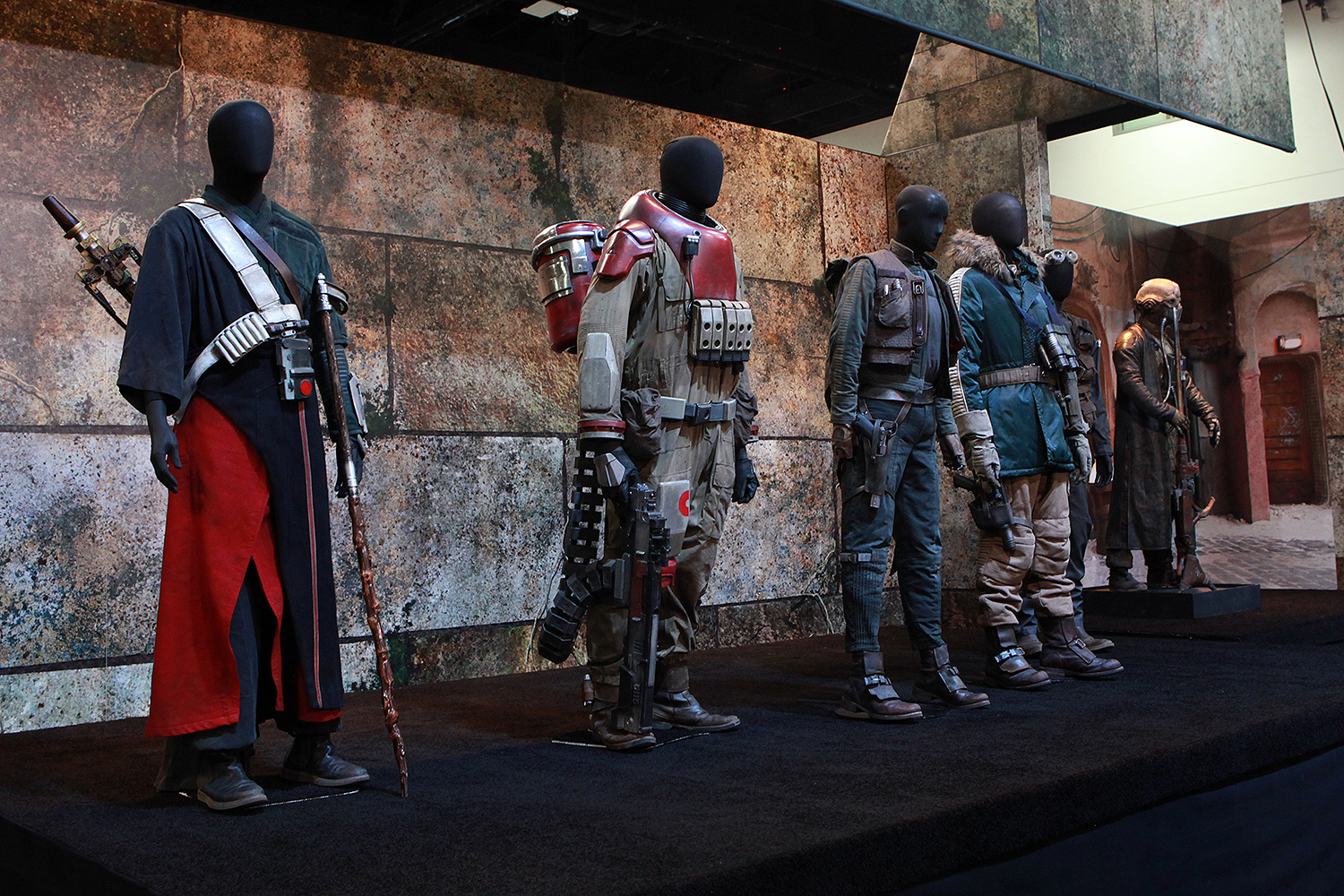 Brian Curran
SDCC 2016: Costumes of Rogue One
By David Yeh

The Costumes of Rogue One: A Star Wars Story first made their appearance at Star Wars Celebration Europe but they made the trek over to San Diego Comic-Con at the Lucasfilm pavillion along with some character descriptions. Check out the photos below:

Director Orson Krennic
As director of Advanced Weapons Resarch for the Imperial military, Orson Krennic is obsessed with the completion of the long-delayed Death Star project. A cruel but brilliant man, Krennic has staked his reputation on the delivery of the functional battle station to the Emperor.

Imperial Death Trooper
The elite soldiers of the Imperial Intelligence, Death Troopers are encased in specialized stormtrooper armor with a dark, ominous gleam. These soldiers serve as bodyguards and enforcers for Director Krennic, a highly placed officer within the Advanced Weapons Research division of the Empire.

Chirrut Imwe
Deeply spiritual, Chirrut Imwe believes all living things are connected through the Force.His sightless eyes do not prevent him from behing a highly skilled warrior. Though he lacks Force abilities, this warrior monk has rigorously honed his body through intense physical and mental discipline.

Baze Malbus
The harsh reality of his Imperial-occupied home world has hardened Baze Malbus into a pragmatic soldier and a crack shot with his heavy repeater cannon. Baze has a bravado that provides a marked contrast to the spiritual centeredness of his best friend and moral compass, Chirrut Imwe.

Jyn Erso
Putting behind a checkered past by lending her skills to a greater cause, Jyn Erso is impetuous, defiant, and eager to bring the battle to the Empire. Used to operating alone, she finds higher purpose by taking on a desperate mission for the Rebel Alliance.

Captain Cassian Andor
An accomplished Alliance Intelligence officer with combat field experience, Captain Cassian Andor commands respect from his Rebel troops with his ability to keep a cool head under fire and complete his missions with minimal resources.

Bodhi Rook
A former Imperial pilot, Bodhi has strong piloting and technical skills that he will put to use for the Rebellion. Ever practical, but highly anxious, Bodhi must gather his courage to bring the battle to the Empire.

Two Tubes
Edrio Two Tubes is a mercenary pilot who flies alongside his eggmate, Benthic. They share the nickname derived from the breathing apparatus that allows Tognath physiology to process oxygen atmospheres. Edrio’s native world of Yar Togna was conquered and occupied by the Empire, forcing him to flee as a refugee. With a desire to strike back at the Empire, Edrio and Benthic have allied with Saw Gerrera.

David Yeh
A long time fan of both Disney and Star Wars, he has a hard time resisting the temptations of Disney’s merchandising force. If you see pictures of the toys and pins, you can bet they are from Dave, our resident collecting guru.
Read more from David Yeh
Tags: San Diego Comic Con, Rogue One
Loading Comments...