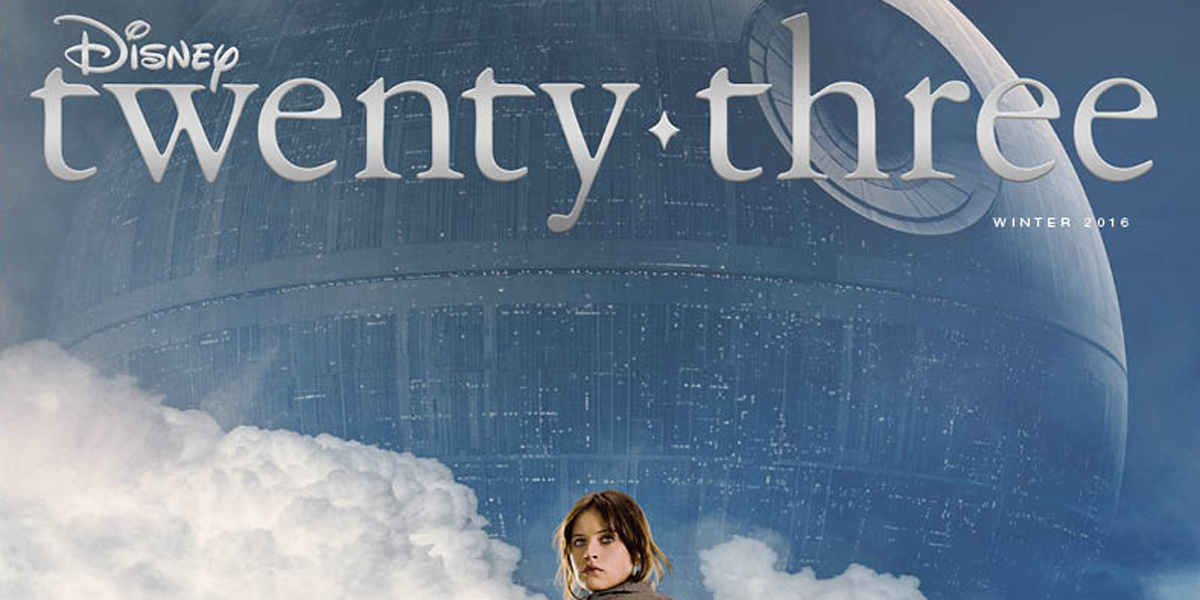 Disney Twenty-Three joins the Rebellion to celebrate the arrival of Rogue One: A Star Wars Story.

Exclusive interviews with stars Felicity Jones and Alan Tudyk, Director Gareth Edwards and Producer Kathleen Kennedy give fans a behind-the-scenes look at the making of the new film.

BURBANK, Calif. – November 2, 2016 – On December 16, Star Wars fans will blast off once again to a galaxy far, far away—only this time, it’s with a new set of characters (save for one Sith Lord) in Rogue One: A Star Wars Story. The film’s stars Felicity Jones and Alan Tudyk, director Gareth Edwards, and producer Kathleen Kennedy give readers a glimpse into the making of the film, which is centered on a group of rebels determined to steal the plans for the menacing Death Star. Kennedy reveals the origins of this first “stand-alone” film, while Edwards discusses the detailed planning that went into bringing Darth Vader back to the big screen.

The winter issue, exclusively for Gold Members of D23: The Official Disney Fan Club, also includes a look at the 30th anniversary of Disney Parks’ Star Tours, with detailed concept artwork and in-depth interviews. And Tudyk, who gives voice to droid K-2SO in Rogue One, talks about being a “lucky charm” for Walt Disney Animation Studios, having provided his vocal talents for such films as Big Hero 6, Frozen, Wreck-It Ralph, and this month’s Moana.

Plus, Auli‘i Cravalho talks about her star turn as the title character in Moana, and reveals she almost didn’t audition for the dazzling animated film, which opens November 23. The creators of the exhilarating new Iron Man Experience unveil details about the Marvel-themed attraction, which opens at Hong Kong Disneyland next January. And the team behind the enhancements on theDisney Wonder cruise ship gives fans an inside look at the unique experiences and exquisite details guests will enjoy when they next set sail.

There’s much more Disney magic in the winter issue of Disney twenty-three, including:

And starting December 1, D23.com will once again kick off the “D23 Days of Christmas.” Each day will include sweepstakes for incredible Disney prizes, dazzling photography, delicious recipes, original stories and videos, colorful crafts, and much more. D23 will also host several exclusive holiday events for members including: Light Up the Season with D23 on Sunday, December 4, at The Walt Disney Studios in Burbank and D23’s Disney Springs Holiday Celebration at Walt Disney World Resort in Orlando on Tuesday, December 13. Visit D23.com/D23Days to unwrap the holiday fun.

Disney twenty-three, which is delivered directly to fans’ doorsteps, is offered exclusively to D23 Gold and Gold Family Members as a benefit of their membership. The latest issue will begin arriving in mid-November.

The name “D23” pays homage to the exciting journey that began in 1923 when Walt Disney opened his first studio in Hollywood. D23 is the first official club for fans in Disney’s 90-plus-year history. It gives its members a greater connection to the entire world of Disney by placing them in the middle of the magic through its quarterly publication, Disney twenty-three; a rich website at D23.com with members-only content; member-exclusive discounts; and special events for D23 Members throughout the year.

Brian Curran
A Star Wars Fan since 1977 when he was just 2. Brian grew up in California where his family would often make trips to Disneyland. In 1987 he took his first “Trip to Endor” and doesn’t pass on a chance to go back! He also enjoys going to Conventions and meeting the actors from the Star Wars films.
Read more from Brian Curran
Tags: Press Release, D23 Magazine, Kathleen Kennedy, Rogue One, Felicity Jones, D23
Loading Comments...