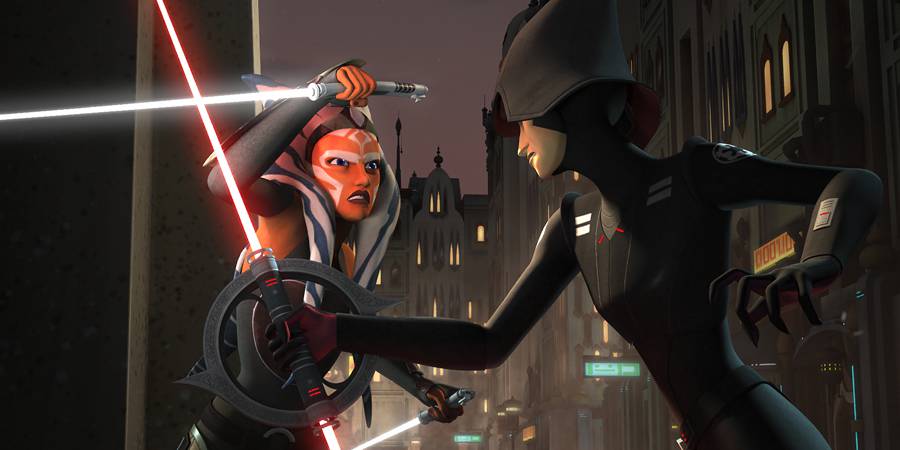 Big news for fans of Disney XD’s Star Wars Rebels…The show has been renewed for season 3!!! We have the press release and a preview of the next episode “The Future of the Force” that airs WEDNESDAY, DECEMBER 2 (9:30 p.m., ET/PT) on Disney XD.

The rebels work to protect the young ones from the Inquisitors’ pursuit when an all-new episode of “Star Wars Rebels” airs WEDNESDAY, DECEMBER 2 (9:30 p.m., ET/PT) on Disney XD.

Disney XD has ordered a third season of its animated series “Star Wars Rebels” from Lucasfilm. The third season is currently in production and scheduled to premiere in 2016. It was announced today by Marc Buhaj, Senior Vice President, Programming and General Manager, Disney XD.

In making the announcement, Buhaj said, “We are proud to bring our audience a third season of ‘Star Wars Rebels,’ a series that has resonated across generations.” Buhaj added, “The creative team behind the series continues to do a brilliant job in delivering on the key tenets that fans have come to expect from a Star Wars property, including adventure, hope and the battle between good vs. evil.”

The transformative second season of “Star Wars Rebels” featured the return of fan-favorite clone troopers Captain Rex, Captain Gregor and Commander Wolffe, and the debut of new characters including the Seventh Sister, a cunning and crafty Inquisitor who is tasked by Darth Vader to track down the rebels. Following a series of critical events, the lives of our heroes will be changed forever as Season Three begins.

Disney XD is a basic cable channel and multi-platform brand showcasing a compelling mix of live-action and animated programming for kids age 6-11, hyper-targeting boys and transporting them into worlds full of humor, unexpected fun and inspiring action-filled adventures. Disney XD-branded content spans television, online, mobile and VOD platforms. The programming includes series, movies and short-form, as well as sports-themed programming developed with ESPN. In the U.S., Disney XD is seen on a 24-hour, advertiser supported network that reaches over 80 million households via its basic cable and satellite affiliates.  In total, there are 31 Disney XD channels available in 25 languages around the world.

Lucasfilm Ltd., a wholly owned subsidiary of The Walt Disney Company, is a global leader in film, television and digital entertainment production. In addition to its motion-picture and television production, the company’s activities include visual effects and audio post-production, cutting-edge digital animation, interactive entertainment software, and the management of the global merchandising activities for its entertainment properties including the legendary STAR WARSand INDIANA JONES franchises. Lucasfilm Ltd. is headquartered in northern California.

Lucasfilm, the Lucasfilm logo, STAR WARS and related properties are trademarks and/or copyrights, in the United States and other countries, of Lucasfilm Ltd. and/or its affiliates. © & TM Lucasfilm Ltd.

Follow @DisneyChannelPR and @StarWars for the latest news on #StarWarsRebels, and check out StarWars.com  for more exciting news on the series.

Brian Curran
A Star Wars Fan since 1977 when he was just 2. Brian grew up in California where his family would often make trips to Disneyland. In 1987 he took his first “Trip to Endor” and doesn’t pass on a chance to go back! He also enjoys going to Conventions and meeting the actors from the Star Wars films.
Read more from Brian Curran
Tags: Disney XD, Dave Filoni, Star Wars Rebels
Loading Comments...