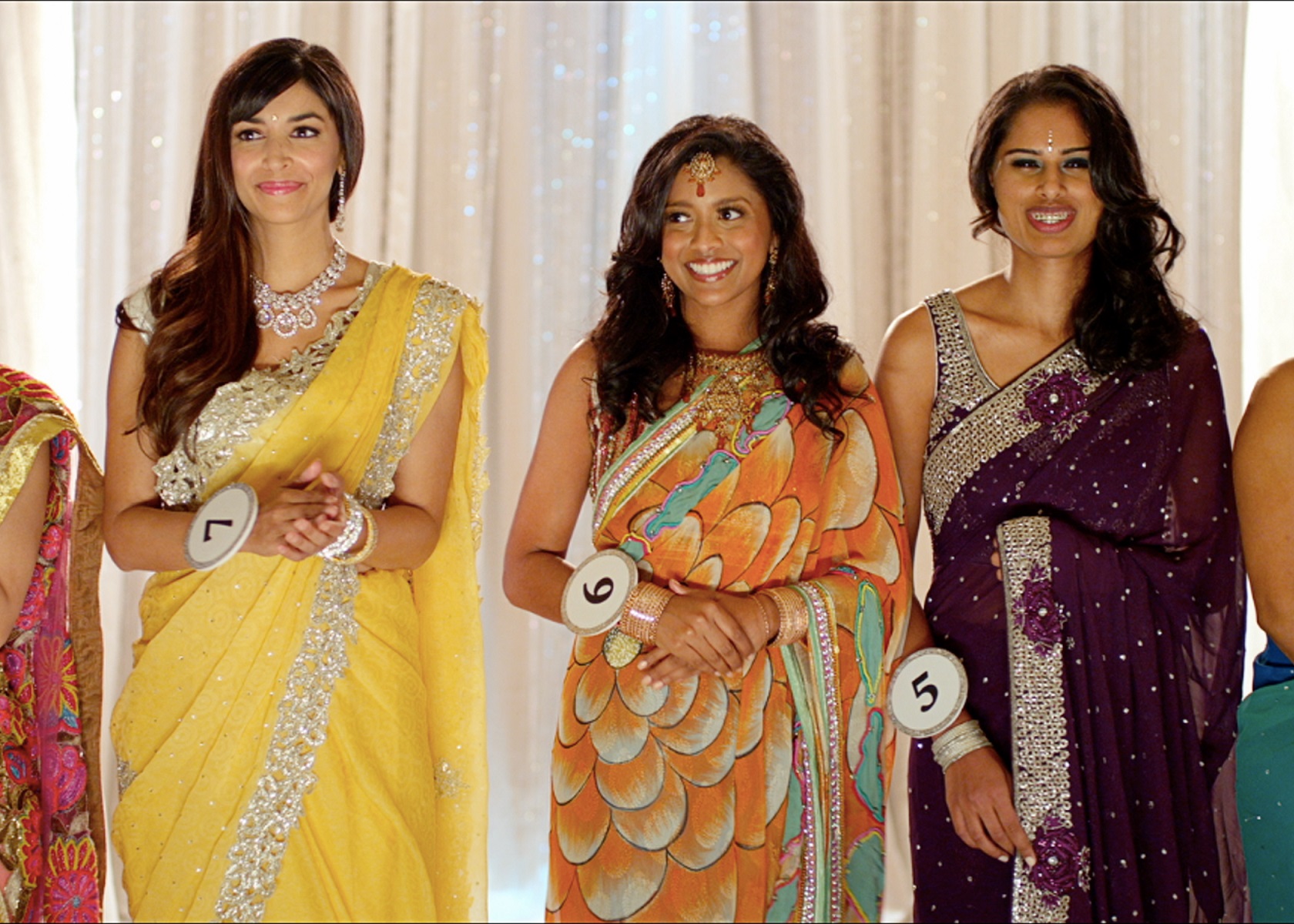 In Star Wars Rebels, Tiya Sircar plays the fun and articistic Sabine Wren, an Imperial Academy Drop Out with an expertise in weapons and explosives. In the film Miss India America, Tiya plays a recent high school graduate who is incapable of losing and does the impossible: joins a beauty pageant to win back her boyfriend. We spoke to Tiya recently to talk about Miss India America as well as the Rebels finale.

Hi Tiya! You’ve made the film, Miss India America over a year ago and it’s been a great success in the film festival circuit… how do you feel about it all now looking back?

It feels really nice to be where we’re at now! We took it to festivals all over the country almost exactly a year ago, so for it to now be out in theaters, in the world, and on-demand… practically everywhere as I understand it. That’s really exciting. All we wanted to do is to share it with as wide an audience as we can. It’s a very exciting prospect that people all over the place will be able to see our baby [laughs].

The film has a lot of strong roles for women but not just that, for women of color. It’s a very rare piece of American filmmaking! How did it all come together?

It is! Hopefully it will become less and less rare. As far as I’m concerned, thus far, it’s been a once in a lifetime opportunity. Hopefully that will change, you know, but Ravi Kapoor and Meera Simhan who co-wrote the script, and are a married couple. Ravi directed it and Meera played my mom, they wrote this film with practically all of the main characters with female comedic roles. And then we got peripheral male characters that are so, well, someone said that it wouldn’t pass the Bechdel test the other way around [laughs], which is kind of funny, but I’m okay with it! It was such a special experience to get to be in a movie that is a primarily South Asian cast, it’s a huge rarity. And then to do it with a very funny cast… it’s like a unicorn, you know? It’s such a gift. We had such a small budget and we didn’t have a lot of time to shoot this so it was a labor of love for many of us. Even with all of these restraints, I feel as if we had a really strong cast, and I think that just speaks to the wealth of talent that is in this business that South Asian Americans can bring.

It’s really true and I do hope there’ll be better opportunites to come! Now, you’re from Texas… how did your parents take to you being an actor?

I’ve been really fortunate. My parents are pretty cool as it is, but especially the fact that their kid has decided to move out to Hollywood by herself without any contacts, I just decided to show up and pursue my dream of being a professional actor. My parents are Indian immigrant parents who are PHD professors, they’re risk adverse, as many cultures are, I think it was very scary for them initially, especially my dad who was a very straight and narrow kind of guy. I think the idea of not knowing when or where your next job would come from gave him major anxiety. But I think that perspective, the unknown and lack of security gave them pause and concern for their kid, but as far as my choice of career, they’ve been very supportive, which is such a luxury because not everyone can do that. I think they would prefer me to have been a neuro-surgeon probably [laughs] but I think they have always known this is what I wanted to do. I kind of tease my dad sometimes because he and my mom would take me and my older sister to every class; I started dancing when I was 2 1/2 years old, musical theater, acting classes, figure skating classes, piano classses, all kinds of things. I think they were trying to make me a well-rounded person but I tease them that they were the ones who fostered my love of perfoming arts at a very young age. So I tell him he can only blame himself [laughs].

Have your parents seen the film yet?

You know they just finally saw it. They’re professors and they live in Ohio so it’s been hard to get them to coordinate their schedules, but we just had a film festival in Dallas and it was kind of nice because it was where I grew up. They flew down to see it for the first time and a bunch of old friends growing up came by, some extended family, so that was really great.

This film in particular celebrates being American and Indian. How satisfying was that for you?

Yeah, you know, I played a lot of ethnically ambiguous characters, where I could be “Amy” and I would be South Asian but that was besides the point. I like that and it’s totally fine! I also played a few characters that were Indian American but this is the first time I ever actually gotten to play a role that is so familiar to me – not the pageant world because that was totally foreign to me, but this world where the familial dynamics as well as the social dynamics in a South Asian community, I never got to explore any of that on film so that was really exciting and gratifying to get to do.

How close are you with the rest of the cast?

This is the third time Mira has played my mom – you know it’s growing but it’s still a small community of South Asian actors in Hollywood, but Ravi and Meera played my parents in a show and it was during that time that they were writing and rewriting the script, and I think that’s how this all happened where they asked me to come in and play the party of Lily. I read the script and immediately fell in love with it. I just knew that if this ever got made I would do whatever I needed to do to play this role – I felt an instant connection to this character. Kosha Patel who plays my best friend Seema in the movie, we’ve gone for a lot of the same roles so we’ve known each other tangentially but we really hit it off immediately which was great because we were supposed to be best friends who have known each other all our lives. It was so easy and we continued our friendship after that.

Before we go, I have to ask you about the Rebels Finale…

Oh my gosh. [laughs] What did YOU think?

I’m curious because I haven’t talked to anyone about it. So I’m just wondering…

I really thought it was fantastic. It’s just been a long time coming, with Ahsoka and Anakin.

[sighs] Seriously. I have for a long time suspected what may happen, some of those things were confirmed – I kinda accidentally eased dropped on a conversation between Dave [Filoni] and Freddie [Prinze Jr] many months ago. And you’re the first person I’m telling this to – he mentioned a Japanese samurai movie: Zatoichi. He said it to Freddie and I didn’t mean to over hear, or maybe I did, I don’t remember, but I was like “Zatoichi, remember that. Zatoichi.” and I didn’t know what it was or meant, but I googled it and of course Zatoichi is a blind samurai, and I was like “OH MY GOD are you going to be blind forever??”. I texted Freddie asking him what it meant and he’s all “dude, I don’t know” so I’ve kind of suspected that for a long time and I haven’t been able to share it with my fellow cast mates besides Freddie because it wasn’t my place to say. I wasn’t even supposed to know in the first place so I was just waiting for that to go down. And as far as Ahsoka goes, I thought we were going to know SOMEthing and I feel like I have no idea! Oh my God.

And Dave Filoni won’t tell us anything ever.

It has planted a lot more questions than answers.

It certainly has. Now, have you gone to Disneyland’s Season of the Force yet?

I’ve gotten to go to Disneyland and Walt Disney World quite a bit because of the show but I have not been since all the Star Wars stuff, so I have to fix that.

You have to find your Sabine Wren helmet!

Yeah yeah! I gotta do it. Hopefully I’ll get to do that soon.

Tiya, it was so great to talk to you

Nice talking to you too, thanks so much!

For more information about Miss India America and on where to download, visit: http://www.missindiaamericapictures.com
Trailer:

In Theaters March 25, On Digital HD and On Demand April 5

Set in the world of South Asian American beauty pageants, the comedy marks the feature film directing debut of actor Ravi Kapoor (“Crossing Jordan”), who wrote the screenplay with Meera Simhan, his wife and one of the film’s co-stars.

MISS INDIA AMERICA follows the travails of high-achiever Lily Prasad (Tiya Sircar), a recent high school graduate who has a concrete life plan: to become a brain surgeon, marry her boyfriend, Karim, have kids and live happily ever after. But the “Lily Plan” comes crashing down when Karim runs off with the reigning Miss India National beauty queen.
Incapable of losing, Lily decides to win him back by becoming the new Miss India National, and recruits the help of her best friend (Kosha Patel), despite seemingly long odds and competition from the impossibly perfect Sonia Nielson (Hannah Simone).

Special thanks to Tiya Sircar!

David Yeh
A long time fan of both Disney and Star Wars, he has a hard time resisting the temptations of Disney’s merchandising force. If you see pictures of the toys and pins, you can bet they are from Dave, our resident collecting guru.
Read more from David Yeh
Tags: Tiya Sircar, Sabine Wren, Miss India America
Loading Comments...