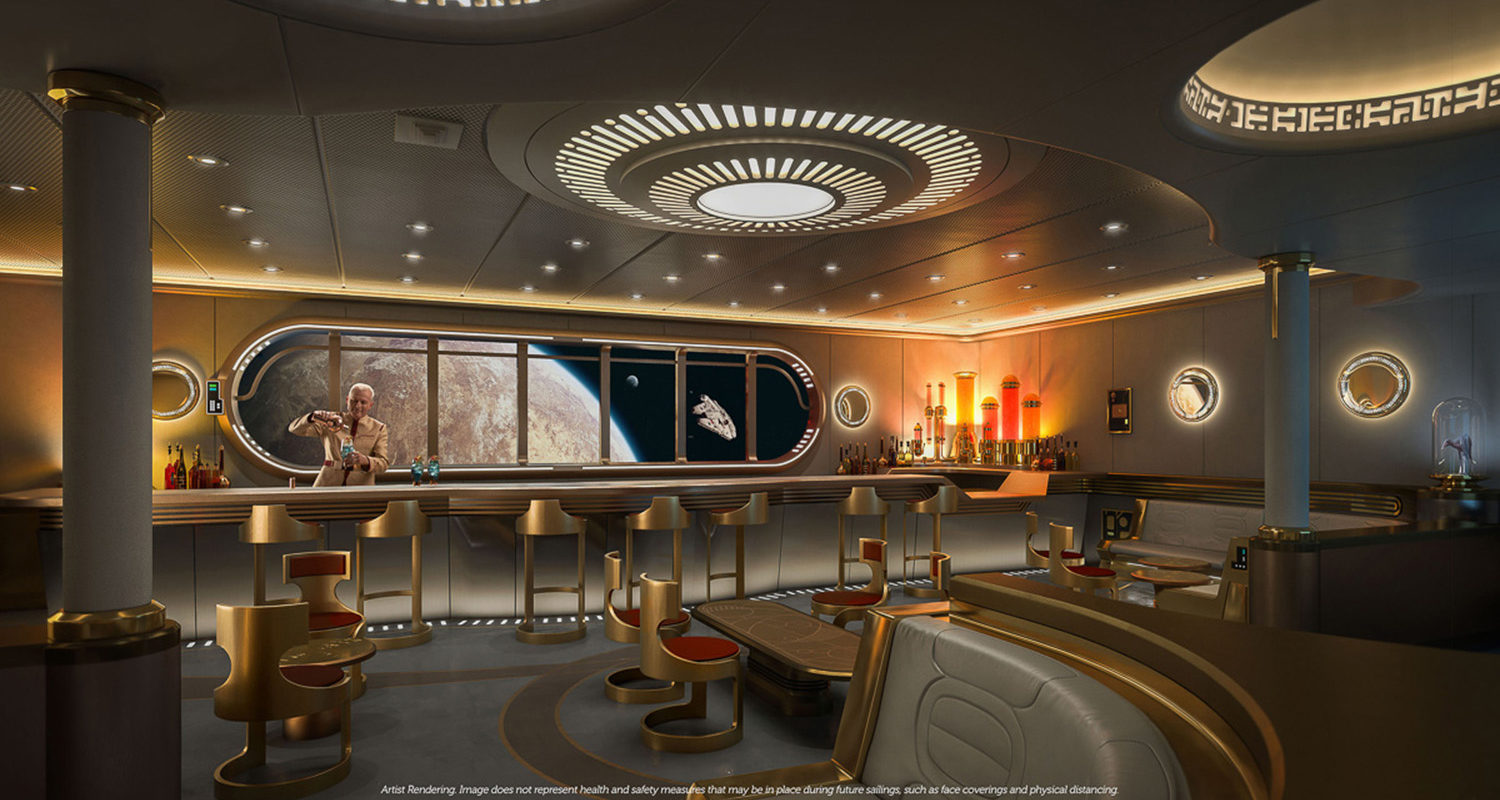 When the newest Disney Cruiseline launches next year in summer of 2022, guests will be able to drink in a galaxy far, far away at the Star Wars Hyperspace Lounge aboard the Disney Wish. This new dining experience is the latest in Star Wars adventures created by Walt Disney Imagineering.

“When you enter this first-of-a-kind lounge, you will board a luxury spaceship, where you will sip on otherworldly concoctions and enjoy galaxy-wide panoramic views of the worlds of Tatooine, Mustafar, Batuu, Endor, and more!”

Imagineer Danny Handke, having overseen the Star Wars areas for kids on the Disney Cruise had a different thought for the Disney Wish, speaking to StarWars.com:

‘What if we did a lounge that’s for grownups only at night? It becomes an adult playground for the world of Star Wars.’ And everyone just loved that idea.”

“We decided that since we’re on a cruise ship, it would be fun if the lounge is on a Star Wars ship,” Handke says. “Around that time, we had The Last Jedi and Solo, and it was kind of the more refined side of Star Wars, like Canto Bight and Dryden Vos’ ship. We thought, ‘Boy, that’s really unique and different. You know, we have Oga’s Cantina at Star Wars: Galaxy’s Edge. What if we explored, as a nice juxtaposition to that, doing kind of a Dryden Vos yacht ship?’ We landed on that, doing something sophisticated, which also matches the design of the Disney Wish.”


Handke also talks about how Endor works its way into the lounge:

“It’s my personal favorite scene,” he says. “You see the forest moon from Return of the Jedi and Kef Bir, the water moon from The Rise of Skywalker. When we designed this scene, we were talking about, ‘What should it be? Do we see Death Star debris? Let’s do the First Order era for that.’ So I asked the Story Group and ILM, ‘Could we do like, a little bit of Star Wars? What happens if we have some Resistance cruisers, and the First Order shows up? Can we do a little battle?’ They said, ‘You can do a little skirmish. Not a full-on battle, but a skirmish.’ And so we staged this really cool skirmish scene, where the Resistance and the First Order are fighting each other. You get the laser fire, you get the TIE fighter explosion, and then at the very end we have these three X-wings that come down in front of our screen and protect us. I am so stoked about it.”

Read more about what’s coming to the new Disney Wish here and also watch the presentation below:


The Disney Wish will sail its maiden voyage — a five-night cruise to Nassau, Bahamas, and Disney’s private island, Castaway Cay — on June 9, 2022, followed by an inaugural season of three- and four-night cruises to the same destinations from Port Canaveral, Fla. Bookings open to the general public on May 27, 2021.