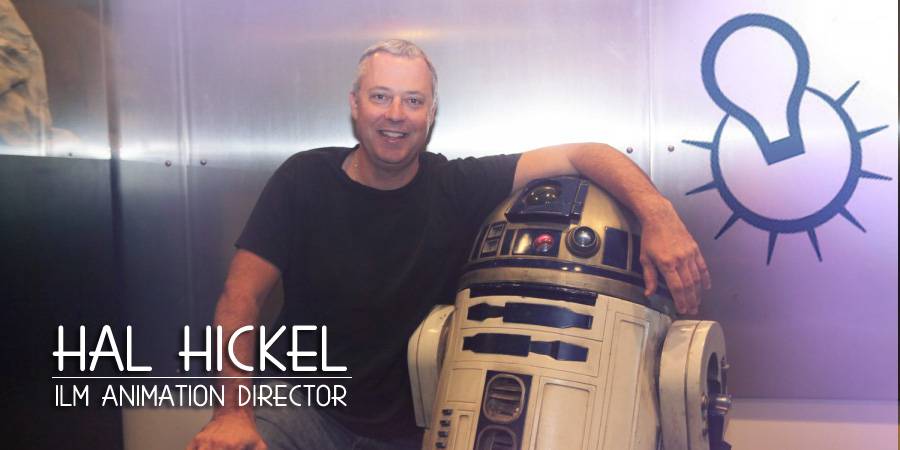 The last time we took a visit to Industrial Light & Magic, we spoke to Glen McIntosh, who helped contribute to Star Tours: The Adventures Continue.  This time we’re taking a stroll away from Tomorrowland and into New Orleans Square (or Adventureland for our East Coast readers) to speak with Hal Hickel, Animation Director at Industrial Light and Magic.  Hal has worked at ILM since 1996 and worked on many of cinema’s most memorable films beginning with Steven Spielberg’s The Lost World: Jurassic Park, but there’s a series of films that intrigued us the most: Pirates of the Caribbean.

EE: What got you into animation?

HH: I watched a lot of science fiction and fantasy movies as a kid growing up and got interested in stop-motion because of the original King Kong.  I saw it on TV and I had a librarian at grade school that organized an animation class which was a couple of weeks long.  That was a lucky thing because I was already interested in animation but I didn’t understand it that well.  That class helped me put the pieces together.  A couple of years later Star Wars came out and that broadened my interest in special effects in general.

EE: You’ve been with ILM since 1996.  Is there a favorite film you’ve worked on?

There’s a couple.  I’m really proud of the work done on the Pirates of the Caribbean films, particularly the Davy Jones character.  I think Rango would be the other.  That was just an awesome project all together.

EE:  Let’s talk more about Pirates of the Caribbean.  While working on Davy Jones, is it more helpful to have an actor like Bill Nighy to play off of?  He seems to give a lot of personality and little ticks that really define the character.

Yeah, absolutely.  We’re animators and we like the process where a bunch of different people will animate the same character over the life of the show.  We embrace that and that’s a great process for certain things but this was a different one.  The heart of Davy Jones was coming from one mind and that was Bill Nighy working with Gore Verbinski and bouncing off the other actors on the set.  We were reinterpreting that onto Davy Jones but also being very faithful to that performance because the facial features are different with tentacles, etc.  But rather than being a collaborative approach which is what animation tends to be, it was essential to have one central mind bringing the core eccentricities to the performance.

EE:  What about the newly added Davy Jones sequence in the theme park attraction?  Did you work on those as well?

Yes, there are three parts and I animated one of the vignettes.  Marc Chu and Maia Kayser did the other two.

EE:  Can you tell us more about how it came about?

Disney must have had some conversation with the filmmakers and I think they had plans to revamp the ride in certain respects.  They came to us and said they wanted to do a mist waterfall.  What was cool is that they didn’t just ask us to give them some animation, they told us what they were doing and we even cooked up a simulation of what it would look like on the projection so we can make lighting decisions.  It was really cool when they were installing the mist curtain for the tests down at Disneyland,., to walk around the ride when it’s shut down – that was super awesome.  That was the highlight of the whole experience actually!

EE:  Do you have a favorite Disneyland attraction?

Star Tours is really awesome.  I’ve only been able to ride the new one once or twice so far but my son has been on it a couple times and I’m dying to go back to try out all the different branching scenarios as much as I can.  I also love The Haunted Mansion.  Growing up in Riverside, CA, I’m of that generation where Pirates of the Caribbean and The Haunted Mansion are my core favorites. I always loved the original Star Tours and I love the new one as well.  I was actually in the first meeting four or five years before we actually started working on it!

EE:  While you didn’t work on the new Star Tours, you did get to work on the Star Wars prequels… what did you do for those?

I was an animator on the first one… Boss Nass.  I didn’t animate any Jar Jar.  There’s even a scene with both Boss Nass and Jar Jar walking together and even in that shot I didn’t animate Jar Jar.  I also did some Watto and Destroyer Droids.  On Episode II, I was Animation Supervisor on a few scenes like the Droid Factory or the Jedi Battle.

EE: Do you appear in any of the Star Wars prequels as a cameo?  Any action figures of Hal Hickel floating around?

HH: Yeah, in Episode II I played one of the Senate Guards beside the door where Mace Windu walks through.  So you can sort of have an action figure of me.  I was also able to get my son and myself into a small scene in the upcoming Pacific Rim, we’re very tiny.  And I’m the Kraken in Pirates 2. <laughs>

EE:  We were told that you submitted a Star Wars sequel to Lucasfilm when you were a kid.  Tell us about that.

When I was 12 years old, I wrote a letter to Lucasfilm about what they should do for the next Star Wars.  I wrote myself into it and I sent it off and I don’t remember where I sent it, but the response I got back was from Gary Kurtz’s personal assistant.  It was a typed letter very kindly saying that they’re not taking submissions but getting into the business takes luck and talent, you know.. it was very nice.  At the time I was very let down but I kept it and I didn’t realize until now how cool this was because it was typed up on the old Ralph McQuarrie letterhead.

When we finished Episode I we had a big breakfast and George Lucas came down to talk to the troops to thank them for their hard work and everything.  A few people brought in some posters and things for him to sign and a line formed.  Rob Coleman came up to me and said “Oh, you should get that letter!  You should show it to him!” I went and got the letter and he was very nice, he underlined the part about “Talent” and “Luck” and he wrote “You have it”, and then signed it.  It was really cool.

Oh, I have a lot of interest in Episode VII and I know nothing about it.  But just the idea of it being a completely new thing, it sounds fun.  It’s super exciting with Kathleen Kennedy at the top of the company too.

EndorExpress and its entire staff would like to thank Hal Hickel for spending some time with us!

Brian Curran
A Star Wars Fan since 1977 when he was just 2. Brian grew up in California where his family would often make trips to Disneyland. In 1987 he took his first “Trip to Endor” and doesn’t pass on a chance to go back! He also enjoys going to Conventions and meeting the actors from the Star Wars films.
Read more from Brian Curran
Tags: ILM, Pirates of the Caribbean
Loading Comments...