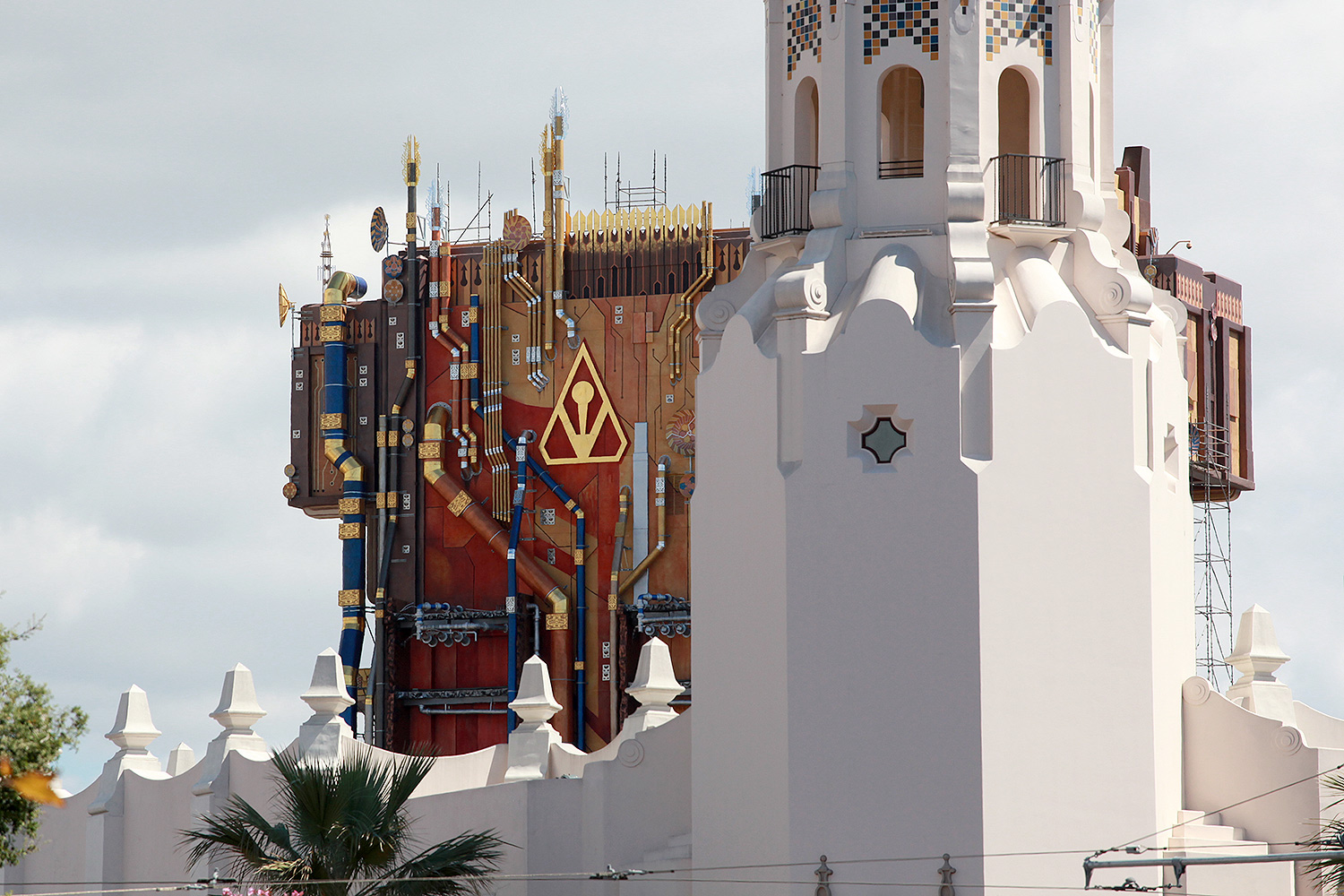 Hey everyone, we have a small photo update from this weekend.  We’ll take a quick look at the progress of Guardians of the Galaxy: Mission Breakout and also a look at Autopia’s latest update with Honda’s robot, ASIMO. Buckle up!

Over in Hollywood Land, just like in real life, Marvel Studios is making their mark seen at Disney California Adventure.

The sequel, Guardians of the Galaxy Vol 2 hits theaters on May 5th but the attraction won’t be ready officially until May 27, 2017. That’s really coming up soon so the clock is ticking. Meanwhile, Disney is doing their best in alerting guests that this is indeed coming. Merchandise already fills the neighboring shops while The Collector’s flag flies high in front of the structure, a far cry from the classic Hollywood Tower Hotel. Even though the ride is sure to thrill, the appearance will take some serious getting used to.

Over in Tomorrowland, Autopia, one of the park’s oldest attractions received additional scenes courtesy of Honda. Their robot, ASIMO used to frequent the Innoventions building next door in a fun presentation showcasing his ability to walk up stairs, but now he appears in static vignettes along the way. Gone are older references to previous Autopia cars and billboards from the Chevron days.

Joining ASIMO in the scenes is a new character named BIRD. We’re made aware of his prescence in the LED screen while we wait in a series titled “The Adventures of Robot and Bird”. ASIMO, aka “Robot” and Bird show snapshots of their road trips and travels together. Some hidden Disney gags can be spotted, and I’m sure there’s more but I didn’t stick around long enough to see it all. Robot and Bird also watch older Tomorrowland favorites that used to frequent the screen, but gone now are the classic Tomorrowland tunes from yesteryear. Instead, we’re listening to futuristic rock.

Here’s a few of the scenes along the way. It’s a shame there isn’t any movement to them.

EGGSTRAVAGANZA
Spring time at Disneyland means there’s Easter Eggs to be found! The annual scavenger hunt allows guests to scour the parks (and Downtown Disney) for hidden character eggs for their chance to obtain this year’s assortment of eggs that include the characters of Mickey & Minnie, Woody & Jessie, Lady & The Tramp, Dory & Nemo, and many more. The kicker this year were the unannounced Star Wars egg set that were $9.99 for the pair of Darth Vader and R2-D2. Limited to 1,500 pieces in Disneyland alone, they didn’t last long! Standard egg hunt available while supplies last.

GLOWING A LITTLE LONGER
The nostalgia of the Main Street Electrical Parade seemed to hit a chord with guests young and old, causing Disney Executives to extend the parade through August 20, 2017. If you were hoping for a return of Paint the Night, you will have to wait the night for a bit longer.

PIRATES TURNS 50
Walt Disney’s original Pirates of the Caribbean turned the big 50 in March 2017 as the ride re-opened from refurbishment looking and sounding better than ever. Long time fans remain sad about the changes and additions of the movie franchise characters but the base ride remains as enduring as always.

That’s it for now, but before we leave, we recommend the Lemon Rose Cake at the Beauty and the Beast themed Red Rose Taverne in Fantasyland. We certainly prefer it over the Grey Stuff.