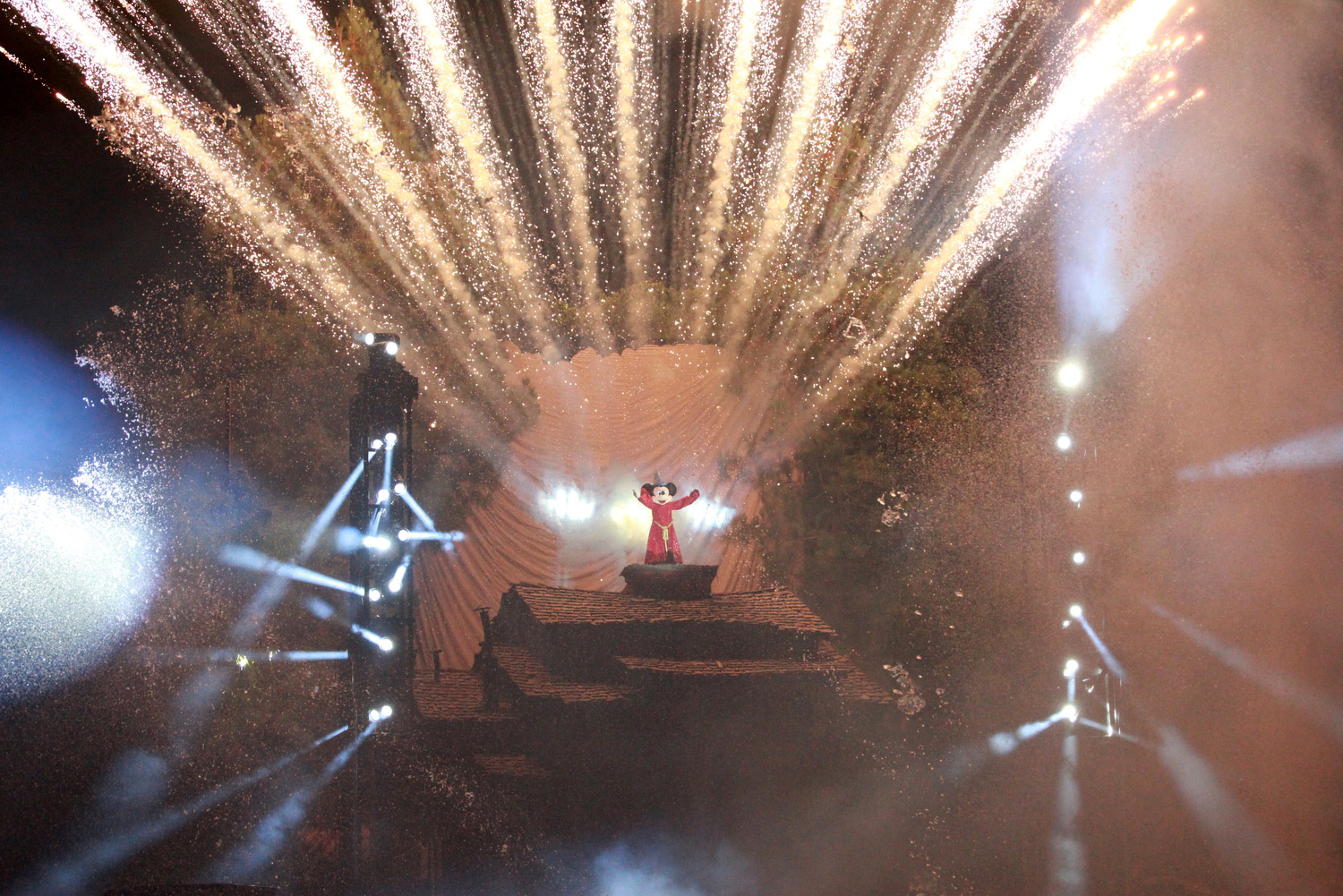 Fantasmic! is by and far one of Disney Park’s greatest shows ever made. Created in perfect symphony for its location on Tom Sawyer Island (now Pirate’s Lair on Tom Sawyer Island), the show would never be outdone, even by Walt Disney World’s version. The 25 year old show has received numerous upgrades over the years since 1992 and it has lost a float or a feature or two, but it has impressively remained the same basic show and is still beloved and cherished as ever. After a 1-year hiatus, Fantasmic! has returned in time for Disneyland’s 62nd Anniversary but it won’t be as you remembered it. The show relaunched with several changes – the most notable being the projection mapping technology and brighter and more impressive water effects. There’s brand new scenes too featuring films such as Tangled, Pirates of the Caribbean, Aladdin, and The Lion King, which also means some old favorites had to sadly go. The show remains one of Disneyland Resort’s best shows, but how well do the new scenes fit in?

To start, the show has never looked better! The colorful new graphics projected onto the stage is brilliantly eye-popping and the water projections completely updated. With all the new technological advances, the island comes to life in a brand new way. I wish I can end my review there because the rest of the changes I’m just not in love with, and like most things, I’m probably in the minority. The classic symphonic sound is still present but the entire show has been refreshed with a few additional musical layers that really muddle the main melodies. Our main star Mickey Mouse now stammers his way through the entire show, interrupting the beautiful score and visuals throughout. It wouldn’t be so bad if he wasn’t “oohing” and “aahing” every second he’s on the stage. Also gone is the amazing percussive sounds during The Jungle Book featuring Kaa the snake. Kaa and King Louie are still there but musically it’s a segment that’s more The Lion King than The Jungle Book.

Oddly enough, Pink Elephants on Parade from Dumbo remain, but it’s a new arrangement that wasn’t needed. The worst offender, however may be the replacement of Peter Pan with Pirates of the Caribbean. I understand that the franchise is well loved (even by me) but from a creative standpoint, the entire scene isn’t nearly as charming or fun as Peter Pan. Hans Zimmer’s score also doesn’t quite fit into the musical sounds of classic Disney animated hits.

Another new entry is Aladdin, featured twice in this new show. The Genie shows up first singing “Friend Like Me” and then later with “A Whole New World”, both songs featured in World of Color next door.

Now, we all love Tangled and “I See the Light”but to include her and Flynn Rider, we lose Snow White and the Prince. In the original show, it was the Snow White’s “Someday my Prince Will Come” medley that leads into the Magic Mirror and the Evil Queen but now that transition is lost. I would have preferred we lose The Little Mermaid but Ariel is as popular as ever.

Another favorite gone is the Evil Queen transitioning into the Old Hag. From there, the rest of the show is more or less the same as it always was, but with perhaps less fireworks at the end. Maleficent still becomes a fire breathing dragon and the Mark Twain Riverboat still emerges filled with many of your favorite Disney Characters.

If I sound disappointed, I am. And it’s not that I’m against updating scenes but only when there’s a strong creative reason to do so. I love every film and song that they added.. It just wasn’t the right choice to do so. Musically, the original show cannot be beat, from the arrangement and the vocal performances, it is as perfect as it gets. Fantasmic: The Special Edition, as I will refer to it is still a brilliant spectacle of a show. It’s still entertaining and fun and a fantastic way to end the night but I’m only saddened because the new scenes don’t make Fantasmic a better show… Just a more recognizable one.

David Yeh
A long time fan of both Disney and Star Wars, he has a hard time resisting the temptations of Disney’s merchandising force. If you see pictures of the toys and pins, you can bet they are from Dave, our resident collecting guru.
Read more from David Yeh
Tags: Fantasmic!
Loading Comments...