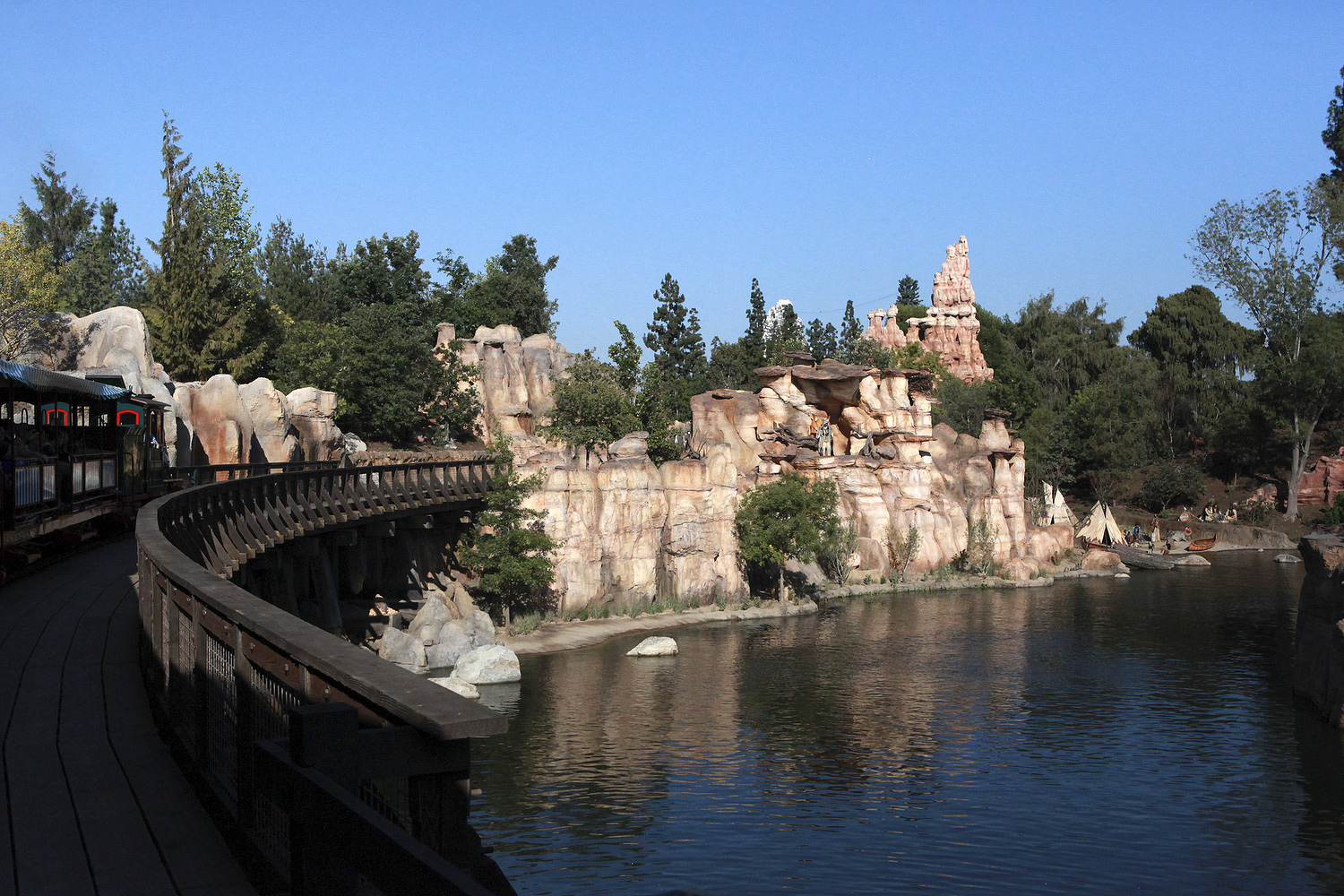 If the beginning of Summer at the Disneyland Resort belonged to Marvel’s presence at Disney Adventure with the addition of Guardians of the Galaxy – Mission: BREAKOUT!, the end of Summer is all about the return of the classics at the original Disneyland. Classic attractions like the Disneyland Railroad, Mark Twain Riverboat, Sailing Ship Columbia, and Davy Crockett’s Explorer Canoes all returned to regular operation on July 29th after a lengthy closure. That closure also shut down the Rafts to Pirates Lair on Tom Sawyer Island and Fantasmic! in order to make a new footprint to accommodate Star Wars: Galaxy’s Edge, the new land themed to Star Wars located just to the north of Frontierland.

It was certainly a challenge for visitors to not enjoy the simple luxuries that the Disneyland Railroad or the Mark Twain provided, but now it should be smooth sailing (and railing) from here until 2019, as all of the construction that’s left is behind Jurassic Park-sized gates. But let’s take a look at the return of the classics in today’s Disneyland Photo Update!

Disneyland Railroad
Lines got pretty lengthy for the Railroad on Main Street, USA, but it’s also probably the line that moves the most people. You can always try your luck at New Orleans Square, Mickey’s Toon Town, or Tomorrowland stations, but for the most part people are doing the Grand Circle Tour from Main Street Station, at least for now. While the lines for the railroad ballooned, lines for Guardians of the Galaxy has gotten to a more reasonable 60 minute wait most of the day.

There is a new narration that some may like and some may not. The previous track narration was a comfortable westerner throughout the journey, matching the timeframe of how someone may have talked during the age of railroads. The current narration is more classic, and undeniably neutral. While there isn’t anything wrong with it per se, it does lack the charm and personality of the previous version. Along your journey you will encounter some wild life, like this kitty. You won’t be able to see it after dark.

The biggest changes to the railroad is along the Rivers of America in a new scene recreating the scenic Columbia Gorge. Five new waterfalls have been added to the canyon walls and many of the animals along the river’s edge have found new places to call home. The native american indian chief still waves hello, but there is one villager who is in a more questionable location. You can see the storyteller recounting the tale of how his flute was created, but gone is his audience. Here he is, talking to himself all alone at the top of a mountain. I don’t think I would mind it so much if he had maybe one or two to listen to his tale, but having absolutely no one is a bit jarring.

Also new to the Disneyland Railroad is a left turn! The reason behind this is due to Star Wars: Galaxy’s Edge taking up valuable Frontierland real estate. The Rivers of America as well as the path of the railroad had to be reduced in order to accommodate the space requirements. There’s a few new details and critters added to the route and all in all, still a very relaxing and enjoyable experience.

The Grand Canyon Diorama and Primeval World (between Tomorrowland and Main Street USA) is still perfectly intact with a few additional effects added, such as flying birds in the distance, lightning, rainbows, and even an erupting volcano that ends your grand circle tour around Disneyland.

Entrances at the Edge of Galaxy’s Edge
There are three gateways to Star Wars: Galaxy’s Edge at Disneyland, while the East Coast version will only have two. From right to left, the entrances are in Frontierland (close to Fantasyland), Frontierland, and Critter Country. You can walk up to each of these gateways now, but there’s nothing more to see beyond that. Still, one can’t help but feel a sense of excitement when approaching these new gateways.

The first gate is closest to Fantasyland while technically still in Frontierland. A red wagon is propped nearby, with the words “Wilderness Expeditions and Delivery Service”, with the letters WED an obvious nod to founder Walter Elias Disney or it could be a nod to WED Enterprises, an earlier name of Walt Disney Imagineering.

On the wagon is a shipment to Jason Chandler, and if you’re wondering who he is, many wonder the same. He’s a creation of Imagineer Tony Baxter in the 1970s, a character who had a major part in Big Thunder Mountain Railroad but later removed from it. Later, his storyline added him to the Society of Explorers and Adventurers, or S.E.A., a common thread that ties many of the Disney parks’ attractions together.

Near the 2nd entrance to Galaxy’s Edge is a Frontierland Postmaster’s Office where you’ll find new messages with some nods to Disneyland lore old and new. The Rattlesnake flier is certainly an homage to Woody from Toy Story’s famous saying “There’s a snake in my boot!”. Does anyone know the significance to Lady Goldenhair and The Long Island Kid?

Above the Postmaster’s Office is a delivery for Barnabas T. Bullion, the magnate who rules the Big Thunder Mining Company and bares a striking resemblance to Imagineer Tony Baxter. From Disney’s official cannon: “Barnabas T. Bullion is the founder and president of the Big Thunder Mining Company. The longtime mining magnate comes from a powerful East Coast family and considers gold to be his very birthright by virtue of his oddly appropriate name; in fact, he considers the ultimate gold strike to be his destiny. And that is why he is having so much trouble with Big Thunder Mountain. According to superstitious locals, Big Thunder Mountain is very protective of the gold it holds within, and the unfortunate soul who attempts to mine its riches is destined to fail. And so far that prophecy is coming to pass. The mine has been plagued by mysterious forces and natural disasters ever since. And yet the Big Thunder Mining Co. is still in operation. In fact, Bullion is discovering new veins of gold and digging new shafts every day, offering a closer look at the Big Thunder mining operation than ever before. But a word to the wise for anyone attempting to visit the mountain: watch out for runaway trains.”

Many letters and other details link him to the above Jason Chandler as well as making him a member of the Society of Explorers and Adventurers.

Here’s a closer look at the 2nd entrance to Galaxy’s Edge in the heart of Frontierland. The Disneyland Railroad can be seen overhead from time to time. 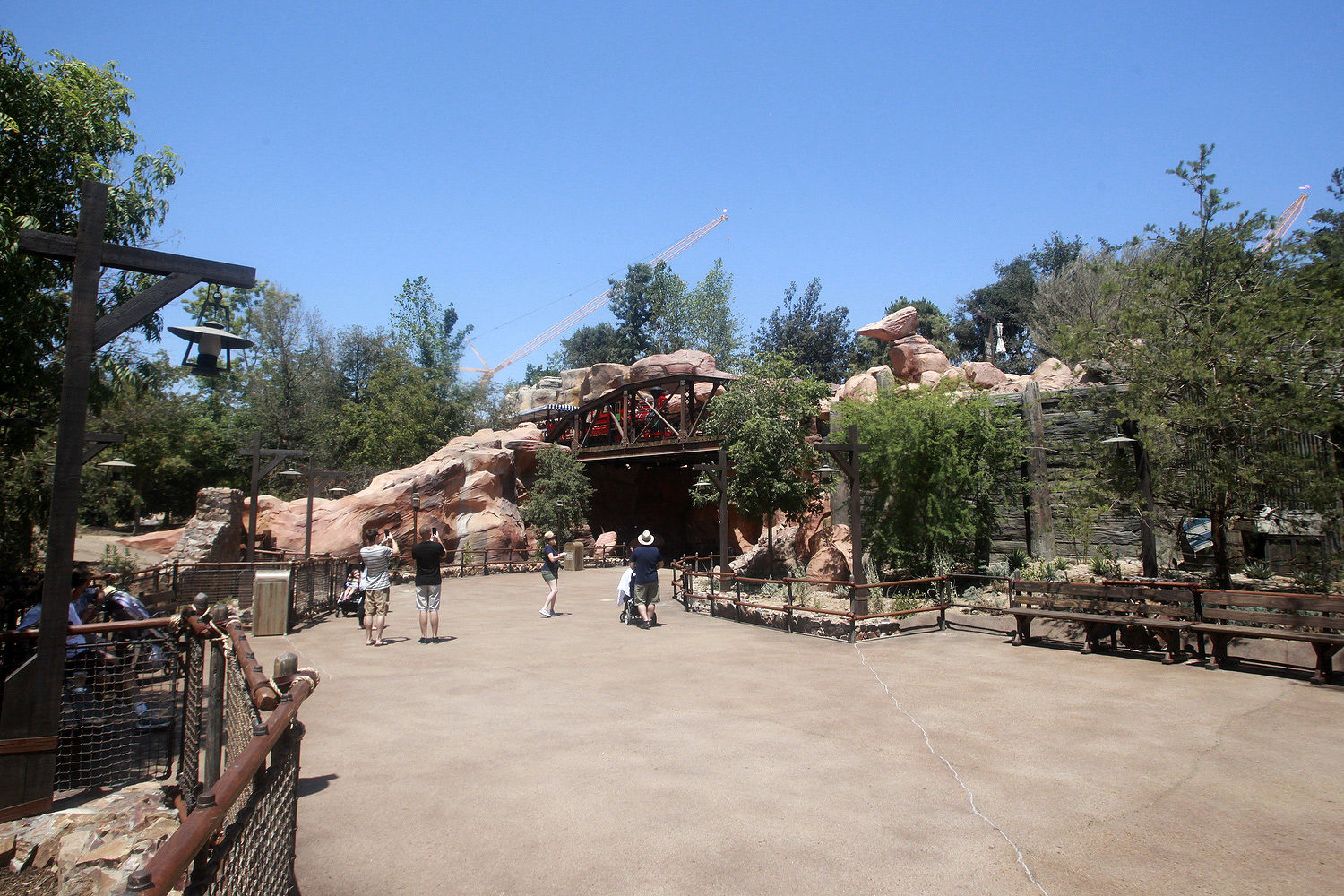 The third and final entrance to Galaxy’s Edge can be found in Critter Country near Hungry Bear Restaurant. When the land opens for the first time in 2019, Critter Country will no longer be a dead-end!

Progress in Galaxy’s Edge
With the announcements made at D23 Expo that Disneyland’s Star Wars themed land will open first, here’s the latest on the construction of the land. These large structures have a long way to go before becoming the 14-acre fully immersive land.

Rivers of America
The Mark Twain Riverboat, Sailing Ship Columbia, and Davy Crockett Explorer Canoes make Disneyland’s Rivers of America quite the busy place! And along with the Rafts to Tom Sawyer Island, I wouldn’t want it any other way! Despite the lack of thrills, there’s something elegant and timeless about this section of the park but let’s take a closer look at the many changes to the shortened Rivers of America.

The Mark Twain also sports a new narration, one that does draw too much attention to the new scenery. A bit too heavy handed for my tastes but most guests won’t notice and simply enjoy the view.

Cranes still rise high into the sky and will be there for quite a while longer. Hopefully the plant life will continue to grow and flesh out this part of the river as well. Right now it feels just a tad young and new.

Critters and native americans can still be found bordering the river banks, and across the way, Mike Fink has a cabin home with a parked Keelboat not far away. Mike Fink Keelboats used to be another busy part of the river ways but has since retired.

The new rockwork and waterfalls now put the Disneyland Railroad front and center, but you might think twice about riding the Railroad again after seeing this scary beaver munching down the bridge foundation!

The old American Eagle has found a new place for its nest. A location within ear shot of the Native American Indian going on about his flute the entire day.

The boy and his dog can still be found fishing, but much closer to the village.

The rest of the village can be found performing their usual tasks but in addition, now wondering when grandpa will come down from the top of the mountain.

Still, much of Star Wars: Galaxy’s Edge is quite visible from the bottom of the river bank. Perhaps new rockwork will seamlessly blend the two lands together in the coming years.

And that just about does it from this photo update! Thanks for reading and we’ll see you in the parks!

David Yeh
A long time fan of both Disney and Star Wars, he has a hard time resisting the temptations of Disney’s merchandising force. If you see pictures of the toys and pins, you can bet they are from Dave, our resident collecting guru.
Read more from David Yeh
Tags: Disneyland, Star Wars Galaxy’s Edge, construction
Loading Comments...