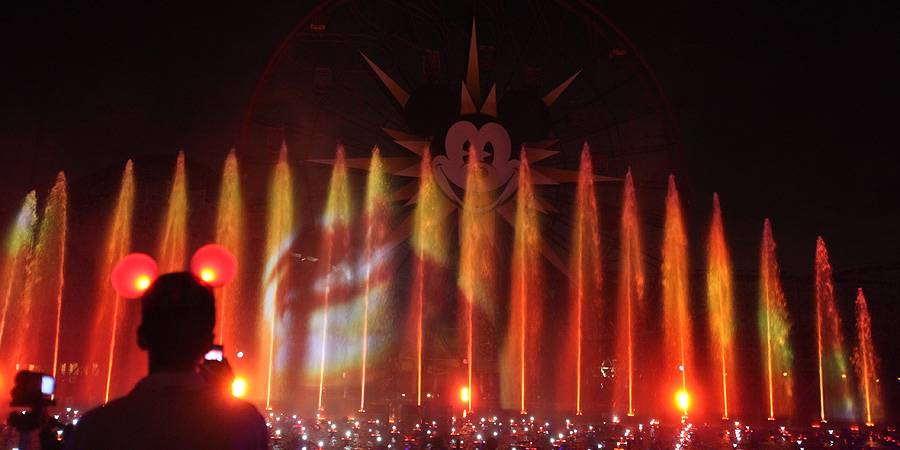 Disney introduced to the media brand new “Glow with the Show” Mickey Ear Hats this past week.  Running about $25 to purchase, these ear hats feature light up ears, perfect for night time use.  But that’s not all!  These hats feature infrared trigger technology that will compliment key moments in both World of Color and Mad T Party.  The hat certainly adds to the spectacle of World of Color, but its entirely dependent on whether or not the crowd you’re with buys into it too!  Read on for more details and photography, including a few from the all new segment featuring Merida from Disney-Pixar’s Brave.

Illustration of the hat © Disney

ANAHEIM, Calif. — Guests of the Disneyland Resort will light the night thanks to new Glow with the Show Ear Hats that change colors in sync with shows at Disney California Adventure Park.

Starting June 15, fun interactive versions of the famous Mickey Ear hats will incorporate the latest, infrared trigger technology to engage the audience during “World of Color” and Mad T Party.  The Ear hats feature iridescent lights that change to complement the imagery and beat of the shows.  When not activated by the shows, more surprises are in store for guests as the magical ears glow with other settings around Disney California Adventure Park.

The Glow with the Show Ear hats add one more layer of fun to the grand reopening of Disney California Adventure Park with the premieres of two, highly anticipated themed lands, Cars Land and Buena Vista Street.  These exciting new lands highlight a five-year expansion that has brought more than 20 new attractions, shows and experiences to the Disneyland Resort, along with expansion and renovations at the three Disneyland Resort hotels.

“Glow with the Show Ear hats let our guests become part of the color of our magical “World of Color” at The Paradise Pier lagoon,” said Steve Davison, Creative Entertainment Vice President of Parades and Spectaculars.  “Embedded pixels allow the Ears to dance and play along with each musical sequence.  It truly brings the show’s environment out of the lagoon and into the audience in an amazing and dazzling new way.”

for more than 55 years, the classic, black Mickey Mouse eat hat has been a Disney Parks guest favorite.  Across the decades, there have been more than 200 different ear hats including limited edition and novelty editions.  Using new interactive technology, the new ears change to complement and harmonize with the magic surrounding guests.

Since Disneyland Park opened in 1955, guests have purchased more than 85 million Mickey Ear hats.  They are one of many popular items offered by Disney Theme Park Merchandise.

David Yeh
A long time fan of both Disney and Star Wars, he has a hard time resisting the temptations of Disney’s merchandising force. If you see pictures of the toys and pins, you can bet they are from Dave, our resident collecting guru.
Read more from David Yeh
Tags: World of Color, Mad T Party, Glow with the Show, Mickey Ear hats, Steve Davison
Loading Comments...