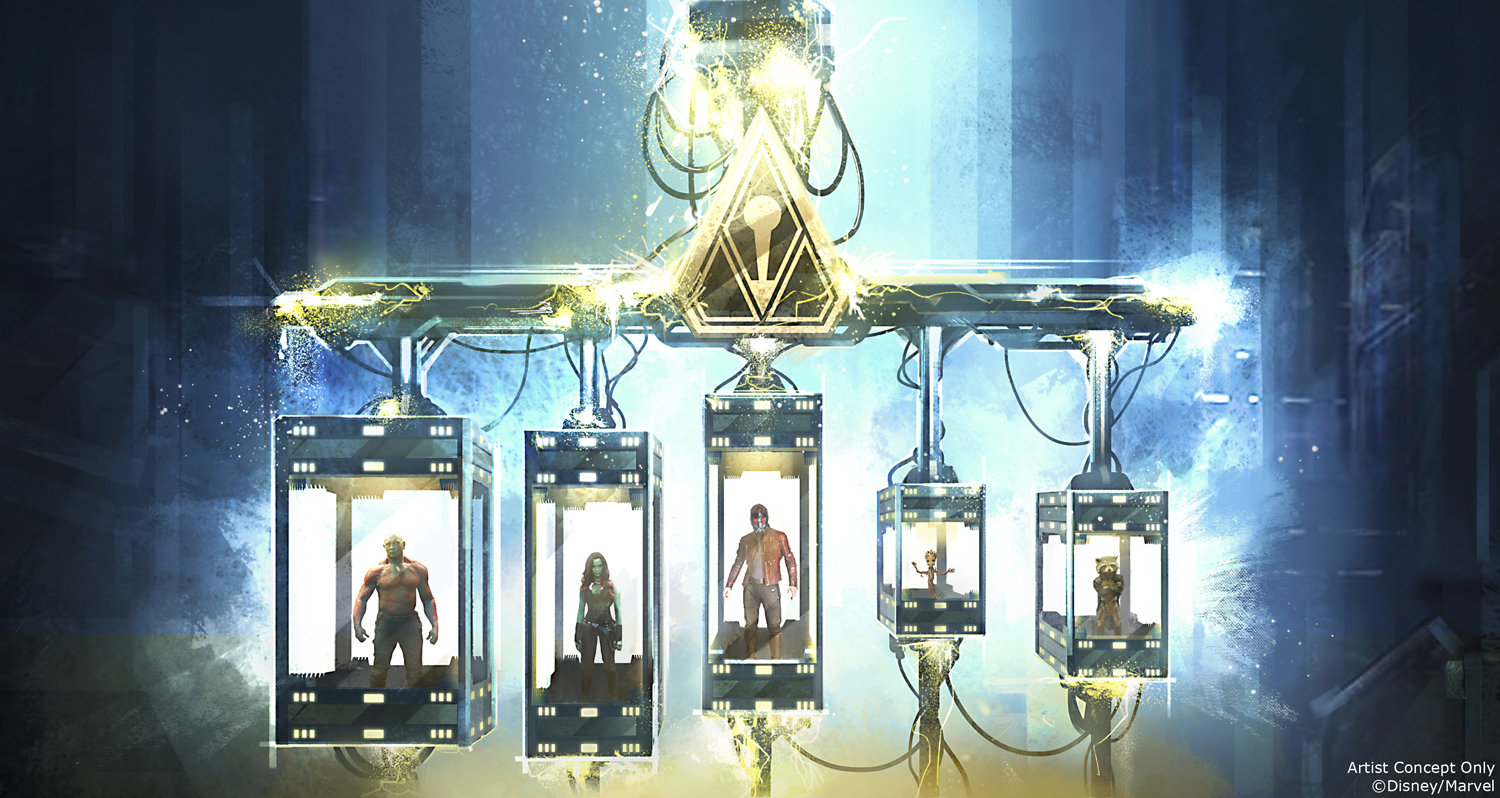 Brian Curran
Marvel: California Breaks Out of the Twilight Zone
By David Yeh

For months, unofficial Disney blogs and fan sites have speculated and spread rumors of a Guardians of the Galaxy takeover of California Adventure’s Twilight Zone Tower of Terror. Disney denied it, but at San Diego Comic-Con’s Marvel panel in Hall H, it was officially announced. Here is Walt Disney Imagineer Joe Rohde with some details of the new attraction:

https://youtu.be/9L9ZAdtNZc0
Twilight Zone Tower of Terror opened in Disney California Adventure in 2004 but is set to end its elevator services at the end of this year and reopening as GUARDIANS OF THE GALAXY MISSION: BREAKOUT! In time for the sequel release Summer of 2017.

The decision is sure to upset the legion of fans of the ride, as the classic haunted elevator paired with Rod Serling (uncannily voiced by Mark Silverman) has struck a chord with park goers. But not only that, it gave an actual reason (at the time) to visit Hollywood Land (then Hollywood Pictures Backlot) as an E-Ticket that actually fit the theme of the land as well as the theme of the park. Tying Guardians of the Galaxy to California is more of a stretch, with what Joe Rohde describes as a “warehouse, fortress, power plant”. The tallest structure in California Adventure will no longer be a Hollywood Tower Hotel, but an outer space power plant – meaning the theme wouldn’t quite fall under a “California” Adventure let alone an “Earth” Adventure park.

But there is a bit of a silver lining at the end of it: Disneyland will be the first state-side resort to host a Marvel ride following Hong Kong Disneyland, which will soon open up the Iron Man Experience later this year, and the superior version of Twilight Zone Tower of Terror can still be found at Disney’s Hollywood Studios in Orlando.

What do you think of the changes? Do you welcome our new Guardians overlords?

Read the press release below:

SAN DIEGO, Calif. (July 23, 2016) – The Guardians of the Galaxy are coming to the Disneyland Resort in Anaheim.

Beginning summer 2017, guests at Disney California Adventure Park will join in a daring confrontation with one of the most unusual characters in the park’s history: Tanaleer Tivan, the Collector. He has opened his unique collection of fauna, relics and species to guests for a special tour culminating with his latest prized possessions: the Guardians of the Galaxy, themselves! Fortunately, Rocket has a plan to free his friends­ – and that plan includes recruiting Disneyland Resort guests in a sensational rescue effort.

This comically cosmic, rocking new adventure, Guardians of the Galaxy – Mission: BREAKOUT! is the result of a collaboration between the creative minds behind the comic books, the films and Walt Disney Imagineering. The attraction will drop guests directly into the story alongside characters from the comic books and the blockbuster films.

Joe Rohde, Portfolio Creative Director, Walt Disney Imagineering, is leading the project. He shared this preview of the new attraction: “The setting is a kind of fortress that’s owned by the mysterious Collector and it’s packed with creatures and his latest acquisitions from across the universe. Now he has imprisoned the Guardians of the Galaxy and they’re hanging in display cases over a giant abyss. The captor doesn’t know it but Rocket Raccoon has escaped and is enlisting our aid—all the guests—to help the Guardians in a breakout scheme. And the rest is comical chaos; a very funny, very irreverent story and a really wonderful addition to Disney California Adventure.”

“It’s such a thrill to be working alongside a true visionary like Joe Rohde and the entire Walt Disney Imagineering team,” said Joe Quesada, Chief Creative Officer, Marvel. “Like our stories and characters, projects led by Joe are the stuff of legend, so Marvel fans rejoice! The universe couldn’t be in better hands! Guardians of the Galaxy – Mission: BREAKOUT! is going to be an out of this world experience and what has me even more excited are Joe’s ‘secret’ plans for the future. We’re just getting warmed up.”

The announcement was made today at San Diego Comic-Con by Kevin Feige, President of Marvel Studios, who said: “The incredibly talented Disney Imagineering team has found a way to harness the spirit which drove Guardians of the Galaxy’s success to create this immersive experience. With its debut timed to the release of the film’s sequel, we are eager to present the attraction to the millions who visit Disney California Adventure and place them in the center of the action as they join in a mission alongside our audacious Guardians of the Galaxy team.”

Guardians of the Galaxy – Mission: BREAKOUT! takes place in the fortress-like museum of the mysterious Collector, who has trapped his newest acquisitions, the Guardians of the Galaxy. One member of the group, the intrepid Rocket, has escaped, and he calls upon brave visitors for help. Guests board a gantry lift which launches them into a daring adventure as they join Rocket in an attempt to set free his fellow Guardians.

The new attraction will anchor a broader universe of Super Heroes that will grow over time in Disney California Adventure Park. Guardians of the Galaxy – Mission: BREAKOUT! will transform the structure currently housing The Twilight Zone Tower of Terror™ into an epic new adventure, enhancing the breathtaking free fall sensation with new visual and audio effects to create a variety of ride experiences. Guests will experience multiple, random and unique ride profiles in which the rise and fall of the gantry lift rocks to the beat of music inspired by the film’s popular soundtrack.

Fans of The Twilight Zone Tower of Terror will want to experience the attraction from now until its final “drop day,” which will be celebrated in true Disney fashion in early January.

The Twilight Zone® is a registered trademark of CBS, Inc. and is used with permission pursuant to a license from CBS, Inc.

David Yeh
A long time fan of both Disney and Star Wars, he has a hard time resisting the temptations of Disney’s merchandising force. If you see pictures of the toys and pins, you can bet they are from Dave, our resident collecting guru.
Read more from David Yeh
Tags: Guardians of the Galaxy, The Twilight Zone, The Twilight Zone Tower of Terror
Loading Comments...