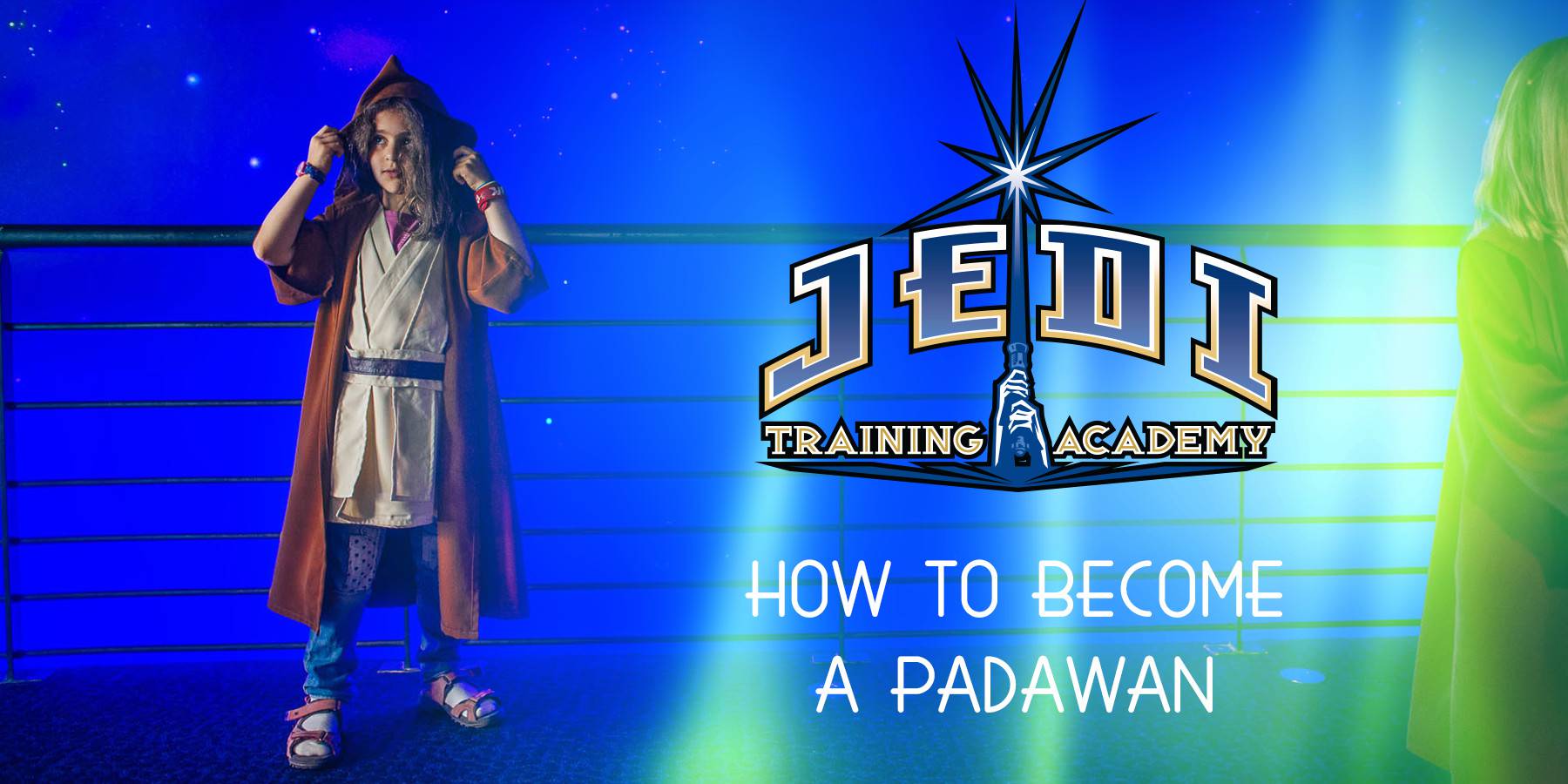 Isn’t it a dream of all children to become a Jedi knight? We have all waved sticks around pretending that they’re lightsabers, making the signature noises with our mouths. Even young Obi-Wan himself, Ewan McGregor made lightsaber noises himself during production of the prequels until they asked him to stop. Luckily for children aged seven to twelve, you don’t have to hope to be cast in a new Star Wars project. Just head down to Disneyland Paris and head to the Arcade Alpha at the Videopolis theatre. Cast Members will write down your name and tell you and fifteen others to report back 45 minutes before the the assigned show.

So, what happens to a padawan when enlisting for the Jedi Training Academy? EndorExpress takes you on an exclusive behind the scenes look.

The sixteen padawans-to-be and their family are waiting in a roped-off outdoor queue just outside the Alpha Arcade. The doors open, and a couple of Cast Members of the Spectacles Department guide them in one by one. Each participating guest is given a Jedi outfit, consisting of an inner tunic with the two sashes and a sewn-on belt and an overhanging robe. (it all attaches together with snaps). There are two available sizes. Fun fact: each tunic is labelled as ‘Robe Enfant Padawan’.

As soon as they enter the Arcade, they will see sixteen marked spots on the ground, and a mysterious crate.

Each padawan is instructed to choose and stand on one of those spots, while the family has time to take plenty of pictures. As soon as the final padawan has taken his or her place, two Jedi Knights enter the Arcade.

With a voice booming of authority, the knights welcome everybody in two languages and immediately ask the parents to stand back against the wall to have as much available space as possible. The padawans are asked to line up at the railing around the crate, and are asked which languages they speak and understand. With the diversity of the visitors in Disneyland Paris it’s normal for guests to speak English, French, Spanish, Italian, German and Dutch. Depending on the language the group will then be split up into two. Where possible, the Jedi Knights will communicatie with the children in their native tongues, if not, they will ask a parent to do the necessary translations.

When the groups have been split up, each padawan will be placed on the marked spots again.

Are you ready to become a Jedi?

The Knights both walk to the big unmarked crate, and open it up. Inside are twenty identical swords. These brand new ones are nearly identical to the ones sold in the shop, with just a different activating mechanism.

One by one they are being handed a new saber, which no-one can resist waving around the second they get it. After a brief explanation on which button to push, they will all together activate it at the command of the Jedi Knights. Green glow and lightsaber noises will fill the Arcade, together with a big smile and a look of awe.

Lightsaber at the height of your chest.

Activating and deactivating the lightsaber are being trained, which will provide a magical moment in the show. If there are any misbehaving sabers, they will be replaced by the few spares in the crate.

To the left! A gauche! To the right! A droite!

With a few simple commands, the basics of holding and using a lightsaber safely are explained with basic swings. After the two basic swings, they will learn to duck to the ground, stand and give a hit to the top.

As soon as everyone knows the drill, they show it one more time as one padawan does a quick one-on-one ‘duel’ with the Jedi Knight, doing the moves they just learned.

After that, children will be swapped between groups depending on their heights. With their family being seated in the reserved seats, the padawans then leave to the theatre where they will wait at the opposite sides of the control boot, ready to be called on stage by the Jedi Master himself.

Photography by Kris Van de Sande, additional photography by Jasper Orens. Thanks to Disneyland Paris and The Walt Disney Company Belgium for making the features on the Jedi Training Academy happen.