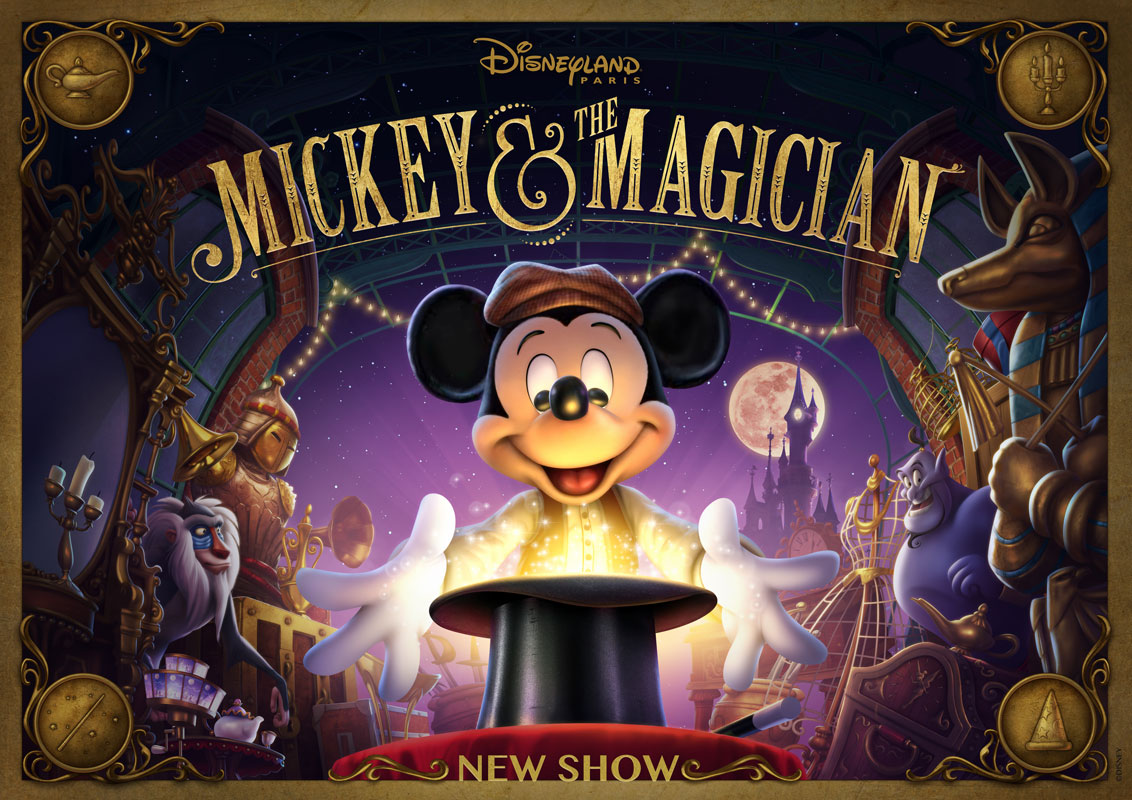 Disney just sent out some brand new information about Mickey and the Magician, the new show at Disneyland Paris!

Entertainment just keeps on creating new surprises at Disneyland Paris®. This summer, the public will be able to enjoy “Mickey and the Magician” for the first time. This show, specially created for Walt Disney Studios® Park, will star the mouse who started it all.

Mickey is poised to become the hero of a brand new story. Far from his recent roles of master of ceremonies, this new show will take him back to where Disney magic all began. He is embarking on a unique experience where magic fuels dreams. Mickey will learn valuable lessons from iconic Disney Magicians leading him to his dream of becoming a Magician. But these lessons are full of surprises, because, although enthusiastic by nature, Mickey is terribly clumsy.

A new adventure for Mickey

Go back in time to Paris at the turn of the 19th century… and enter a great Magician’s atelier, where the assistant is no other than a certain Mickey Mouse! Night has fallen. Tinker Bell has spread a little stardust. When he is given the task of cleaning up the atelier before sunrise, the young apprentice gets distracted! Nothing turns out as expected. Mickey finds himself accidentally transported to the most magical Disney film worlds. He becomes the hero in this incredible show where illusion is key and the audience find themselves plunged into a world of magic and delight.

To illustrate this return to where the magic all began, the creators of “Mickey and the Magician” draw inspiration from the great illusionist Georges Méliès and the famous magician Robert-Houdin. This is not a traditional magic show. The illusions will form the basis of this brand new story. Disneyland Paris has called on the acclaimed magician Paul Kieve to create these illusions.   “It’s hard to think of the word ‘Disney’ without also thinking of the word ‘Magic’. I became fascinated with magic when I was 10 years old and was always inventing ideas in my head. One of the great things about working on ‘Mickey and the Magician’ is that I can bring some of these ideas into reality!” said Paul Kieve.

“When I was 10 years old I was taken to Disneyland in California. Magic of course became my life, so to have the opportunity to bring wonderful magic into a permanent live show in Disneyland Paris, surrounded by these classic Disney characters is a dream come true for me. I’m excited that thousands and thousands of kids of all ages will be introduced not only to live magic, but to high quality live theatre by watching Mickey and the Magician. I hope it will be an experience they will never forget.”

Stars from Cinderella, Beauty and the Beast, The Lion King, Aladdin and Frozen all lend a hand

Every object has a story and the Magician’s secret attic is cluttered with amazing artefacts, curious props, and mysterious objects: a hat, a candlestick, a zoetrope, a lamp and a crystal ball among other things. Distracted from his task, Mickey stirs the magic within each object. He then embarks upon an extraordinary journey strewn with breath-taking illusions magical moments, and crosses paths with iconic Disney magicians.

The Fairy Godmother from Cinderella unveils her famous spell, Bibbidi Bobbidi Boo. Rafiki, the mandrill and great mystic from The Lion King will remind him of the meaning of “The Circle of Life”. The Genie from Aladdin performs an eccentric number for him to the tune of the famous song “Friend Like Me”. Lumière, the French candlestick from Beauty and the Beast has a surprise in store for him with his new enchanted version of “Be Our Guest”. Finally, Elsa, from Frozen, will show him how to…”Let It Go”!

He will learn from each in turn as they share amazing magical moments with him, to help him discover the true meaning of the word “magic”.

The magic of the music

The unforgettable songs that helped to make each of these major films such a success have been specially reorchestrated. “Mickey and the Magician” promises the audience great music featuring completely unexpected sounds. For example, “Be Our Guest”, the star song from Beauty and the Beast, will feature the sounds of the circus; while “Friend Like Me”, sung by the Genie from Aladdin, takes on a Broadway style, integrating tricks and tap dancing. The show also features a brand new song.

A new daily show at the Walt Disney Studios® Park

“Mickey and the Magician” will make its debut on 2 July 2016 and will run until 8 January 2017. There will be several Franco-English shows per day at Animagique® Theater, Toon Studio®, Walt Disney Studios® Park.

“Mickey and the Magician” sees Mickey take on a different role and gives the audience another opportunity to see the stars of Cinderella, Beauty and the Beast, The Lion King, Aladdin and even Frozen come to life on stage. A funny, musical, mischievous and moving show… full of illusions! Bibbidi Bobbidi Boo!