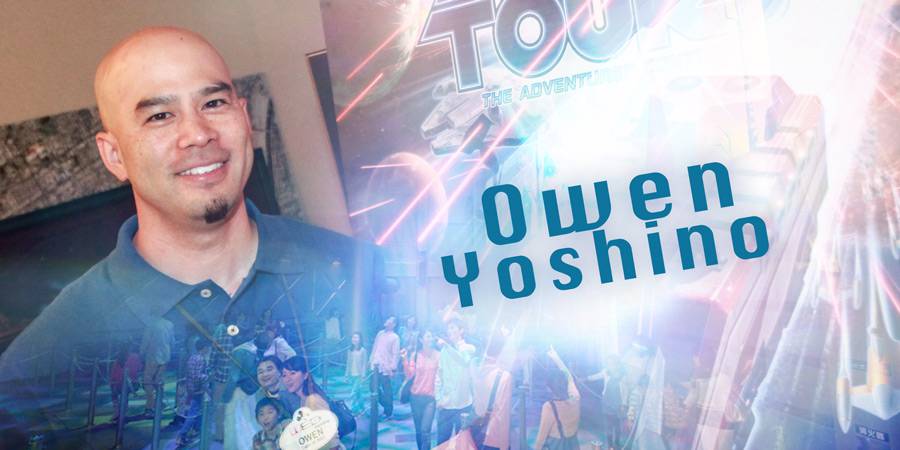 Star Tours: The Adventures Continue is popping up in Disney Resorts around the galaxy with the latest stop at the Tokyo Disney Resort in Tokyo, Japan. But with each installation, there isn’t a simple way to replicate what came before it. Each space port is unique to its location and in Japan, it’s one of the biggest Star Tours there is!

With so much more queue to see and hear, we wanted to learn more about the creation of the Star Tours attraction in Japan. Here today is a conversation we had with Owen Yoshino, Creative Director at Walt Disney Imagineering…

EE: Owen, tell us about your role at Walt Disney Imagineering.

Owen: I’m the Creative Director at WDI and I focus solely on the Tokyo Disney Resort portfolio.

EE: How long have you been an Imagineer?

Owen: I’ve been with Disney since 1993, starting as an intern. There was a program called ImagiNations and it was the second year that they had the program. I entered with two of my friends; I was the artist and we had an architect and a mechanical engineer. We won second place, which granted us an internship, and I’ve been working here pretty consistently since. I left for a couple of years to work on video games at Sega but I’m back. It’s been great.

EE: Wow that’s great! What did you study in college?

Owen: My major was graphic design. Initially when I started at WDI, I was in the graphics department doing signage, a lot of collateral, logos and stuff. When I was at Sega I was doing concept design for proprietary attractions for Sega Game Works, virtual reality and what not. When I came back to WDI, I was the Show Designer for rides and attractions and slowly worked my way into being creative director.

EE: It sounds like a dream come true to be at a company that has so many great projects. Were you a Disney fan growing up?

Owen: I was a fan of classic Disney movies but I didn’t know anything about Imagineering until I entered the competition. The competition was great because being from Hawaii, Marty Sklar had come up with this ImagiNations program and it targeted schools with a high minority count to diversify the work force. So Hawaii, being a real melting pot of primarily Asian cultures was one of the candidates. Back then I just wanted to graduate from college so it was great that this program came along. Things luckily fell into place.

EE: Let’s talk Star Tours…. And Tokyo. Where do you start on a project like this?

Owen: I worked briefly in the concept phase early on. This was the “Blue Sky” phase [creative concept] for the one in Anaheim but I wasn’t fully involved. What’s fantastic about the Tokyo portfolio and the work that I’ve been doing there, is that I was able to work on the blue sky with the ideas all the way into completion and implementation of it at the site. It was fantastic to work with an incredible team from the ground up.

EE: There are quite a few differences in Tokyo… can you elaborate on that?

Owen: In Anaheim, Star Tours was built where an existing attraction resided… Adventure Thru Inner Space. The way that the queue runs is limited to the existing facility. But in Tokyo, they built Star Tours from the ground up so it was really extravagant. In Anaheim, we have an extended queue but it goes outdoors. In Tokyo, they have this dedicated queue that is entirely indoors, has two Starspeeders, droids, etc. The first scene was like a maintenance garage and it was quite a challenge to turn that into something between Episode 3 and 4.

It’s always a challenge when you’re working with a set budget so you have to be really smart about how you design the space and what will really stand out to the guests. The arrival hall extended queue and the post show were two areas that are absolutely unique to Tokyo. The rest of the attraction is similar but nearly two times bigger so you need to fill in those blank areas.

The Arrival Hall, much like any airport, is an area where everything is represented. You have a large screen that displays four key points within the attraction. The first, is that Star Tours is one of many carriers. In the Star Wars galaxy you have Air Alderaan, Tatooine Transit, Bespin Direct, and you have Star Tours. All of these other competing carriers are showing their travel packages on this screen.

For the second part, most of Japan isn’t as familiar with Star Wars as they are in the United States. It’s popular, but not the same so we’re reminding the guests that the Rebels are the good guys. In Japanese, if you say “Rebel”, it might sound like they’re the bad guys. So there’s a segment that displays public announcements that the Empire is looking for Rebel Spies, or advertisements that the Empire is trying to recruit, or pointing out who Luke Skywalker is, who Han Solo is.

The third part is the spaceport itself. It describes the customs area, where to get food…

And the fourth part, Sacul Industries, is the company that builds everything like the Starspeeder 1000. They also manufacture the security droids, communication devices, etc. So that story is being told. In the arrival hall we have the Starspeeder that is on display and depending on the lighting effects, it will reflect the various transport carriers like Tatooine Transit or Air Alderaan. Etc. So the arrival hall space is quite incredible because our great team was able to completely immerse the guest into the Star Wars / Star Tours galaxy. Previously when it was a maintenance garage for the original Star Tours, there were a lot of open windows and I wanted to make sure that the guests weren’t confused, so that they could put Tomorrowland aside. We closed up all the windows and had complete control over the light and acoustics. When an Empire announcement came on, everything would turn red and you got that oppressed feeling.

EE: Can you tell us more about the Post Show area and what transformation that had to go through?

Owen: That’s a really tricky thing because now with Star Tours, you don’t know where you’re going to land. If we retained the existing post show, when you landed you’d always see the same post show, which you’d see all the luggage coming out and R2-D2 is sorting through them. Unfortunately, as gratuitous as it was, guests were zipping by and not really paying attention to it. The post show was also originally open to the arrival area in the queue so when you exited the ride, you would be able to see the part of the queue that you were standing in previously, so that was a big thing for us to change because you’re supposed to be landing in a completely new planet. We walled that off and focused on the acoustics and the destination posters.

EE: So now the post show is more of a generic spaceport that could be any planet. And what happened to poor Officer Zzyzzx? Is he still around?

Owen: Right, right. As far as Officer Zzyzzx goes, he was more of a part of Astro Zone and it was a different building all together. He was telling the story of flight security and was X-raying luggage… but that’s something that is already happening in Sector 2 of the queue so we had to address that. So Officer Zzyzzx is officially on vacation right now.

EE: Oh no! Will he be placed elsewhere?

Owen: There will always be possibilities.

EE: I’ve seen photos of a certain trio of droids. What’s the story behind them?

Owen: In Tokyo there are droids that don’t exist in any other location. There were five of them, assembly droids, doing repairs on things. We were thinking of what to do with these droids that can be seen before guests get on the ride. They had minimal animation but without too much story. We talked to Howard Roffman at Lucasfilm and he said to have fun with it. We couldn’t do “Three Stooges” but we talked about doing homage to the Hitchhiking Ghosts from the Haunted Mansion so we pitched it and everybody liked the idea. So the droids will talk to each other and occasionally go into the hitchhiking pose with their luggage.

EE: Do you have a favorite destination on the ride?

Owen: I like Hoth! That really blew me away. I thought that scene was pretty incredible.

EE: Is there a previous Tokyo Disneyland attraction that you worked on that is particularly memorable to you?

Owen: I worked on Space Mountain and that was very memorable. We did something completely different than in Anaheim and Florida and it’s very Sci Fi compared to Anaheim. The story is way out there but I like it.

EE: You’re currently based out of Glendale… how often are you in Tokyo?

Owen: It all depends on the project. Most of the work is done here but when we have presentations, we’ll go to Japan and also before the attraction opens to make sure everything has that Disney quality.

Owen: Pirates of the Caribbean. It’s one of those rides that every time you ride it you find something new. As a kid, “It’s a small world”. It always resonated with me. It just takes you away.

Owen: Yeah, it’s done in such an artistic way and so positive that it really stuck with me.

EndorExpress would like to extend our sincerest thanks to Owen Yoshino for his generous time, and a special thanks to Frank Reifsnyder at WDI for his help as always!

All images other than Officer Zzyzzx were provided by Walt Disney Imagineering.