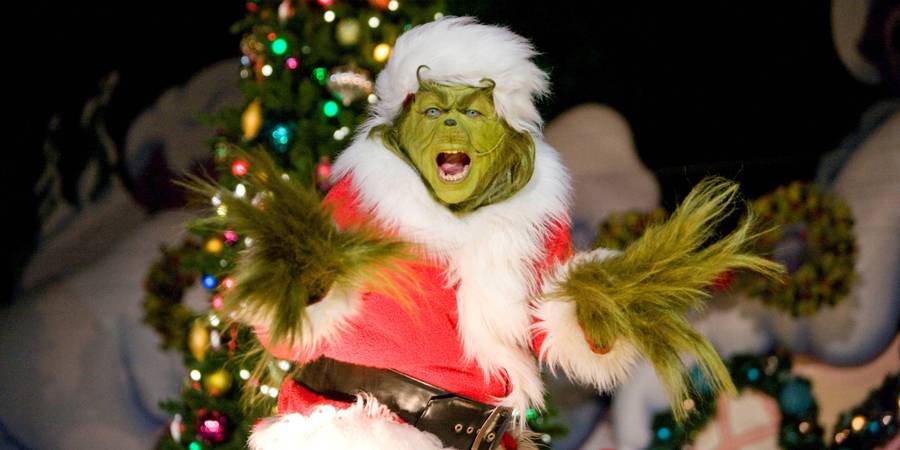 The Entertainment Capital of L.A. Rings in the Holiday Season:
Universal Studios Hollywood Cel-Who-brates with 21 Days of “Grinchmas” and Universal CityWalk Decks the Hall with Free Concerts, Nightly Snowfall and Special Appearances by Santa Claus

Universal City, California – November 24, 2015 – It’s the most wonderful time of the year as Universal Studios Hollywood and Universal CityWalk® deck the halls for a wintry calendar of cool holiday activities at The Entertainment Capital of L.A.

A very, merry “GrinchmasTM” returns to Universal Studios Hollywood as the theme park celebrates the Who-lidays with The Grinch, his faithful dog Max and a roster of Whos from the town of Who-ville.

The Universal Plaza, an elaborate grand piazza at the heart of the theme park, will serve as the backdrop for the lighting of the towering “Grinchmas” tree – a whimsical centerpiece twisting and spiraling 60 feet above visitors and providing the ideal setting for merry holiday-making memories, while The Grinch, his adorable dog Max and the Who-ville Whos entertain guests nearby with fun-filled photo opportunities.

As part of the fab-Who-lous event, Martha May Who-vier and the Who Dolls will take center stage by the “Grinchmas” tree performing energetic musical sets to usher in the Christmas season in style. The Wholiday Singers – a hip boy-band ensemble – will perform nightly a cappella concerts featuring a mix of Christmas favorites and pop rock.

The spirited “Grinchmas” event also will capture guests’ imagination with a variety of inspiring activities designed to create long-lasting memories. These include:

The spirit of “Grinchmas” also will come to life aboard the world-famous behind-the-scenes Studio Tour with engaging performances by unforgettable Who-ville Whos re-enacting popular scenes and songs from the family favorite at the original film sets from the blockbuster film, “Dr. Seuss’ How the Grinch Stole Christmas.”

“Grinchmas” is included in the price of theme park admission.  More information is available at www.UniversalStudiosHollywood.com.

The spirit of the season continues with a wintertime transformation of Universal CityWalk, beginning the day after Thanksgiving on Friday, November 27 through Friday, January 1, 2016.  A spectacular 40-foot tall Christmas tree will glisten with 200,000 LED icicles choreographed to the lights and sounds of the season in the “5 Towers” plaza. Santa Claus will make nightly appearances and offer special photo opportunities at “5 Towers” plaza while evening snow falls hourly at the heart of CityWalk. Visits from St. Nick, along with free concert performances and an eclectic ensemble of talented street performers will make CityWalk the ultimate L.A. holiday destination. Admission to Universal CityWalk is free.

Universal City, California – November 23, 2015 – During this joyful season of giving,

Universal CityWalk and NBC4 Southern California are collaborating to present the first-ever “The Wishing Tree” event, inviting the public to pay it forward by making a wish for someone deserving.

Wishes will be granted live weeknights from December 9 – 23 during the NBC4 News at 5 p.m. and 6 p.m. from Universal CityWalk with longtime NBC4 Weathercaster Fritz Coleman.

Those visiting The Wishing Tree are encouraged to post photos and video using #NBC4You.  Updates and a schedule of the Holidays at Universal CityWalk can be found at www.CityWalkHollywood.com as well as on CityWalk’sFacebook- Universal CityWalk Hollywood, Twitter and Instagram @CityWalkLA.Viewers can tune in to NBC4’s Today in LA at 4:30 – 7 a.m. and News at Noon, and follow @NBCLA on Facebook and Instagram for highlights of the surprising moments.

“NBC4 is pleased to collaborate with our family at Universal CityWalk on The Wishing Tree and inspire a tradition of giving during the holidays,” said Steve Carlston, President and General Manager of NBC4 Southern California.  “The Wishing Tree aligns with the station’s legacy of supporting the community through several philanthropic initiatives.”

In addition to The Wishing Tree, Universal CityWalk will ring in the season with a wintertime transformation from Friday, November 28, 2015 through Friday, January 1, 2016.  A spectacular 40-foot tall Christmas tree will glisten with 200,000 LED icicles choreographed to the lights and sounds of the season in the “5 Towers” plaza, plus Santa Claus will make nightly appearances and offer special photo opportunities. Each evening, snow falls hourly at the heart of CityWalk. Admission to Universal CityWalk is free.

David Yeh
A long time fan of both Disney and Star Wars, he has a hard time resisting the temptations of Disney’s merchandising force. If you see pictures of the toys and pins, you can bet they are from Dave, our resident collecting guru.
Read more from David Yeh
Tags: Universal Studios Hollywood
Loading Comments...