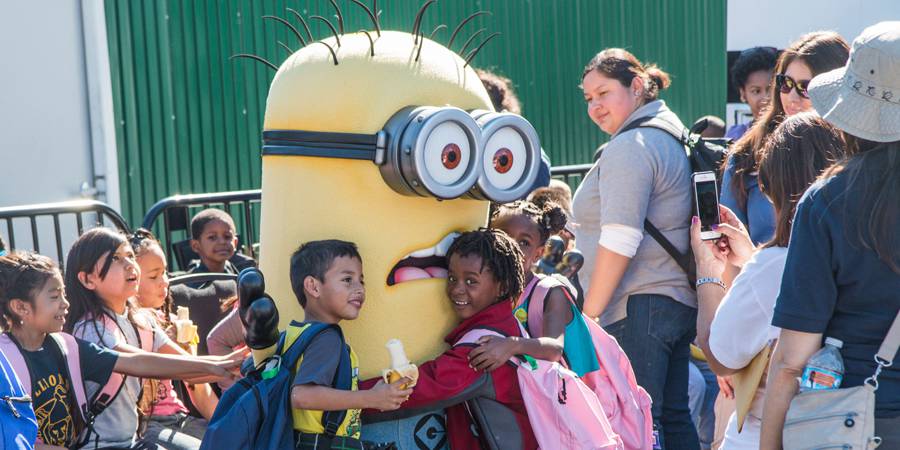 Universal City, California, November 6, 2015 – Hundreds of Universal Studios Hollywood’s employee volunteers and a medley of Minions from the theme park’s popular “Despicable Me Minion Mayhem” ride will band together to pay it forward and give back to six LA-based non-profit community organizations as The Entertainment Capital of L.A. marks its 11th annual “Day of Giving” on Thursday, November 12, 2015.

The inspirational “Day of Giving” event is Universal Studios Hollywood’s yearly tradition designed to connect employees with diverse community organizations, many of which are beneficiaries of the company’s philanthropic foundation, Discover A Star, whose mission is to empower individuals and families to lead more productive and fulfilling lives.

As part of this year’s special event, Universal Studios Hollywood will again serve as home base for Operation School Bell, hosting 250 homeless children from over 20 LAUSD elementary and middle schools. After the children are treated to new clothing, sneakers and school supplies, they will accompany volunteers for an afternoon of fun at the theme park that includes experiencing the popular “Despicable Me Minion Mayhem” ride, the “Super Silly Fun Land” play zone, and the world-famous Studio Tour which now features the blockbuster thrill ride, “Fast & Furious – Supercharged” as the epic grand final of the signature ride.

David Yeh
A long time fan of both Disney and Star Wars, he has a hard time resisting the temptations of Disney’s merchandising force. If you see pictures of the toys and pins, you can bet they are from Dave, our resident collecting guru.
Read more from David Yeh
Tags: Minions, Universal Studios Hollywood
Loading Comments...