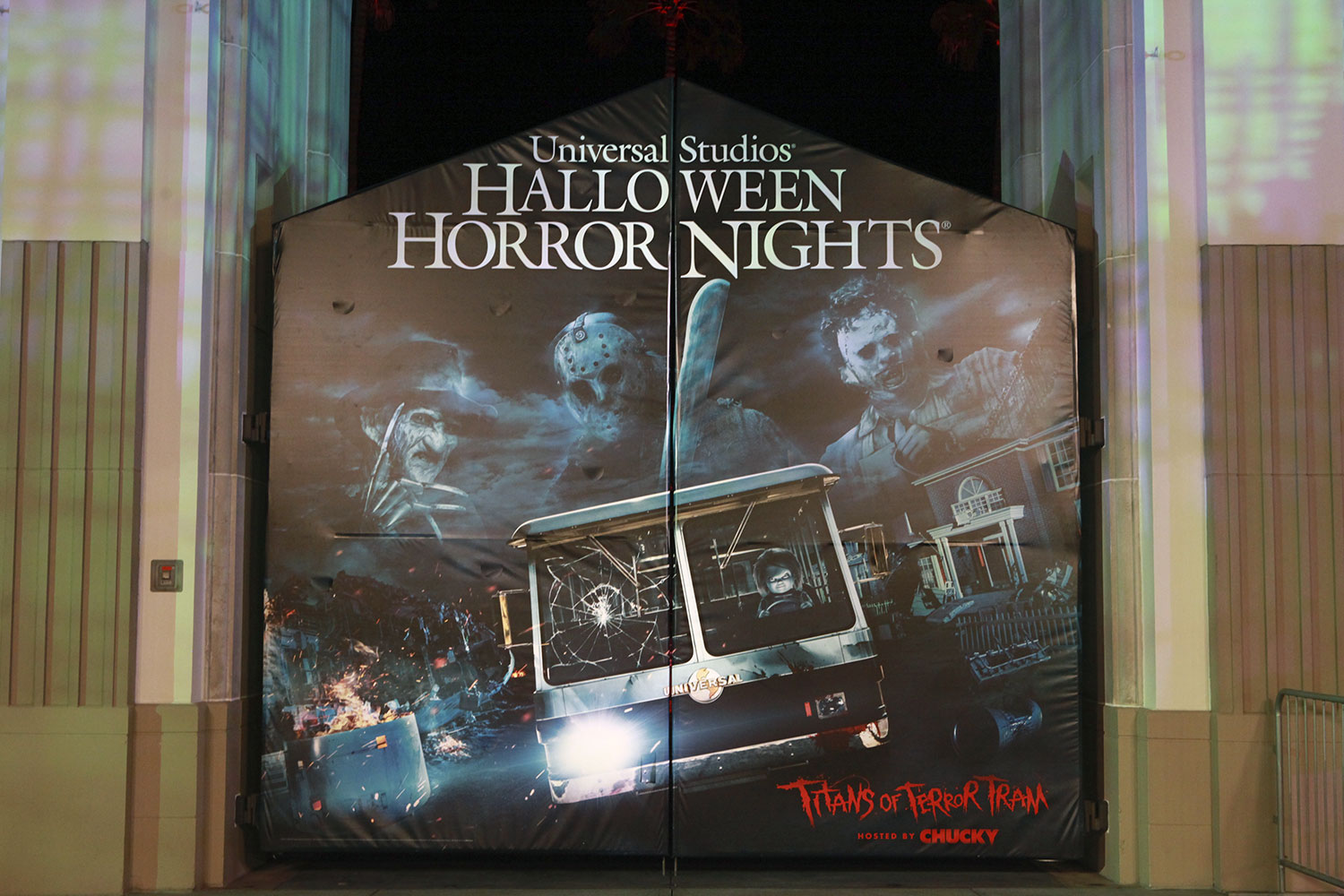 Universal Studios Hollywood (and Orlando) kicked off the Halloween festivities this past weekend with the annual tradition of Halloween Horror Nights, bringing mazes and scares on select nights through November 4, 2017. Universal is boasting more mazes than ever this year, featuring such hot horror properties as:

If you’re relatively new to the haunt-type events surrounding Halloween, it’s been getting bigger and bigger ever year, especially with Knott’s Berry Farm, Six Flags Magic Mountain, The Queen Mary, Universal Studios Hollywood, and many more venues creating unqiue experiences. For Universal’s, it’s one of the things to do, especially if you’re into branded horror entertainment (Knott’s Berry Farm does a great job making unique maze experiences). Event hours on select nights are from 7pm – 2am, and in addition to the nine maze experiences, you can also ride The Simpsons Ride, Jurassic Park in the Dark, Revenge of the Mummy The Ride, and Transformers The Ride-3D. Unfortunately the Wizarding World of Harry Potter, a world full of witches, magic, and Pumpkin Juice, is not available during Halloween Horror Nights.

Scarers start your evening right off the bat…

Lines for the mazes do get long real quick and if you don’t have a Front of the Line Pass, you should consider getting one as they sell out days before the event. It may cost extra but you’ll be able to enjoy all of the entertainment provided by the park.

The Titans of Terror Tram takes you onto a remote section of the backlot (War of the Worlds set area) and brings you face to face with more Chucky dolls than one should care to see!

Jason Voorhees, Freddy Krueger, and Leatherface all have their own sections in the lengthier walk through.

The lower lot has mazes like Insidious, which commands some of the longest waits of the entire night. You can also experience The Shining, which is a favorite of many, but leaves a few others out in the cold…

Accessing the TOXIC TUNNEL will lead you to the New York Backlot area where you’ll find American Horror Story, SAW, and Ash vs Evil Dead.

Back on the upper lot you’ll find The Walking Dead Attraction and the very fun Horrors of Blumhouse, as well as the Jabbawockeez dance group.

If you’re into horror, Halloween Horror Nights is a fun way to spend your nights leading up to Halloween.. Or even after Halloween! If seeing fake chopped up body parts isn’t your thing, this may not be for you.

Tickets to this year’s event are available for purchase at www.HalloweenHorrorNights.com/Hollywood. Advance purchase is recommended as event nights will sell out for all ticket options, including the all-new R.I.P. Tour, the After 2 p.m. Day/Night Combo Ticket, the Frequent Fear Pass and must-have Front-of-Line ticket. Guests electing to purchase the After 2 p.m. Day/Night Combo Ticket can enjoy the park’s popular daytime attractions such as “The Wizarding World of Harry Potter,” “Despicable Me Minion Mayhem” and “Fast and Furious—Supercharged” on the world-famous Studio Tour by day, then step into the mazes and attractions located throughout the park to experience the terror of “Halloween Horror Nights” for one admission price.

The ever popular Frequent Fear Pass allows fans, who just can’t get enough of “Halloween Horror Nights,” to visit multiple times throughout the run of the event. The in-demand Front-of-Line ticket to “Halloween Horror Nights” is also available enabling guests to enjoy one-time priority access to all the mazes, attractions, the all-new Terror Tram experience and new Jabbawockeez hip hop dance performance.

David Yeh
A long time fan of both Disney and Star Wars, he has a hard time resisting the temptations of Disney’s merchandising force. If you see pictures of the toys and pins, you can bet they are from Dave, our resident collecting guru.
Read more from David Yeh
Tags: Universal Halloween Horror Nights
Loading Comments...